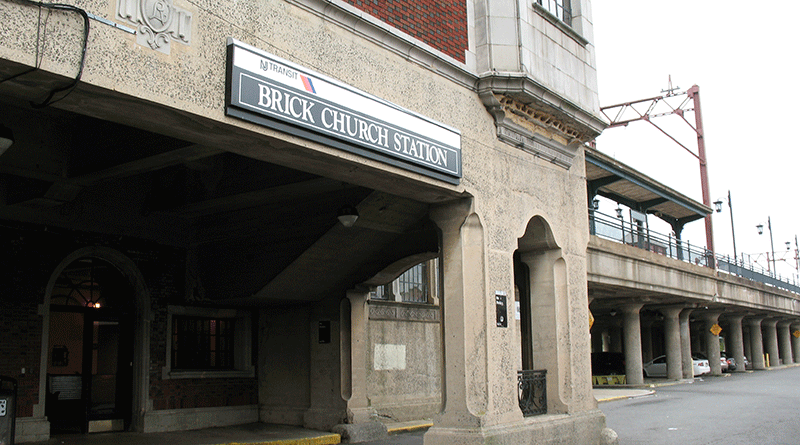 East Orange was once a bustling commercial and residential community, boasting an affluent population who enjoyed the city’s location as a first-ring suburb. The city was home to insurance and financial services firms, as well as Upsala University which closed in 1995. Among its surviving assets is the city’s accessibility to transit with two rail stations located one mile apart on the Morris & Essex Line, Brick Church and East Orange. On this rail line, local residents can quickly reach employment centers in Morristown, Newark and the Hoboken/Jersey City waterfront, as well as midtown and lower Manhattan. Brick Church, which is used by about 1,400 riders a day, is advantageously positioned with six Midtown Direct trains daily providing a one-seat ride in less than half an hour to New York Penn Station. Using these stations as a resource, East Orange leaders hope the city will rebound as a place to live, work and play.

Significant efforts are underway to bring new life to the area near the Brick Church station. A major sign of progress has been the recent demolition and remediation of a site, abandoned and vandalized since the 1990s, directly across I-280 from the station. First, the city demolished obsolete mid-rise office buildings dating from the 1960s having first assembled the parcels; this was completed in March 2008. A subsequent environmental cleanup was certified in August by the NJ Department of Environmental Protection as meeting residential standards.

The city is currently completing negotiations with Evergreen-Halsted Associates LLC for a planned mixed-used development to be built on this property near Brick Church station. Evergreen Crossing is to be the flagship project of the larger Evergreen District redevelopment effort. When completed, Evergreen Crossing will house 250,000 square feet of retail space, a 140-room hotel, 150,000 square feet of office space and 120 condominiums, with about 1,500 shared parking spaces (including commuter parking) on the 2.14-acre site. The estimated value of the project is $150 million. The first phase of the project will focus on the construction of the retail and parking uses, to be located in the lower levels of the structure. Once the base of the building is substantially complete, work will begin on the building’s other uses. The developer estimates that the retail and parking will be available for use within three years, with the hotel to follow.

Changes are also coming to the area near the East Orange station. Located a half-block from the East Orange station and close to city hall, the newly constructed Cicely Tyson School of the Performing Arts will be completed in May 2009 and will open to students the following September. The magnet school provides a course of study to students in the 6th through 12th grades in fine and performing arts (Writing, Music Production Studio/Technical Theater, Music, Dance, Drama and Fine Arts). The new school building was specially designed for the teaching of the arts and will house professional quality facilities, including 400- and 800-seat theaters that will be used for community events and other productions during non-school hours. The city plans for this new asset to anchor a nascent arts district near the East Orange station. While planning for community use has not been finalized, city officials offer that the space will be professionally staffed, so as to make good use of the theaters and to provide a full program of performances and events. Proximity to the rail station could contribute to wider use of the theaters.