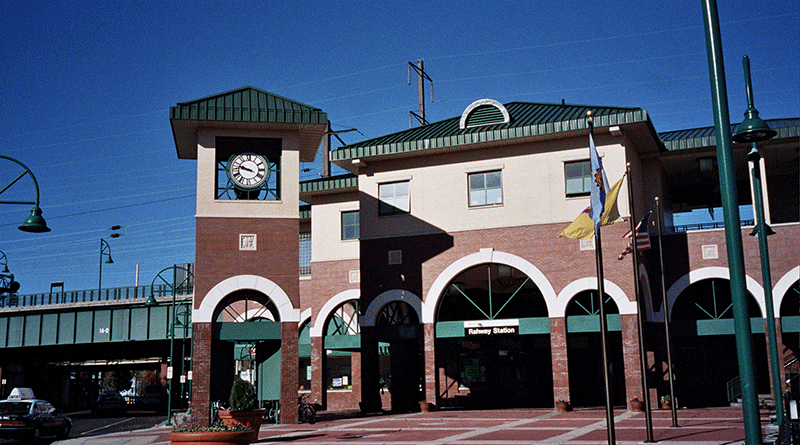 Despite the real estate market downturn, Rahway’s redevelopment efforts continue apace. Over the past several years, the city has undertaken an intensive effort to attract new residential and commercial development to its downtown. This is a result of years of work on the part of local government, the Rahway Redevelopment Agency, NJ TRANSIT and other state agencies. (For more information about Rahway’s past redevelopment activities, please see articles in our May 2005, May 2006, and July 2007 issues.)

The catalyst for development in the station area was NJ TRANSIT’s 2006 renovation to the station and to the plaza located to the southeast. The plaza, besides being a welcoming entrance to the station, serves as the city’s center—a place to gather, enlivened by the weekly farmers market, as well as fairs and musical events. Situated where the Northeast Corridor (NEC) and North Jersey Coast Line meet, the station at Rahway allows residents to reach midtown Manhattan in about a half hour or the Jersey Shore in an hour. More than 3,200 passengers boarded trains at the station each weekday (FY08).

The most striking new development, just to the east of the station plaza, is Silcon Group’s project, Carriage City Plaza, which opened its doors this August. Since its start in 2005, the 16-story, 385,000-square foot tower makes good use of its site and the opportunities afforded by intensive mixed-use development. In this case, mixed-use combines hotel, retail, and residential uses. The Indigo Hotel at Skyview is a 102-room hotel that is part of the Indigo boutique hotel chain. The hotel was the first of the brand to open in New Jersey—a second Indigo hotel opened in Basking Ridge one week later. The hotel is marketed to business travelers as well as families, and focuses upon what might be called a “hip urban” customer base. The location of this facility is a selling point—easy access to Manhattan, Newark Liberty International Airport and the Jersey Shore. The NEC linkage to the airport enabled the hotel to sign an agreement recently with Northwest Airlines to house its flight personnel. The hotel offers business clients the use of two conference rooms. There are also plans for a day spa, leasing for which has yet to be finalized. As part of an ongoing effort to support TOD near stations, NJ TRANSIT and the Indigo Hotel are also providing promotional packages to guests of the hotel.

The building’s first and second floors will eventually house 21,000 square feet of retail space, a third of which is reserved for an upscale restaurant. The building’s first retail tenant, Cuppy’s Coffee, Smoothies & More, will open its doors this fall. Cuppy’s signed a lease for 1,400 square feet in June and is currently outfitting the space. Another tenant, a dry cleaner, has also leased space and is preparing to open. Ongoing negotiations for a restaurant are underway, but an announcement has not yet been made. The building’s owners are looking for a tenant for one additional retailer.

The remainder of the building is devoted to 209 condominiums—88 one-bedroom units and 121 two-bedroom units ranging in size from 800 to 1,200 square feet, as well as 13 penthouses. A majority of the units (130) in the property have already sold, with many of the commitments made shortly after the units were released for sale in January 2007. The one-bedrooms are priced from $285,000 to $315,000, depending on floor; the two-bedrooms range from $336,000 to $470,000. The penthouses have not yet been released for sale. Although the pace of sales has noticeably slowed with the downturn in the market, prices have remained unchanged and there are no plans to convert the unsold units to rentals.

Condo buyers started moving in mid-August. About ¾ of the residents are young professionals, the rest “empty-nesters.” An informal tally of residents indicates that more than half use rail to travel to work. When purchasing the units, each buyer had the option to rent one parking space in the adjacent Rahway Transit Center parking garage, an option that most have chosen to use. While many of the current owners do not use the spots, they feel the need to maintain the spot for a future owner.

Two blocks to the west of the station, the Park Square project is also under construction. This mixed-use residential and retail project is in the city’s newly formed arts district, midway between the station and the recently renovated Union County Performing Arts Center (see below or sidebar). Landmark Properties is responsible for the project, which will feature 159 one- and two-bedroom rental apartments in a pair of four-story buildings. A unique feature to the project’s design is the introduction of a new street through the center of the site which enables each of the project’s units to have street frontage. The design of this new internal street will feature a landscaped roundabout that will ease traffic flow within the site.

Covered ground-level parking for apartment tenants is located behind the retail spaces. These luxury rentals feature many amenities including nine-foot ceilings and unique layouts, ranging in size from 800 to 1,480 square feet. Occupancy is scheduled for early 2009. Landmark undertook cleanup of the site, which once housed a gas station, as well as a bank, hardware store, boarding house and thrift shop. This cleanup was completed in late 2007. The Park Square Project will benefit from a Payment in Lieu of Taxes (PILOT) agreement between Landmark and Rahway which allows for a 20 percent abatement for five years.

Theater-goers are enjoying the recently completed renovations to the Union County Performing Arts Center (UCPAC). The UCPAC offers a wide variety of dramatic and musical theater, concerts, dance and children’s performances. Located about a third of a mile from the station, the Art Deco building has received a complete restoration of as well as a new 7,500-square foot, two-story brick addition that provided room for a rehearsal hall, dressing rooms, administrative services, and additional stage space. The $5.9 million renovation project also included the installation of central air conditioning in the 80-year old facility—allowing year-round use for the first time this summer—enhancements to other mechanical systems and an enlarged, enclosed loading dock. For more than a decade, the UCPAC has partnered with Union County. This partnership was advanced when the county purchased the building for $1.3 million in June 2006. Union County will maintain ownership of the building and provide financial support to the center, while UCPAC operates the facility. The City of Rahway has made a commitment to the center’s operating budget, contributing about $300,000 annually. This fall, the UCPAC will begin its first full schedule utilizing its newly outfitted quarters. The UCPAC draws nearly 40,000 patrons each year.

December 20, 2012 Steph_Admin Comments Off on Transportation and Health: Policy Interventions for Safer, Healthier People and Communities

Measuring the Effectiveness of TDM: A Review of the Arlington County Residential Building Study

October 30, 2018 Stephanie DiPetrillo Comments Off on Measuring the Effectiveness of TDM: A Review of the Arlington County Residential Building Study