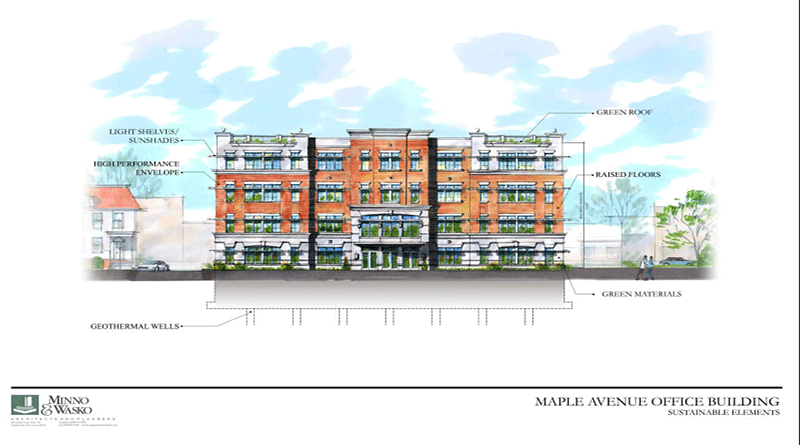 Downtown Morristown will soon see the completion of two mixed-use projects. The Highlands at Morristown is a redevelopment project at a former NJ TRANSIT parking lot, opposite the station on Lafayette Street. The redevelopment of the Epstein’s Department Store site on the Morristown Green, is about a half-mile from the station. Each development should attract new residents to Morristown’s center, within easy walking distance of shops and the train station. The Morristown station area was designated a New Jersey Transit Village in 1999, one of the first station areas named as part of the NJ Department of Transportation program. Morristown is served by NJ TRANSIT’s Morris & Essex Line with 24 direct trains daily to Penn Station New York and 15 departures to Hoboken Terminal for connecting PATH service to lower Manhattan. More than 2,200 people board at the Morristown station each weekday, many of whom travel to Manhattan in a little over one hour.

Rosewood Lafayette Commons LLC broke ground on the Highlands at Morristown in mid-January. Scheduled for completion in 2010, the project will replace the parking lot with a five-story, mixed-use building containing 228 one- and two-bedroom luxury apartments as well as 8,000 square feet of service-oriented, ground-floor retail and 6,000 square feet of amenity space (clubhouse, fitness center and swimming pool.) The Highlands at Morristown will feature shared parking—a five-story parking garage providing 722 parking spaces for commuters, tenants, and shoppers. When completed in summer 2009, the parking garage will provide 40 percent more parking for commuters than was available in the surface lot that it will replace. During the construction, displaced commuters have traveled by complimentary shuttle from a nearby parking garage. Those parking in the garage will have weather-protected access to the new building as well as the train platform. The garage will be screened from the street, except for a glass elevator and stairs that connect to the train platform.

In 1999, the Morristown Town Council amended its zoning ordinance to allow mixed-use transit-oriented development on this site. The final plan for the site was approved in January 2005. In March 2006, the NJ TRANSIT Board of Directors approved an agreement with Rosewood for developing the site, which is also known as the Highlands Transit Village. The developer agreed to buy the NJ TRANSIT property and NJ TRANSIT agreed to contribute $1.75 million to the projected $8.75 million cost of the parking garage. In addition, NJ TRANSIT is to own and operate 415 commuter spaces, retaining necessary easements and rights-of-way. The agency will also collect six percent of the gross proceeds from any future sale or refinancing of the residential and retail portions of the project.

Another project of note is the redevelopment of the Epstein’s Department Store site. Located on the Morristown green and less than a half-mile from the Morristown train station, the Epstein’s project will feature an 800-space parking garage, three mixed-use residential buildings and an office building when completed in 2010. The first part of the project, the DeHart Street Garage, opened in October 2008. The parking structure has been designed to be screened from the street by the other buildings on the site.

The 40 Park building is planned to be the first of the mixed-use residential buildings to be completed. It will contain 80 two- and three-bedroom luxury condominiums ranging in size from 1,200 to 3,000 square feet. Half of the units have already been sold and will be available in the first quarter of 2010. The Metropolitan, a second mixed-use building, will be available shortly after 40 Park. This building will feature 130 one- and two-bedroom high-end rental apartments ranging in size from 750 to 1,750 square feet. The third building will contain 36 industrial-style lofts. All three buildings will incorporate retail uses on the ground and lower levels. Also part of this effort, 18 townhouses will be developed on Maple Street across from the Epstein’s site.

The office building, will contain 20,000 square feet of general office space and is scheduled for completion by the end of 2010. The space will be occupied by offices of the Morristown Parking Authority, the Morristown Partnership, the Geraldine R. Dodge Foundation, the Fannie E. Rippel Foundation, the Arts Council of the Morris Area and The Seeing Eye, which will use the basement as a training area for its dogs and to house 18 of its vans. The building will be “Platinum” certified by Leadership in Energy and Environmental Design (LEED), featuring geothermal wells, a green roof, and the nations’ largest living wall, a system of vegetated panels integrated into the building’s structure. The building will draw a portion of its energy from solar panels on the garage roof.

The redevelopment of the 3.5-acre Epstein’s site is the work of Morristown Epsteins, LLC, a joint venture of Woodmont Properties, Roseland Property Company and Epstein Land Company. In 2004, Morristown Epsteins was named redeveloper of the site. Demolition of nine derelict structures on the site began in November of that year. In 2005, Morristown adopted a redevelopment plan authorizing mixed-use development. Environmental remediation was required to address several underground storage tanks that were found.