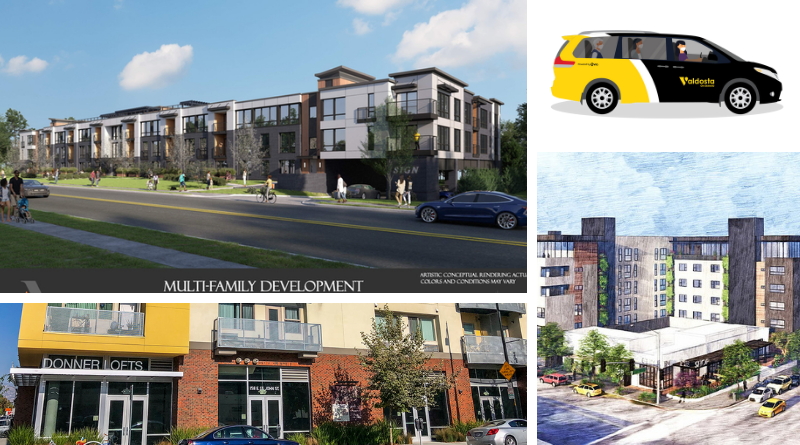 What Big Cities Can Learn from the Rural US about Public Transit
Scott James Matheson and Sam Couvillon, Smart Cities Dive, April 6, 2022

With a large number of zero-car households and limited public transportation, residents and leaders in the nation’s rural counties were already experiencing the fragility of transportation networks prior to the pandemic. New innovations, however, are transforming transit services in rural areas. Valdosta, Georgia, a city of fewer than 60,000 residents, launched Valdosta On Demand, its first-ever, citywide on-demand public transit service. Since its inception, the initiative has received over 14,000 ride requests per month with 45 percent of riders using the service to go to work or school. With the success of such programs, the federal government has recognized “on-demand mobility services” as eligible for funds from the new bipartisan infrastructure law that will provide $300 million this year alone via its Rural Surface Transportation Grant Program.

MICHIGAN—MAX Transit to Start Charging for Rides in May
Carolyn Muyskens, The Holland Sentinel, April 5, 2022
After providing fare-free rides for two years, Macatawa Area Express (MAX) Transit announced that it would start charging its passengers. Prior to the pandemic, passenger fares generated about $300,000 in annual revenue. The agency is still recovering from a drop in ridership, which as of February 2022 stands at 19,675, much below the 35,768 rides provided in February 2020. In fall 2020, the MAX Transportation Authority Board voted to raise fares by 15 percent, its first increase since 2006, and in March 2022 the board voted to start charging seniors and ADA passengers 50 cents for fixed-route bus rides.

UGANDA—Covid Shutdowns Exposed Flaws in Uganda’s Transport System: How to Fix Them
Astrid R.N. Haas, Bizcommunity.com, April 5, 2022
Uganda’s Covid-19 travel restrictions have helped measure and understand the direct impact transportation has on carbon emissions, air pollution, and the livelihoods of residents, especially those living in Kampala. With air pollution levels among the highest in the world, Kampala witnessed significant improvement as result of the lockdowns: air quality index measurements showed improvements between 40 and 60 percent. Kampala residents rely on privately-owned boda-bodas (motorcycle taxis) and mini taxis for transportation, which contribute to the country’s carbon emissions and climate change. The pandemic has exposed the fragility of the system and the influence transportation bears on livelihoods, especially for the most vulnerable communities. Before the pandemic, low-income city residents spent nearly 40 percent of their income on two trips per day.

MORRISTOWN—$28.48m Loan Secured for Morristown Multihousing Development
Linda Lindner, roi-nj.com, April 5, 2022
The Hampshire Cos. secured $28.48 million for the construction of an 85-unit apartment complex in Morristown. Located at 175 Morris Street, the proposed community is less than a five-minute walk from the Morristown Station, which provides direct access to New York Penn Station via NJ TRANSIT’s Morris & Essex Line. The four-story property will feature a fitness center, coworking space, and a 610 sq. ft. café.

WESTFIELD—Westfield Planning Board OKs 40 Housing Units on 1.6 Acres
Matt Kadosh, TAPintoWestfield, April 5, 2022
The Westfield Planning Board has approved plans to build a 40-unit building on a 1.62-acre site on North Avenue, which includes three floors of housing and 80 parking spaces. Following changes to the developer’s plan, the board approved the application by Adoni Property Group LLC for 34 market-rate units and six affordable units at 526 North Avenue East. Among the changes suggested, the developer agreed to reduce the initial 40-foot setback that was proposed to be 25 feet to facilitate the placement of a fire engine in case of a fire. Construction of the building is anticipated to take 16 months.

JERSEY CITY—The Hampshire Cos. JV Lands $105M for Jersey City Community
Olivia Bunescu, Multihousing News, April 1, 2022
A joint venture between The Hampshire Co., Claremont Development, and Circle Squared has secured $105 million in refinancing for Rivet and Rivet 26, a two-building community complex in Jersey City, totaling 362 residences. Located at 23 and 26 University Place Blvd., Rivet and Rivet 26 comprise two five-story buildings with studio, one- and two-bedroom units. The transit-oriented community is within walking distance of the West Side Avenue Light Rail station and other retail options and green spaces. The property is also in close proximity to the New Jersey City University campus.

CALIFORNIA—Universal Basic Mobility Program in Oakland, California, Provided Lessons in Achieving Equity, Leveraging Community Partnerships
Austyn Gaffney, Smart Cities Dive, April 6, 2022
The Oakland Department of Transportation (OakDOT) has piloted a yearlong universal basic mobility program designed to increase transit, walking, biking, and shared mobility across the city. According to a program evaluation, the pilot has been successful in reaching low-income participants of color. In a mid-program survey, 40 percent of participants said they have changed how they travel, with 23 percent saying they drove alone less often. In a conversation with Smart Cities Dive, OakDOT Transportation Planner Quinn Wallace noted that the program was designed to prioritize equity and not solely target individuals who own a car.

MASSACHUSETTS—Spring House Hunt: Would an Expanded East-west Rail System Put the State on a Path to More Affordable Housing?
Cameron Sperance, RealEstate Boston, April 6, 2022
The Massachusetts Department of Transportation and Amtrak are working on a plan that could improve service between Boston and the western part of the state. According to A Better City, a nonprofit focused on transit equity, better connections between Central and Western Massachusetts and the urban core of the eastern part of the state will help ease congestion and curb the housing price rise in Greater Boston. According to Bob Yaro, president of the North Atlantic Rail Alliance, if the services are fast, frequent, reliable, and well-priced, it could mean that Central and Western Massachusetts get pulled into the Greater Boston commuter housing market, labor force, and labor market.

MARYLAND—Baltimore Accelerator Will Focus on Black and Latina Women
Hadassah Patterson, Next City, April 5, 2022
A new initiative headed by the Latino Economic Development Corporation (LEDC) is striving to bolster the number of real estate firms led by blacks and other minority groups in some of Baltimore’s marginalized communities. LEDC, through its POWER Collaborative (Prioritizing Our Women’s Economic Rise), is working with local CDFI Baltimore Community Lending, Baltimore City, and other civic and community leaders to build a continuum of wealth and long-term stability for Black and Latina women via real estate, small business, and workforce development. POWER comprises three accelerators: small business incubators, grant funding to develop affordable housing, and skill training in high-growth sectors. The collaborative will train 180 entrepreneurs, have 51 women start new careers, and redevelop 20 vacant houses. A key goal of POWER is to create affordable homeownership opportunities in three-story rowhouses and to utilize some of Baltimore’s 15,000 vacant units and lots. It aims to list properties on the market at a price that current community residents can afford. In return, the community benefits from a vacant or blighted house being put back on the market.

WASHINGTON D.C.—Metro Launches Plan to Partner with Developers, Build Transit-Oriented Sites
Glynis Kazanjian, ABC News, April 7, 2022
The Washington Metropolitan Area Transit Authority (Metro) announced its plan to use agency-owned land to create new housing and business projects in transit areas. Metro hopes that the new plan will result in increases in ridership and revenue, and an expanded tax base for the state and local governments. Metro plans to collaborate with private developers over the next 10 years to execute 20 agreements for projects at 40 stations. The agency intends to develop 31 million sq. ft. in new space, including 26,000 new residential units, generating a nine million increase in annual Metro trips, and bolstering revenue of $40 million in annual Metro fares. In addition, Metro anticipates $340 million in new annual tax revenue and $50 million in annual lease revenue.

CALIFORNIA—Transit-Oriented ‘Boutique’ Apartments Coming to North Park
Ray Huard, San Diego Business Journal, April 6, 2022
Malick Infill Development and partners in North Park have broken ground on a new boutique residential community called Oregon. The $35 million project comprises 94 small dwelling units and is located at 250 Oregon St., the southwest corner of El Cajon Boulevard and Oregon Street. Five apartments will be designated as affordable for people with annual incomes of 30 to 60 percent of the median income. With four bus rapid transit stops within walking distance, Oregon will feature a transit-oriented lobby with a digital display showing bus routes and the bus schedule. The project will have limited parking spaces but will provide a bike room that can house about 80 bicycles, encouraging residents to get by without a car.

CALIFORNIA—Homeowners Have 40% Lower Transportation Costs Living Near Mass Transit
According to a study by the Mineta Transportation Institute in partnership with California universities and other organizations, homeowners in transit-oriented development zones in California’s major metropolitan areas on average spend 40 percent less on transit expenses than other households. The report indicates that two-thirds of their savings can be attributed to living in a transit-friendly neighborhood and one-third to access to rail transit, implying the importance of integrating a rail transit system with supportive land use planning and neighborhood design. The study evaluated the impacts of TODs by breaking down household transportation expenses into three cost buckets: auto ownership, auto operation, and transit. The report revealed that TOD households save about $1,232 per year on transportation costs, which accounts for 18 percent of their total annual transportation costs.

TEXAS—Plano Study Highlights Opportunities for Development Around Dart Silver Line Stations
Erick Pirayesh, Community Impact, March 30, 2022
A study commissioned by the City of Plano highlights opportunities for development around DART Silver Line stations. DART will construct a commuter rail route connecting Plano to the Dallas Fort Worth International Airport, adding 10 new stations. Two of the stations, the Shiloh Road Station at 1101 Shiloh Road and the 12th Street Station at 1180 12th Street, will be in Plano. The study defined a one-mile circle around the two future stations to identify suitable redevelopment sites. The survey identified that 95 percent of all potential redevelopment sites were within proximity of the 12th Street Station. According to the report, townhomes and apartment complexes with four to five stories were ideal for development in the area.

CANADA—New Legislation to Allow BC Government to Buy More Land Around Skytrain For Housing
Kenneth Chan, Urbanized, April 5, 2022
Rob Fleming, British Columbia (BC) Transportation Minister, introduced changes that will enable the BC Transportation Financing Authority to acquire land for the purpose of building housing and community amenities near transit hubs. The amendment will allow mixed-use developments, including housing and community amenities to be built as an integral part of the public transit system. The policy changes will help improve housing affordability and increase public transit ridership. In the City of Surrey, the Fleetwood Station Plan calls for an additional 100,000 residents and 15,000 jobs near the three SkyTrain stations.

INDIA—L&T Metro Rail Hyderabad: Winning with Transit Oriented Development and Retail
Sandeep Kumar, Indiaretailing.com, April 1, 2022
Developers L&T cite transit-oriented development as an intrinsic part of its ongoing Hyderabad Metro Rail Network project, which encompasses about 69.2 km of rail and 57 stations along three corridors. The L&T Metro Hyderabad Rail TOD sites fall under two categories: Parking and Circulation (P&C) and Depots. The P&C sites include 6 million sq. ft. in new development near the rail corridor. Depots are located at Miyapur, Falaknuma, and Nagole, and will add 12.5 million sq. ft. in new development. The developers believe the new development will transform the City of Hyderabad.