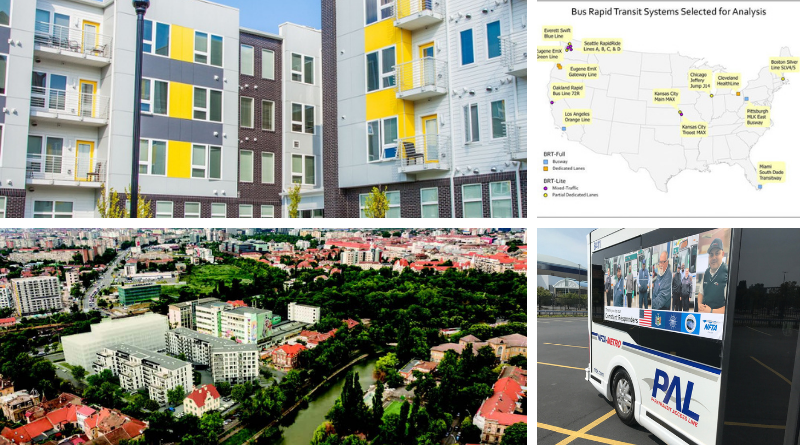 While there is still much uncertainty about the impact of the pandemic on settlement patterns and travel behaviors, one effect seems clear—those who can work from home have less need to live close to their workplaces. Many also see evidence of increased demand for larger homes to accommodate telework and rising rates of suburbanization. Despite this uncertainty, some homebuilders have increased the construction of single-family homes in low-density areas. According to Brookings’ researchers however, pandemic-induced changes, whether a short-term blip or a longer-term pattern, should not distract planners from addressing ongoing needs, such as increasing the supply of smaller, affordable homes in compact, climate-friendly development patterns. To promote equitable, higher-density, transit-oriented development, suburban retrofits, and urbanization need to be incorporated into suburban planning.

How Did Public Transportation Affect COVID’s Spread?
Jason Maderer-Georgia Tech, Futurity, April 14, 2022
New research shows that cities with high public transportation usage displayed higher COVID incidence rates at the beginning of the pandemic. Looking at the nation’s 52 largest metropolitan areas, researchers compared transit ridership and COVID cases from January 22 to May 1, 2020, relating data from the Federal Highway Administration’s National Household Travel Survey and Johns Hopkins Center for Systems Science and Engineering’s dashboard. The association between ridership and COVID rates remained statistically significant even when data from transit-friendly New York City was omitted. Although the researchers do not assert that transit was the sole cause of high pandemic incidence rates, they say it could have played a role early in the epidemic.

21 States Sue to Stop Covid-19 Face Mask Mandates on Airplanes, Public Transit
Bruce Y. Lee, Forbes, April 10, 2022
Attorneys general for 21 states have filed a lawsuit against the U.S. Transportation Security Administration (TSA) face mask mandate for public transit users, which was scheduled to expire on April 18th. Although several studies indicate that mandating face mask use in public has been associated with declines in the daily Covid-19 growth rates, Florida Governor Ron DeSantis claimed lack of scientific evidence as the reason for legal action against the mandate. A recent study published in The Lancet Public Health showed how maintaining face mask use until reaching certain vaccination coverage levels could end up saving the U.S. billions of dollars.

NORTH BERGEN—Skyline Development JV Lands $63M for Northern NJ Condo Project
Olivia Bunescu, Multi-Housing News, April 13, 2022
Skyline Development in partnership with Vasco Ventures has secured $63.2 million in financing for Solaia Condominiums, a 70-unit community in North Bergen, NJ. The developers are planning to recapitalize the 91,000 sq. ft. of remaining inventory located at 8701 Churchill Road next to the Hudson River waterfront. The proposed tower comprises one-, two- and three-bedroom floorplans, varying from 860 to 1,900 sq. ft. The transit-oriented community is in close proximity to bus and train stops connecting it to New York City and will offer residents access to Manhattan skyline views and bay views.

NEWARK—Cost of Renting a Home Is Skyrocketing in Newark Metro Area: Study
Eric Kiefer, Patch Newark, NJ, April 7, 2022
According to a study by Redfin.com, the Newark region ranked fourth highest on the list of “Top 10 Metro Areas with Fastest-Rising Rents Year Over Year.” The Newark metro area witnessed a 35.7 percent increase in its average monthly asking rent since last year, compared to the national average 15 percent increase to a record high of $1,901 a month. “When the cost of homeownership increases, many potential homebuyers opt to rent instead, which drives up rental prices,” Redfin’s Chief Economist, Daryl Fairweather, said. According to recent statistics, only 22 percent of residents in Newark own their homes. Officials estimate that about 59 percent of Newark “cost-burdened” renters spend more than a third of their income on housing.

FLORIDA—St. Petersburg’s 22nd Street S Corridor is ‘Where the Growth is Happening’
Colleen Wright, Tampa Bay Times, April 12, 2022
Community leaders gathered to hear the latest on the planned renaissance of St. Petersburg’s former center of Black culture and entertainment. Veatrice Farrell, executive director of The Deuces Live, said that the 22nd Street South corridor has not always been vacant land and noted the project’s potential for redevelopment. There are about 13 identified construction and redevelopment projects underway along the corridor, and the leaders behind five of them talked about their endeavors. The St. Petersburg City Council will meet on April 21st to vote to accept the SunRunner Rising Study, which assessed potential mixed use, transit-oriented development along the route and recommended supportive land development regulation.

MARYLAND—For Maryland Purple Line, $1.76B TIFIA Loan
Marybeth Luczak, Railway Age, April 12, 2022
The U.S. Department of Transportation announced that it will provide up to $1.76 billion in loan funding to support construction of the Purple Line in Maryland via the Transportation Infrastructure Finance and Innovation Act (TIFIA). The loan will finance up to a third of the $5.9 billion in eligible project costs of the 16.2-mile, 21-station light rail project. The Maryland Department of Transportation Maryland Transit Administration is working under a Public Private Partnership (PPP) agreement with Purple Line Transit Partners to design, build, operate and maintain the light rail system for 35 years. Construction of the line began in 2017 with an expected opening in March 2022 , but litigation that was resolved in November 2021 delayed the project.

MISSOURI—Kansas City Looks to Enhance Transit-Oriented Development Along Prospect Bus Line
Celisa Calacal, NPR, April 14, 2022
The Kansas City Council approved a $500,000 contract to study reinvestment and development along the Prospect MAX bus route. Under the contract, Gould Evans, a Kansas City architecture firm, will prepare a plan for transit-oriented development along Prospect Avenue from 12th Street to 75th Street. The City received $400,000 from the Federal Transit Administration and will contribute an additional $100,000 to support the project. Prospect Transit Line stakeholders, including residents, business owners, and others, will be consulted as part of the project. In addition, the strategic plan calls for identifying ways to finance projects along the transit line. Reinvestment along the Prospect Avenue line will follow Kansas City’s Transit-Oriented Development Policy, which guides development along transit routes to promote density and incentivize mixed-use development.

CONNECTICUT—Norwalk Receives $6M Grant for Development Near Sono Train Station
Abigail Brone, The Hour, April 10, 2022
The City of Norwalk will receive $6 million in state funding as part of the Connecticut Community Challenge Grant Program to boost development in South Norwalk. The City, the Norwalk Redevelopment Agency, and Spinnaker Real Estate Partners will use the funds to upgrade property adjacent to the South Norwalk Station. The development will include at least 200 mixed-income residential units, 10,000 sq. ft. of commercial, a public plaza, and 60 off-street public parking spaces. It is part of Norwalk’s plans to redevelop vacant and underused lots.

CANADA—Nine Transit-Oriented Communities Planned Along Upcoming Ontario Line
Erin Nicole Davis, Storeys, April 12, 2022
The Ontario government announced a partnership with the City of Toronto and the private sector to develop nine transit-oriented communities along the forthcoming Ontario Line, which will include 15 stops. Amidst the housing crunch, the project aims to create affordable housing and increase economic opportunities by integrating housing, commercial space, and other amenities near transit lines. Notably, the agreement between Ontario and Cadillac Fairview for the development of a 38-acre transit-oriented community at East Harbour station. The project is expected to transform the site into a major employment center, creating nearly 50,000 jobs and housing about 7,000 residents. The development will include a requirement of 215 affordable rental housing units for a 99-year period, two childcare facilities, and a recreation center.

ROMANIA—SPEEDWELL Obtained the Building Permit for the First Residential Building of PALTIM
Deniza Cristian, Business Review, April 11, 2022
SPEEDWELL, the real estate developer, received the building permit for the first phase of the PALTIM project in the City of Timisoara. The proposed development will feature a mixed-use complex built according to Transit-Oriented Development principles, and will comprise premium apartments, offices, and retail spaces. The first phase will feature 123 apartments, while the second phase will add another 113 apartments, resulting in a total of 236 units. Considered an urban regeneration project, it will include the conservation of two historic buildings, a monument villa and a section of the former hat factory.