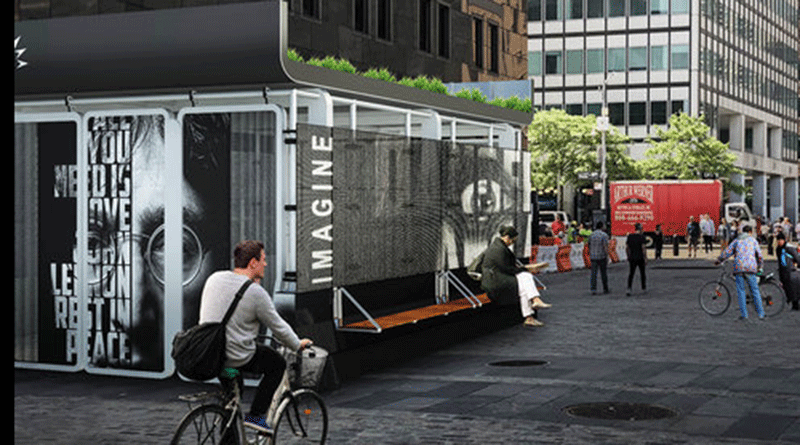 Rendering of an Oonee Pod, similar to the one placed in Journal Square, Jersey City. Image courtesy of the Oonee Company.

New Renderings Revealed for Jersey City’s West Side Square
Chris Fry, Jersey Digs, September 3, 2019
Altree Developments purchased a mixed-use development site containing six parcels at 1072-1075 West Side Avenue in Jersey City’s Marion neighborhood earlier this year. Presently, the PATH system’s tracks run through a section of the area directly adjacent to the development site. The Port Authority of New York and New Jersey will conduct a feasibility study, to be completed by December 2019, as part of a settlement agreement to examine the plausibility of adding a new PATH station to the neighborhood.

Jersey City Unveils Protected Bike Lanes
NJ Biz Staff, NJ Biz, September 4, 2019
On Wednesday, Jersey City Mayor Steven Fulop, city officials and members of Bike JC gathered for the unveiling of newly installed protected bike lanes. The City has installed over four miles of protected bike lanes as part of an effort to advance the goals of its Vision Zero initiative and Bike Master Plan. Senior Transportation Planner Barkha Patel has stated that this Vision Zero City is committed to making the streets safer for all, while providing active modes of transportation to support the City’s growing population.

Worried About Bike Theft? At Journal Square, You Can Park in a Pod
Caren Lissner, Jersey Digs, September 4, 2019
The Port Authority of New York and New Jersey recently signed an agreement with the Oonee Company to bring 20 secure bicycle parking spots located inside a “pod.” The pod, which was set up in August, is located in front of the Journal Square Transportation Center in Jersey City. Commuters who wish to park their bike in the pod must pay a subscription fee of a few dollars per month, by keycard or app, to reserve a space.

Woodbridge: Weekend Service, More Trains Coming to Avenel Station
By Carly Baldwin, Patch (Woodbridge), Sept 5, 2019
New development and economic growth near the Avenel Station in Woodbridge Township, and a renewed commitment at NJ TRANSIT to “Engage, Inform, and Improve,” has spurred the agency to expand service to the North Jersey Coast Line station. Recent development in the area includes the Station Village at Avenel, the Avenel Performing Arts Center, and improvements to the station.

One Thing We Can Do: Drive Less
By Tik Root & John Schwartz, The New York Times, August 28, 2019
Incremental changes in travel behavior can have an impact on the environment. For example, everyone driving just 10 percent less would result in a roughly 110 million metric ton reduction in carbon dioxide, or the same as taking about 28 coal-fired power plants offline for a year. Replacing short car trips—those less than two miles—with walking, biking or public transportation—is one effective way to achieve this goal.

Living with the Weather in a Time of Climate Change
David Sim, Next City, September 2, 2019
International research has validated the health benefits to our species that come with encounters with nature. Several cities have introduced, or restored, natural elements to their urban environments, resulting in increased interactions of their citizens with the outdoors and with each other. As the effects of climate change are experienced, some of these improvements are being built to manage stormwater runoff. Municipalities, urban planners, developers, policy makers and others can design the built environment to improve people’s understanding and experience of the climate.

MARTA Moves Forward with Transit-Oriented Development at North Avenue Station
Sean Keenan, Curbed Atlanta, September 3, 2019
On Thursday, JLL officials put out a request for proposals (RFP) seeking developers who have an interest in working on a signature tower project that would include direct multi-modal connectivity to MARTA’s rail and bus network via the North Avenue MARTA Station in Midtown. The project site is bordered by Ponce de Leon Avenue, West Peachtree Street, and North Avenue.

Harris Unveils Transit Vision 3.0 and Funding Plan
Linda A. Moore, Daily Memphian, September 4, 2019
On Wednesday, Shelby County Mayor Lee Harris walked the County Commission through Transit Vision 3.0, a plan to provide $10 million in funding to the Memphis Area Transit Authority (MATA). The plan for funding is heavily dependent on a sustainability fee paid by county residents who own more than two vehicles. The fee would be required of those with county addresses where three or more vehicles are registered, including commercial operations with fleets, and amounts to an additional $145 per year per vehicle. According to Mayor Harris, the proposed sustainability fee could be an opportunity to make a significant investment in public transit.

Metro, Mono Rail, Bus – Mumbai’s Wadala to Have It All
Aroosa Ahmed, Hindustan Times, Mumbai, September 4, 2019
The Mumbai Metropolitan Region Development Authority (MMRDA) has secured plans to build an 18.44-hectare multi-modal transport hub in Wadala. The development was incorporated into the final draft of the Comprehensive Transport Study (CTS) conducted by the MMRDA for the Mumbai Metropolitan Region (MMR). The transportation hub will be constructed in proximity to the Wadala monorail station and will comprise all public transport legs including Metro, Brihanmumbai Electric Supply and Transport (BEST) feeder buses, inter-city bus terminal and proposed harbor railway connectivity to Navi Mumbai.

Liverpool Announces Investment of £172 Million in Sustainable Public Transport
Intelligent Transport, September 4, 2019
Liverpool City Region Combined Authority has detailed how to distribute over £170 million across 18 schemes focused on transport and infrastructure projects in support of a more sustainable city. The schemes follow three primary themes: improving and expanding the public transport network to meet new areas of demand, improving the appeal of public transport over private transport, and intervening for health and well-being. Projects will include investment and development of new train stations and additional improvements to public transport services.

37-Storey Tower for Chatswood as It Strides Towards a New CBD
Su-Lin Tan, Commercial Real Estate, September 6, 2019
In August, the NSW Planning Department endorsed the Chatswood CBD Planning and Urban Design Strategy that would turn Chatswood into a bigger business district. Chatswood is one of the busiest sub-CBDs in Sydney with access to a metro station and a fast train. Private owners plan to sell the commercial building at 845 Pacific Highway—a step towards turning the structure into a 37-story office tower located just 320 meters from the train station.