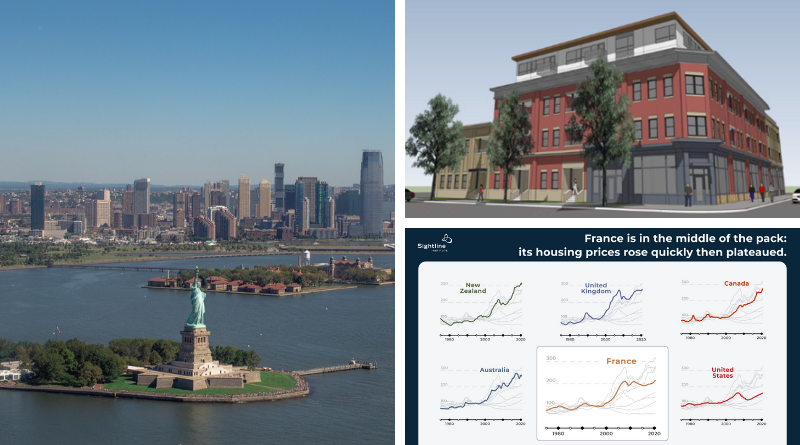 Where America’s Developed Areas Are Growing: ‘Way Off Into The Horizon’
Zach Levitt and Jess Eng, The Washington Post, August 11, 2021

An analysis of data released by the U.S. Geological Survey by the Washington Post shows “rapid sprawl” in the South and West of the United States. Harris County, where Houston, Texas is located, saw an increase of 200 square miles of developed land over the past two decades. The implication for such growth, however, is an increased susceptibility to climate change, such as the drastic flooding the Houston area saw from Hurricane Harvey in 2017. Overall, the United States saw 14,000 square miles of new development since 2001.

VIRGINIA—Could Virginia Rail Express Serve as a Second Metro?
Wyatt Gordon, Virginia Mercury, August 13, 2021
With ridership on the Virginia Rail Express (VRE) commuter rail consistently down ninety percent, advocates and planners discuss how to retool the service for a more diverse ridership and attract transit-oriented development along the railway’s corridors. While VRE’s 2040 plan calls for greatly increased service levels, changes to land use planning in station areas is also required.

CALIFORNIA—COVID Has Gutted Public Transit in Los Angeles. Will Ridership Ever Bounce Back?
Nisha Venkat, KCRW, August 4, 2021
With a slow return in transit ridership, matched with a sharp increase in vehicle sales, a full recovery for Los Angeles’ transit system is in doubt. The Los Angeles County Metropolitan Transportation Authority (Metro) is in the process of retooling to better fit rider needs, such as drafting changes that would eliminate fares for students and low-income riders. Additionally, the agency is redesigning bus routes to prioritize efficiency.

JERSEY CITY—Court Throws Out Jersey City’s ‘Deeply Flawed’ Inclusionary Housing Ordinance
Chris Fry, Jersey Digs, August 13, 2021
A Hudson County judge recently nullified Jersey City’s 2020 Inclusionary Housing Ordinance, which called for 20 percent of all new units to be affordable, but allowed developers to “buyout” a certain allotment through a payment to the City’s affordable housing fund. According to the article, the vast majority of large-scale projects approved in Jersey City this past year have not included affordable housing, perhaps demonstrating the ordinance’s ineffectiveness.

JERSEY CITY—Jersey City Planning Board to Vote on Two Massive Towers Going in Journal Square and a Medical Marijuana Dispensary
Joshua Rosario, NJ.com, August 9, 2021
Two more large towers in Journal Square—27 and 28 stories respectively—will be voted on by the Jersey City Planning Board. The 27-story tower, from Delancey Development, would comprise 584 units, and the other, by 29 Cottage Owner LLC, would consist of 669 units. Both would be within a short walking distance of the Journal Square PATH station.

PATERSON—Paterson Train Station Parking Garage Project Plan Involves Borrowing Money
Joe Malinconico, NorthJersey.com, August 7, 2021
The Paterson Parking Authority will borrow $32 million from the Passaic County Improvement Authority (PCIA) for the construction of a parking garage adjacent to Paterson’s NJ TRANSIT station. According to City officials, a private developer will begin constructing a mixed-use 160-unit development adjacent to the site. Originally announced in 2019, the project has been stalled over financing difficulties.

CALIFORNIA—Transit Access to Jobs Surged With SFMTA’s May 2021 Muni Changes
Mass Transit, August 11, 2021
Data from the San Francisco Municipal Transportation Authority’s (Muni) Equity Toolkit shows how the agency’s focus on service equity neighborhoods has helped to increase employment access over the last six months. Service equity neighborhoods are designated based on a metric that takes into account the number of persons in poverty, rates of vehicle ownership, and race and ethnicity of the population. In January, 2021, Muni added the Bayview-Hunter’s Point Express bus service, which significantly expanded access for the neighborhood.

MASSACHUSETTS—New Tool Puts Racial Equity at the Center of Community Funding
Frances McMorris, NextCity, August 10, 2021
A new tool, developed by the Community Development Finance Institution (CDFI) BlueHub Capital, is designed to incorporate racial equity into the community development process. REAPP, or the Racial Equality Assessment that is Proactive and Practical, is a 20-minute survey that asks questions such as how the project will help to build BIPOC wealth and counteract displacement, among other considerations. It is being used for the Salem South River Revitalization Project, which is being supported by BlueHub Capital.

COLORADO—A Free Five Points Parking Lot Owned by RTD Will Go from Spots for Cars to Homes for People
David Sachs, Denverite, August 13, 2021
Denver’s Regional Transportation District (RTD) announced an intention to develop a parking lot next to its Five Points light rail station into a mixed-use development. The project will align with the agency’s equity goals by offering one quarter of the new units for sale below market price, for those making 80 percent of Area Median Income (AMI) in the Denver area. Offering the homes for sale, rather than for rent, was an innovative approach to help lower-income residents to build wealth, noted an official from the City’s housing department.

NORTH CAROLINA—Asheville Seeks $850,000 from Federal Government to Combine Housing, Transit Downtown
Joel Burgess, Asheville Citizen Times, August 11, 2021
The City of Asheville has applied for a federal “Areas of Persistent Poverty Grant” for a project that would create a mixed-use development with affordable housing and an expanded transit center. The “ART Place” project would be built on a parking lot purchased by the City earlier this year.

WASHINGTON—Sound Transit Enters into Agreement with City of Seattle for Temporary Tiny Home Village in U District
Sound Transit, August 10, 2021
The City of Seattle will lease, for no charge, a lot from Sound Transit, for the purpose of constructing a temporary tiny home village. Sound Transit purchased the lot for construction staging for the agency’s U District Station, and intends to eventually construct a transit-oriented development at the sight. Seattle may extend the lease for the 46-unit village for up to three years.

FRANCE—Yes, Other Places Do Housing Better, Case 3: Paris
Alan Durning, Sightline Institute, July 26, 2021
This in-depth case study examines housing policy in Paris to find possible solutions for smarter growth in the United States. The most effective move has been the Grand Paris initiative, which over the past two decades has combined zoning code reforms with massive transit investments. The addition of a new circular subway system has been complemented by 70,000 new homes planned or under construction in mile-wide neighborhoods around the stations.

May 21, 2005 Steph_Admin Comments Off on Somerset County Plans for TOD