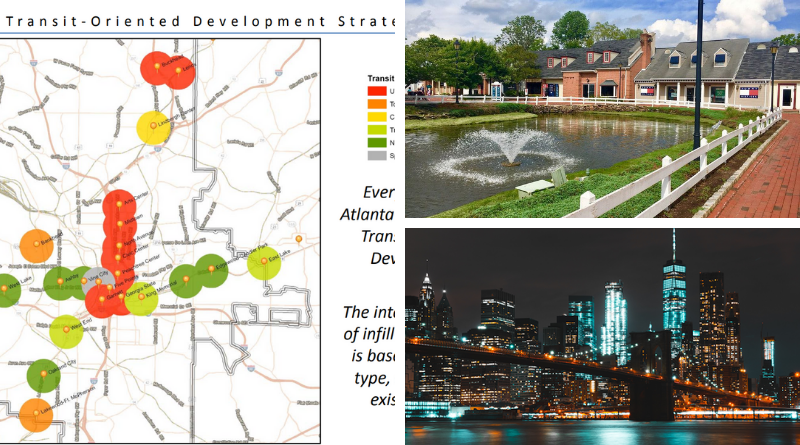 A new study from the Institute for Transportation and Development Policy, The Compact City Scenario–Electrified, finds that to reduce travel-induced greenhouse gas (GHG) emissions in urban areas by significant levels will require both full electrification of cars and more importantly expansion to public transit and development of “compact cities.” To reach 80 percent reductions in GHG over the next 30 years, these efforts will need to be made in order to get residents out of cars, and to walk, bike, and take transit to get to work, shop, or recreate. Electrification, coupled with efforts like the 15-minute city, offer promise and can be applied in locations where significant change is needed, such as Houston or Dallas, as well in those places already considered compact, such as Paris.

More Public Transit Can Mean More Access to Care
Emily Gee, Tradeoffs, December 17, 2021
The pandemic has once again demonstrated that even when health care services are available and free, barriers to access still confront many patients–particularly those in lower income households and who are members of racial/ethnic minorities. Researchers at the Urban Institute and the University of Minnesota examined the frequency of missed clinic appointments and looked at how improvements in public transportation can improve people’s access to care. They found that improvements to public transit may improve access to health care, especially for people with low incomes.

NYC Commutes Push N.J. Transit Riding to 55% of Pre-Covid Levels
Skylar Woodhouse, Bloomberg, December 9, 2021
Returns to offices are helping to fuel rising transit use on the NJ TRANSIT system. According to the transit provider, weekday ridership has grown in recent weeks to about 55 percent of pre-pandemic levels. Interstate bus ridership into New York City is nearing 65 percent and light rail ridership is at about 70 percent of pre-COVID levels.

ATLANTIC HIGHLANDS–Largest Ferry of its Type in U.S. Ready to Take to the Water between N.J. and NYC
Larry Higgs, NJ.com December 11, 2021
Monmouth County commuters traveling from Atlantic Highlands to New York City may now travel aboard the largest high-speed passenger catamaran operating in the United States, the Courageous. Ferry operator, SeaStreak, reports current commuter ridership at about 50-60 percent of 2019 levels (when they were at their highest. At present, there are about 2,400 one-way trips daily on Tuesdays to Thursdays and fewer trips on Mondays and Fridays.

EDGEWATER–Massive New Apartment Development Coming to Hudson River Waterfront
REW, Real Estate Weekly, December 13, 2021
Real estate developer, The Maxal Group, together with Envirofinance Group, has received planning board approval and will soon begin work on the redevelopment of the former Hess Oil Company site at 615 River Road in Edgewater. The 19-acre site on the Hudson River waterfront will result in three 25-story towers comprising 1,200 apartments (of which 180 will be affordable units), 20,000 sq. ft. of retail space, a two-acre park, and a waterfront walkway connecting to the existing river walk and to ferry service.

NEWARK–New ‘CitiSquare’ Proposal Calls for 11 High-Rises Where Newark Ballpark Previously Stood
Jared Kofsky, Jersey Digs, December 13, 2021
May Newark Urban Renewal LCC has submitted plans to the Newark Center Planning Board for CitiSquare, the redevelopment of the former Riverfront Stadium in Newark. This represents a renewed effort to remake the property, which is located near the Newark Broad Street Station and NJ TRANSIT Newark light rail line. Proposals to redevelop the site first emerged six years ago. Current plans call for a total of 4,200 residential units, 100,000 sq. ft. of commercial and amenity space, and nearly 2,000 parking spaces, all to be implemented over a nine-phase development project. The proposal specifies that 5 percent of the housing units would be affordable; however, the Newark City Inclusionary Zoning Ordinance requires 20 percent.

FLEMINGTON–Nation’s First Outlet Shopping Center Will Be Turned into a Housing Complex in Rural N.J. Town
Vashti Harris, NJ Advance Media for NJ.com, December 17, 2021
On Monday night, the Flemington Borough Council adopted an ordinance establishing the “Liberty Village Redevelopment Plan.” The plan calls for the redevelopment of the Borough’s notable outlet mall into a residential community comprised of multifamily and townhouse units. The westernmost parking area in the 23-acre site serves commuters on the Trans-Bridge Line, which provides bus service to New York City. The Liberty Village shopping center opened in 1981 as the nation’s first outlet center.

Marginalized Communities Shoulder the Heaviest Energy Burdens. Cities Can Lead the Way to Energy Equity
Stefen Samarripas, The Hill, December 17, 2021
This opinion piece explores how people with lower incomes, older adults, and communities of color bear the heaviest burdens from energy costs. A quarter of American households struggle with high energy burdens, spending more than six percent of their income on electricity and heat. Lower income households also spend a greater percentage of their income on transportation fuel costs—about 14 percent. Though some U.S. cities are working to address this situation through “energy equity” programs and low-carbon and equity-driven transportation initiatives (such as bikes, transit, electric vehicles), considerable work remains to address the needs of the nation’s most energy-burdened households.

WASHINGTON–Seattle’s Regional Transit System Adopts Plans for More Equitable Service
Jason Plautz, SmartCitiesDive, December 16, 2021
King County Council unanimously approved long range plans for the King County Metro that will expand transit services to historically underrepresented communities. Recommendations released in 2019 by the “Equity Cabinet”—a group of 23 community leaders representing communities and riders countywide including, but not limited to, low- and no-income people, black, indigenous, and people of color, immigrants and refugees, people with disabilities, and limited-English speaking communities—call for a focus on areas of unmet need, as well as on safety, incentives for transit-oriented development and improved community engagement.

CALIFORNIA—State Housing Officials Caution San Francisco Supervisors about Rejecting Housing Development
Sarah Downey, Northern California Record, December 14, 2021
The California Housing Accountability Unit (HAU) has directed the San Francisco Board of Supervisors to revisit their decision to reject plans for a housing development on a disused parking lot. The 469 Stevenson St. Development would comprise 495 units and be located one block from the Market St. & Taylor St. light rail station. The HAU operates within the California Department of Housing and Community Development (HCD) and was created to help jurisdictions comply with all aspects of state housing law.

NEW YORK—The Perks (and Costs) of Living in LI’s New Downtown Complexes
Jim Merritt, Special to Newsday, December 15, 2021
According to Eric Alexander, President of Vision Long Island, between 2001 and 2006, only 400 rentable apartments were built on Long Island. But over the past 15 years, about 15,000 units of transit-oriented development have been constructed. These units can be found near several stations in both Nassau and Suffolk counties and appeal not only to those who commute to work, but those who only travel for pleasure. Edward Eder, who frequently travels to Madison Square Garden to see the Knicks play and who lives in an apartment located steps away from the Farmingdale LIRR Station, said, “One of the misconceptions is that everyone who lives in these types of buildings is commuting to work in New York City.”

GEORGIA—City Initiated Bankhead MARTA Station Rezoning’s Advance TOD Goals
Anita Archambeau, What Now Atlanta, December 10, 2021
Two recent actions, a proposed ordinance to rezone properties near the Bankhead MARTA Station, and a proposed amendment to the Comprehensive Development Plan, are designed to encourage additional transit-oriented development and affordable housing near the station. The rezoning ordinance calls for a mixed residential commercial zone to replace the current industrial, mixed residential/commercial, and single-family residential zone. Both actions are in alignment with the Atlanta Transit-Oriented Development Strategy, and its goal of adding 25,000 residential dwelling units within a half mile of a transit facility by 2025. 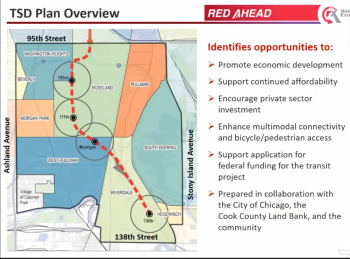 ILLINOIS—How can we create “transit-supportive housing” near new Red Line extension stations?
James Porter, Streetsblog Chicago, December 10, 2021
With the passage of the $1.2 trillion federal infrastructure bill, Illinois stands to receive $17 billion for transit improvements. CTA plans to use some of those resources to extend the Red Line south to the city limits. The agency is looking for feedback on strategies and concepts for “transit-supportive” development – defined by the FTA as dense, mixed-use development near stations that encourages ridership, reduces urban sprawl and traffic congestion, encourages walking, and fosters economic activity and sustainability.

What Do Residential Lotteries Show Us About Transportation Choices? Actually, Quite a Lot.
Adam Millard-Ball, Jeremy West, Nazanin Rezaei, and Garima Desai, Transfers Magazine, December 2021
Do people walk and take transit more in transit-rich locations because people who like to walk choose to live there or do the characteristics of a place—the built environment—influence how people travel? This question has been the topic of a vast body of research. Looking at the San Francisco housing lottery, which randomly assigns a broad variety of people to units and neighborhoods throughout the city, researchers at UCLA, UC Santa Cruz, and Oxford University concluded that the built environment does indeed affect both car ownership and travel behavior and suggest that cities that want to encourage transit usage and walking should consider reductions in residential parking and plan for alternatives to private cars.

INDIA—India, Germany Development Bank Sign 442.26 MN Loan Pact for Surat Metro Rail Project
PTE, The Economic Times, December 17, 2021
Plans for the Surat Metro Rail projects have been advanced with a signed agreement between the Government of India and the Germany Development Bank (KfW) for a 44.2.26M € loan. The total cost of the projects is 1.5B €, part of which will be supported with a 250M € loan from the French Development Agency (AFD). The Surat Metro project will comprise two corridors for a total length of 40.35 km and is expected to be completed in December 2023. Phase 1 will result in 20 metro stations along a corridor from Sarthana, Gujarat’s second largest city, to DREAM (Diamond Research and Mercantile) City, an office and residential district.

NEW ZEALAND—Sweeping Townhouse Bill Passes into Law with Support of Labour and National, Will Force Councils to Allow More Homes
Henry Cooke, Stuff, December 14, 2021
With the passage of the Resource Management (Enabling Housing Supply and Other Matters) Amendment Bill, New Zealand has eliminated single family zoning, parking requirements, and minimum lot sizes in “tier 1” cities — which include Auckland, Wellington, Christchurch, Tauranga, and Hamilton. Starting in August 2022, councils in these cities will have to allow the construction of three-story structures at all locations and six-story structures near major transit and job centers so long as said structures meet building standards. An analysis by PwC suggests that this change may result in up to 105,000 new dwellings. The bill also brings forward the timeline for the National Policy Statement on Urban Development (NPS-UD) by a year, which bans councils from setting height limits of less than six stories in certain urban areas. The bipartisan measure passed parliament by a vote of 110 to 10.