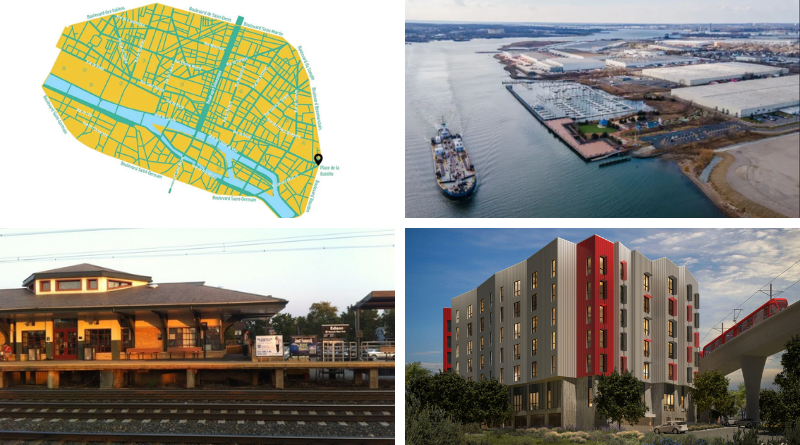 What Impact Has the Pandemic Had on Mass Transit?
Laurie Winkless, Forbes, February 15, 2022

Global public transport systems are facing an unprecedented drop in ridership, bearing the brunt of the economic and social impacts of COVID-19. The pandemic has exacerbated existing transportation inequities, from furloughs for transportation workers to service disruptions that have a major impact on the lives of low-income and marginalized people. In New York alone, subway ridership has dropped by more than 80 percent. The COVID-19 pandemic highlights the need for equitable and sustainable measures such as increased funding for bicycle and pedestrian infrastructure and the need to limit car dependency.

CALIFORNIA—LA Metro Cuts Service to Cope with Covid-Driven Driver Shortage
Sarah McGregor, Bloomberg | Quint, February 18, 2022
A shortage of drivers is forcing Los Angeles’ public transit operator to temporarily cut bus and train service by about 12 percent. Although ridership is yet to reach pre-pandemic levels, MTA-LA County is working to find 500 new bus drivers and has offered $3,000 signing bonuses to meet the rising demand. The reduced schedule will start Sunday and last through at least June 26.

Covid-Era Americans Are Using Public Transit Less and Having More Car Crashes
Oliver Milman, The Guardian, February 4, 2022
While mass transit ridership has plummeted sharply and is toiling to recover, a spike in auto-related deaths has alarmed transport officials. As traffic fatalities have reached an average of 3,000 per month, Pete Buttigieg, the U.S. transportation secretary, has called the situation a “national emergency.” This while mass transit ridership remains half of what it was prior to the pandemic. Tara Goddard, an expert in transportation safety discusses the reasons for the trend and believes the $109 billion in funding through the bi-partisan bill is a sign of hope to build a more resilient public transit system.

EDISON/METUCHEN—Edison and Metuchen Receive Combined $1.25 Million in Safe Streets to Transit Program Grants
Staff, tapinto.net, February 16, 2022
Governor Phil Murphy and the New Jersey Department of Transportation (NJDOT) awarded Edison and Metuchen a total of $1.25 million in grants under the Safe Streets to Transit Program (SSTT) to improve accessibility and pedestrian safety. The SSTT program focuses on improving pedestrian conditions within a 1-mile radius of train stations to encourage pedestrians to walk. Edison received a $675,000 grant to promote projects around Edison Station, while Metuchen received $575,000 to improve safety on Pearl Street and New Street.

CARTERET—NJ Ferry Service to Manhattan Gets $6M Boost from Feds
Susan Loyer, My Central Jersey, February 16, 2022
The federal Department of Transportation has awarded $6 million to the Borough of Carteret to build a ferry terminal to extend service to downtown Manhattan. In January, Port Imperial Ferry Corp., aka NY Waterway, won the public bid to provide the Borough with a 149-passenger ferry. A $1 million grant from NJ TRANSIT and a $1.25 million grant from the Port Authority Capital Fund will support the purchase. The ferry will include an ADA-friendly bathroom, two decks and bench-style seating.

PLAINFIELD—New Five-Story Apartment Building Approved in Plainfield
Amie Johnstone, Jersey Digs, February 14, 2022
The Plainfield Planning Board approved a proposal for a new apartment building at 107 West 6th Street in the Redevelopment Area of the Transit Oriented Downtown Development zone (TODD). The five-story structure will comprise 71 residential units and offer covered parking on the ground floor and amenities, including first-floor bicycle storage. The site is located a quarter-mile from the Plainfield Station and is currently vacant land.

SUMMIT—‘Creation of a Neighborhood’: Public Briefed at Broad Street West Community Presentation
Karen Ann Kurlander, tapinto.net, February 14, 2022
Interest in proposed development for Subdistrict 3 of the Broad Street West redevelopment remains high as evidenced by the nearly 100 residents who attended a public meeting on February 9th. The presentation, led by Topology, the City’s planning firm, described the site, a triangle bounded by Morris Ave, Broad St, and Cedar St, which is located about one-third mile from the Summit Station. Current plans call for a single building comprising 140 rentals (112 market rate, 21 affordable, and 7 “workforce”) as well as 196 parking spaces. It would replace a parking lot, existing fire house, and an office building. The project would entail purchase of the City-owned land for $8 million, 30-year PILOT (payments in lieu of taxes), and a $1.75 million redevelopment area bond to fund public improvements.

PENNSYLVANIA—Philly Startup Awarded $450K to ‘Change the Face’ of Real Estate Development
Aaron Moselle, WHYY, February 16, 2022
The Growth Collective, a startup striving for equitable real estate development, received $450,000 in grant funding from a pair of foundations. The collective supports Black-owned and operated development firms through advocacy and by raising capital. In response to the development boom fueling inequality in Philadelphia, the collective’s aim is to support Black developers and thereby build wealth in communities of color.

NEW YORK—A ‘Fair Fares’ Program So Exclusive, Barely Anyone Can Qualify For It
Ana Ley, The New York TImes, February 15, 2022
New York City’s Fair Fares program provides 260,000 low-income New Yorkers half-price transit rides. Elected officials, advocates, and transit leaders have been calling on the new mayor, Eric Adams, to double the program’s funding from $53 million to $106 million. Expansion of the program will increase accessibility and affordability of public transportation for the many low-income residents still in need of assistance, they argue. However, the mayor has only agreed to increase funding to $75 million.

CALIFORNIA—SANDAG’s New Equitable Housing Committee Plans Homes, Transit
Jessica Webb, The Star News, February 11, 2022
The San Diego Association of Governments (SANDAG) has formed a new Regional Fair Housing Subcommittee to identify unique housing solutions to meet the needs of diverse communities across the region. The subcommittee facilitates coordination between representatives of local governments and SANDAG, the regional planning agency, to address housing shortages. Additionally, the Regional Housing Needs Assessment (RHNA) plan adopted by SANDAG is expected to receive a second round of funding worth $43 million to meet its goal of building 171,000 housing units by 2029.

MASSACHUSETTS—Baker-Polito Administration Highlights Nearly $9 Million in Three MassWorks Awards
Staff, Charlestown Patriot-Bridge, February 16, 2022
MassWorks Infrastructure awarded $1.5 million to Boston for a major transit-oriented development on the site of the Blair Parking Lot in Roxbury. The TOD project, Nubian Square Ascends, will create a space for cultural, entertainment, and artistic uses. It will comprise a new public way and plaza with multi-modal accommodations, 135,000 sq. ft. of commercial space and a 300-space parking garage.

INDIANA—Indianapolis Looks to Mass Transit Project to Spur Development in Low-Income Area
Deon J.Hampton, NBCNews, February 14, 2022
Indianapolis Public Transit Corporation’s $188 million new bus rapid transit (BRT) system will connect downtown to the neighboring City of Lawrence and aims to support community revitalization and economic development along an eight-mile stretch of East 38th Street. The 15-mile Purple Line will serve about 58,000 residents, 60 percent of whom are minorities and 30 percent are low-income.

FRANCE—Parisian Car Ban Planned for 2024
Jon Porter, The Verge, February 18, 2022
Paris, the French capital, has announced a ban on private cars from entering the historic city center by 2024. These car-free areas are known as the “Tranquil Zone” and include the City’s four arrondissements and the two islands on the Seine. However, this is not a complete ban on all private cars, but rather the traffic that accounts for more than half of the vehicles in the area. The ban is an attempt to reduce pollution ahead of hosting the 2024 Olympic Game.

VIETNAM—Ho Chi Minh City Speeds Up Adjustment of Development Master Plan
Vietnam News Agency, vietnamplus.vn, February 13, 2022
The People’s Committee of Ho Chi Minh City approved a new master plan that aims to meet the City’s development requirements. As the country’s economic and technological hub, the City is expected to grow to 13-14 million people by 2040 and to 16 million by 2060. The plan for the urbanization of 100,000-110,000 hectares of land by 2040 is set to integrate urban development with transit-oriented development (TOD). A part of the master plan includes an underground public transport system linking the city with neighboring provinces.

INDONESIA—JICA to Offer $2.1bn Loan for Metro Manila Subway Project
Railway-technology.com, February 11, 2022
The Philippine government and the Japan International Cooperation Agency (JICA) have decided on the second phase of funding to support the first phase of the Metro Manila subway project in the Philippines. Under the agreement, Japan will allocate up to $2.1 billion in loans as additional official development assistance (ODA). In their first stage of funding release in March 2018, JICA provided an ODA of $985 million. The Metro Manila Subway Project will comprise 15 stations along the 27km underground railway line. It will connect Valenzuela City in the northern part of Metro Manila with Pasay City in the southern part, and is the first subway in the Philippines.