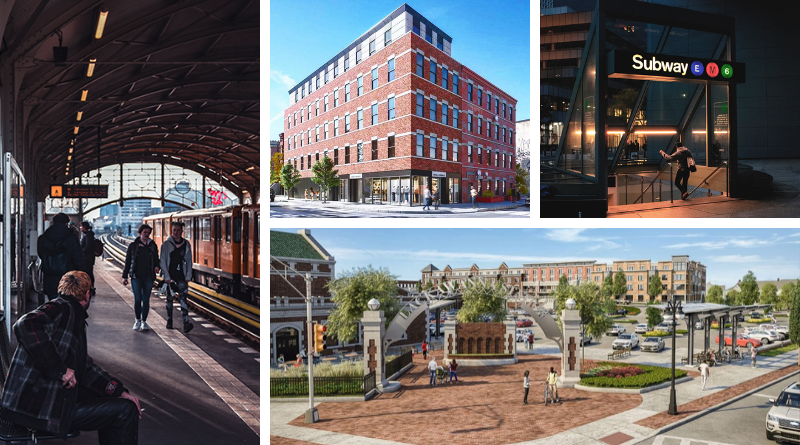 Rendering Revealed for 306 Johnston Avenue in Jersey City
Chris Fry, Jersey Digs, January 10, 2020
A five-story multi-use building will soon break ground on a vacant lot on the corner of Monitor Street and Johnston Avenue in Jersey City. According to plans submitted by AM Development, the first floor will feature 760 square feet of retail, and the rest of the building will house eight residential units –one of which will be designated as affordable housing – and a rooftop amenity space. Developers chose not to include parking, complying with the district’s existing TOD zoning.

CapMetro Announces New Transportation Plan, including Potential Underground Transit System
Paul Livengood and Hank Cavagnaro, KVUE ABC, January 14, 2020
On Tuesday, Capital Metro and the City of Austin introduced Project Connect, a proposal and transportation plan to expand MetroRail options and construct an underground light rail system in Downtown Austin. Before the project’s proposed kick-off in 2021, the City of Austin and CapMetro first need to demonstrate long-term, local commitment before they can qualify for federal funding. The required commitments include vehicle emissions taxes, the evaluation of new funding sources and other value capture opportunities, as well as voters’ approval of these transportation initiatives on the 2020 ballot.

Coachella’s ‘Urban Concept’: Transit Station, Subsidized Housing
City News Service, Patch.com, January 14, 2020
The Coachella Planning Commission is moving forward on a proposal for a mixed-use development in downtown Coachella, bringing in a transit station, commercial spaces, and 105 subsidized affordable apartments. The number of households in Coachella more than doubled between 2000 and 2018, and the city is eager to make way for future growth. The city council previously rezoned a portion of the project site to accommodate the new development, and plans are currently in the final stages of the review process. According to Mayor Steven Hernandez, “developing the city’s walkable downtown corridor with dense housing at all income brackets is a must” for promoting urban development in the previously undeveloped areas of Coachella Valley.

CHINA — Nation to Build Over 4,000 km of New Rail Lines
Wang Keju, China Daily, January 3, 2020
On Thursday, Luy Dongfu, the general manger of China State Railway Group announced plans to build at least 4,000km of new railway lines in 2020 including 2,000 km of high-speed railway lines. The Ministry of Transport estimates expenses of at least $386B on transportation infrastructure projects, with roughly $116B allocated for railways. According to Zhang Xiaodong, Beijing Jiaotong University’s railway transportation economics expert, “Since the opening of China’s first high-speed railway [in 2008], the country has constructed more high-speed rail lines than Japan and Europe did in 40 years.”

GERMANY — Germany Goes Greener With $95 Billion Push for Train Over Plane
Arne Delfs and Brian Parkin, Bloomberg, January 14, 2020
Germany launched a $95 billion, 10-year initiative to upgrade rails, bridges, and carriages, extend rail lines, and electrify routes to jumpstart the country’s “decade of the rail,” according to Transportation Minister Andreas Scheuer. The government hopes to bolster Germany’s infrastructure and reduce the country’s carbon emissions from transportation and power generation. The buildout and improvements to Germany’s railway is intended to reduce the use of cars and planes in the country.

INDIA — Pune: Transit-Oriented Development Policy to be Implemented Before Impact Assessment
Express News Service, Indian Express, January 15, 2020
Since the state government’s approval of a TOD policy last March, the Pune Municipal Corporation (PMC) began granting permissions for the construction of mixed-use, high-density buildings within 500 meters of mass transit stations. According to Yuvraj Deshmukh, the superintendent engineer of the PMC, Urban Mass Transport Company Ltd. was recently commissioned to conduct an analysis of existing conditions and possible post-TOD buildout scenarios, such as building use, population density, and employment. There are currently 63 transit stations in the Pune metro area targeted to accommodate TOD.