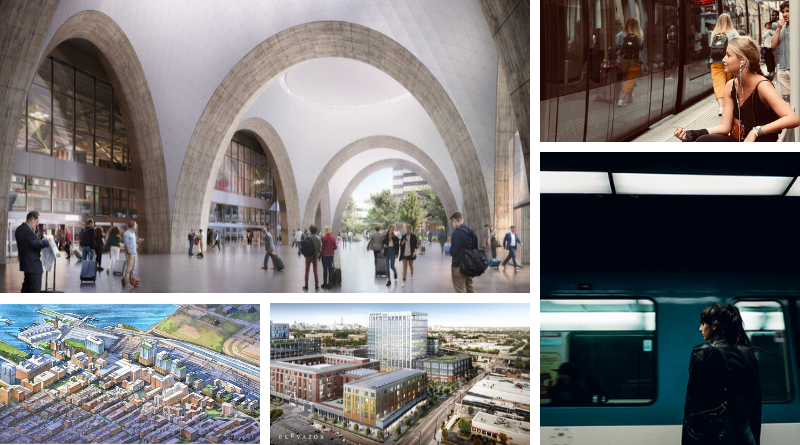 Connect 2020: Collingswood, Haddon Twp. Solicit Input for Master Bike, Pedestrian Plan
Matt Skoufalos, NJ Pen, January 21, 2020
Utilizing a 2018 grant from the Delaware Valley Regional Planning Commission (DVRPC), the Camden County communities of Collingswood Borough and Haddon Township are moving forward with developing a joint master plan pedestrian and bicycle plan. Over the past two years, planners have been gathering data for “Connect 2020” and have recently stepped up their engagement efforts, showcasing the Connect 2020 map last spring and gathering comments via an online survey and interactive map. Community members have called for improvements that allow for better active transportation within and between the two communities. Both communities are home to PATCO stations and Collingswood is a designated New Jersey Transit Village.

Hoboken Redevelopment Plan to Be Reintroduced Wednesday Without Residential Units
Terri West, The Jersey Journal, January 21, 2020
Changes to plans for high-rise buildings near the Hoboken Station now call for only commercial development after community members questioned the inclusion of residential uses in the plans shared last year. Additionally, the revised plan calls for reducing overall building height from 300 feet to something between 200 and 300 feet for the area known as Site 1. The latest plans amend those adopted in 2014. The Hoboken City Council plans to reintroduce the amended plan during a special meeting Wednesday, January 22 and hold a vote at its regular meeting two weeks later.

Change Is Coming to Rent Control in N.J.’S 2nd Largest City. Here’s How It Could Affect You
Patrick Villanova & Joshua Rosario, The Jersey Journal, January 24, 2020
A council committee in Jersey City has recently released a 43-page draft ordinance that, if approved, would update the city’s rent control regulations. The proposal would increase the number of buildings governed by rent control, change how landlords can raise rental fees following capital improvements, and require landlords to provide tenants with written notice when their apartments are rent-controlled. The current rent control ordinance only applies to buildings with five or more units built before 1987 and allows landlords to increase rent on vacant units by $1.35 for every $100 spent on a renovation or other improvements (or $1.55 for every $100 spent if improvements exceed $5,000). The proposed ordinance would expand rent control to newer buildings with 50 units of housing and cap rent increases at $1.15 per $100 of all capital improvements.

Linden Building Vacant for Half-Century to Be Replaced
Alyssa Lidman, Union News Daily, January 25, 2020
The Linden Planning Board recently approved a mixed-use residential and commercial redevelopment project on the site of the abandoned United Lacquer warehouse on West Elizabeth Avenue. When completed, the project will offer 402 apartments and space for a restaurant, and will include a two-level parking garage for 530 cars and feature 4 to 6 electric-vehicle charging stations. The property is located adjacent to the tracks of the Amtrak/NJ Transit Northeast Corridor rail line, about a half-mile southwest of the Linden Station. Linden designated the property “in need of redevelopment” three and half years ago.

More Transit-Oriented Parking Is Coming to South Station
Christian MilNeil, Streetsblog Massachusetts, January 15, 2020
Despite recommendations from the Metropolitan Area Planning Council (MAPC), MassDOT and the Boston Planning and Development Authority approved a 51-story development between the South Station terminal and commuter rail platforms. The project will include residential spaces and a multi-level parking garage to accommodate 527 spaces. The projected additional vehicular traffic is expected to add more air pollution to the already gridlocked neighborhood. The state has set up a website to provide commuters with construction updates.

Brooklyn Park Council Starts Year with Land-Use Decisions
Kevin Miller, Sun Post, January 18, 2020
In Brooklyn Park, Minnesota, the city council approved amendments to the zoning code to allow drive-thrus as a conditional use in one type of transit-oriented development district, specifically in some areas affected by the Bottineau Blue Line Light Rail extension. As five additional stations await build-out in Brooklyn Park, the city plans to make station areas accessible to pedestrians and cyclists but also seeks flexibility to encourage investment. The zoning change followed a request by building owners who want to broaden the appeal of a site slated for redevelopment.

Making Public Transit Fairer to Women Demands Way More Data
Flavie Halais, Wired.com, January 21, 2020
Though transit agencies have been trying to provide better services for female and mobility-challenged commuters, the data needed to understand opportunities for improvement is still largely unavailable or expensive to obtain. Institute for Transportation and Development Policy (ITDP) spokesperson Jemilah Magnusson characterizes the issue, saying that “most transport systems were explicitly designed for the solo male commuter.” Several systems have been working to address this deficit. Transport for London has been collecting information on the travel patterns of women and other groups of riders for a number of years and annually releases a summary of its data. Since 2019, Los Angeles Metro has collected and analyzed gender-disaggregated data, results of which were released in a report this past September.

Ald. Ramirez-Rosa Discusses The 606 Development Freeze, Logan TOD Funding
John Greenfield, Streetsblog Chicago, January 21, 2020
Sustainable transportation issues saw a legislative win at a recent Chicago City Council meeting. The Council approved a six-month development moratorium along The 606 elevated trail to fight housing displacement and gentrification. At issue are rising home prices in the area. A recent study by Institute for Housing Studies at DePaul University found a 344 percent increase since 2012 in property prices of buildings with one-to-four units in areas along The 606 (aka the Bloomingdale Line), an elevated urban park that opened in 2015. The moratorium would halt demolition, construction, and zoning changes to provide more time to study anti-displacement strategies in the area. The City Council also approved bond financing for an all-affordable 100-unit TOD by the Logan Square Blue Line Station. Projected construction cost of the project is about $31 million.

Vision Unveiled for West End Mall’s Rebirth as Mixed-Use ‘Opportunity Zone’
Josh Green, CurbedAtlanta, January 21, 2020
On Tuesday, Elevator City Partners (ECP) released renderings of the proposed West End Mall redevelopment plan that showed a $400M hub of offices, hotel rooms, and affordable housing. The district belongs to a federal “opportunity zone” just a block away from a MARTA Station. The redevelopment plan includes retail, residential, cultural, office, and public green spaces, though developers and planners have yet to determine a timeline. ECP is allocating $15M for economic development to alleviate the displacement of current residents and to support local, minority-owned businesses.

UNITED KINGDOM — New UK Housing ‘Dominated by Roads’
Roger Harrabin, BBC News, January 21, 2020
A report from University College London (UCL) shows that many development projects in the UK still focus on building roads and highways that “do not fully account for pedestrians and cyclists.” According to Professor Matthew Carmona, the author of the report, nearly 75 percent of 142 developments surveyed did not contribute to a sense of place for local residents nor were they designed to accommodate cyclists and pedestrians. The UK Government announced that, in light of the country’s 2050 climate commitments, plans to update design standards for roads are underway.

CANADA — Public Transit Use Up in Montreal Area, Particularly among Young People, Report Says
CBC News, January 21, 2020
According to a report by the Montreal regional transport authority, transit ridership increased in the region by 4 percent between 2013 and 2018 with nearly 417,000 new riders using the system during the period. Car travel decreased by 1 percent, with the number of cars on the road during rush hour decreasing by 15,000 from 2013 to 2018. The Montreal Metropolitan Community’s (CMM) 2031 ridership target is for 35 percent of morning rush hour commutes to be on public transit. Benoit Gendron, the General Director of Autorité régionale de transport métropolitan (ARTM), is confident about the outcome of future transportation projects such as the Réseau express métropolitain (REM) light rail project, citing a recent pattern of rising ridership with each increase in capacity.