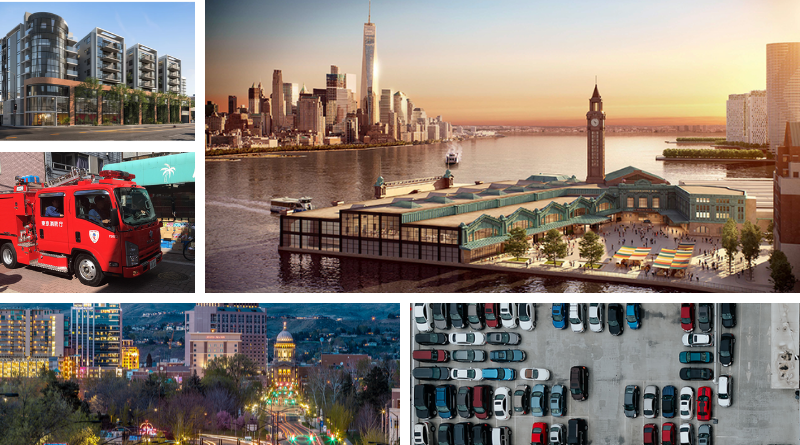 Hoboken Yard Development Vote Postponed, May Cut Residential Part
Caren Lissner, Patch.com, January 22, 2020
On February 5th, Hoboken City Council members will vote on a revised proposal for the Hoboken Yards that eliminates residential units from the original plan and replaces them with office spaces. According to 1st Ward Councilman Michael DeFusco, the amendment to remove the residential development “eliminated the potential burdens” on the Hoboken school system and would “further diversify” the city’s tax base. The revision will include a pickup and drop-off area for taxis, buses, and ride-sharing vehicles.

Jersey City Officials Move to Adopt Parking Tax Targeting Out-of-Towners
David Cruz, NJTV News, January 27, 2020
Earlier this month, Governor Phil Murphy signed a measure allowing New Jersey municipalities to impose a 3.5% tax on fees collected at commercial parking lots. Municipalities must have at least 100,000 residents to qualify. Jersey City, Newark, Paterson, Woodbridge, Elizabeth, and Edison qualify under the law but are not required to collect the tax. Revenues raised may be used for transportation projects and initiatives to enhance pedestrian access to mass transit, such as bridges, platforms, walkways, and escalators. If the tax is implemented, residents will be eligible for discounts but will have to pay up front and then apply to the city for a refund. Jersey City councilmembers are considering the distribution of special resident-only decals for car windows.

Who’s to blame for high housing costs? It’s more complicated than you think.
Jenny Schuetz, Brookings, January 17, 2020
Brookings Fellow Jenny Schuetz, (Metropolitan Policy Program, Future of the Middle Class Initiative) outlines the two schools of thought on the high costs of housing – overly restrictive land use regulations and corruption among real estate developers – and explores the complicated web of players, financial relationships, processes, and constraints that, when successful, result in the production of housing in the U.S. Her synopsis provides insight on why projects, including mixed-use, transit-oriented development projects, can be so difficult to implement.

In the Historic Triangle, an Adequate Public Transportation System Supports Quality of Life
SaraRose Martin, Virginia Gazette, January 24, 2020
With 12 fixed routes and more than 300 bus stops, the Williamsburg Area Transit Authority (WATA) fleet and network serves students, low-income commuters, and paratransit riders across three Virginia localities: Williamsburg County; York County; and James City County. Despite a national decline in transit ridership, the WATA system provided more than 56,000 rides during the lowest ridership month in 2019. WATA continues to receive public support and federal funding to improve its services. Andrew Trivette, Williamsburg City Manager, said “WATA does a fantastic job at providing a great product… It is a really well-run transit system but we need to constantly be looking toward what the future of transit is so it can remain relevant.”

Measure G in Redlands is a big deal. Here’s why
Jennifer Iyer, Redlands Daily Facts, January 26, 2020
Since 2018, Councilwoman Denise Davis has been promoting smart growth and transit-oriented development for the City of Redlands, California. On March 3, 2020, the city will be calling a vote on Measure G, a ballot measure proposing relaxed restrictions on downtown development around the city’s transit corridor. If passed, Measure G will promote transit-oriented development and walkable communities near stations on the Redlands Passenger Rail Line, the city’s new railway that is scheduled for completion in 2022.

More buses. Lots more apartments. State Street’s future may finally be coming into view
Kate Talerico, Idaho Statesman, January 26, 2020
Redevelopment plans for State Street in the West Valley neighborhood of Boise, Idaho are underway, with the aim of bringing higher-density development and a bus rapid-transit system to one of the most widely-traveled streets in Boise City. The four areas identified for development are Whitewater Park Boulevard, Collister Drive, Glenwood Street, and Horseshoe Bend Road. Proposed improvements include more crosswalks and sidewalks, and the build out of multi-use residential and commercial buildings. In 2019, the City of Boise began to update its zoning code to accommodate these changes. According to planning consultants, this process could take more than a year.

Top 25 Finalists for 2020 Ivory Prize for Housing Affordability Announced
GlobeNewswire (PR), MarketsInsider, January 27, 2020
Ivory Innovations announced the top 25 finalists for its 2020 Ivory Prize for Housing Affordability. Now in its second year, the Ivory Prize recognizes innovators seeking to make housing more affordable in the areas of finance, construction and design, and public policy and regulatory reform. Recipients of the prize advance ambitious, feasible, and scalable solutions to housing affordability. Among the finalists is Small Change, a real estate crowdfunding platform based in Pittsburgh through which individuals can invest in affordable housing, community-centric, and transit-oriented projects.

“Snow plows come in only one size: ginormous.” Or do they?
Charles Marohn, Strong Towns, January 29, 2020
Founder and President of Strong Towns, Charles Marohn, explores “right-sizing” streets and the use of street grids to promote safety and investment. The need to accommodate fire trucks, snow plows, and other service vehicles has been cited as a reason for wider streets and against higher density redevelopment. Marohn counters these arguments and considers right-sizing emergency vehicles to travel on narrower, safer streets.

PHILIPPINES — Residents of Parañaque Can Now Ride a P2P to Makati
Leandre Grecia, Top Gear Philippines, January 27, 2020
The Phillipines Department of Transportation (DOTr) began operations on a new point-to-point (P2P) bus route between the Makati Central Business District and Parañaque residential subdivision, BF Homes. Fares are set at P100 (roughly US $2.00) but senior citizens, persons with disabilities (PWD), and students are eligible for discounted rates at P80 (roughly US $1.50). The service is expected to reduce travel times and provide a comfortable one-seat ride for commuters. In a press conference on Monday, DOTr Assistant Secretary for Road Transport and Infrastructure Mark Steven Pastor said that public transportation in Metro Manila serves as a “social equalizer” for Filipinos, and that the DOTr aims to make these services available and affordable for all, regardless of social status.