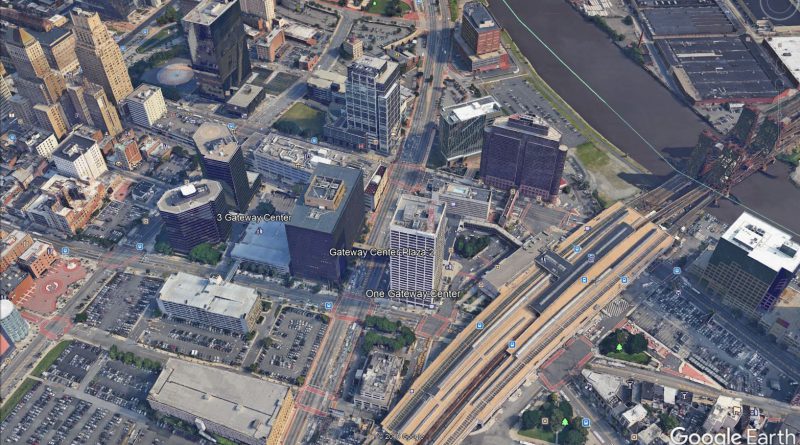 Middlesex County: Funding Earmarked for Various Projects
Susan Loyer, Bridgewater Courier News, January 7, 2019
The FY 2019 State of New Jersey budget has allocated $8 million to the 19th legislative district for five infrastructure projects in Middlesex County. The projects include improvements to a historic site in Perth Amboy, an athletic field in Woodbridge, and to water supply protection in Sayreville, and construction of a performing arts building in Carteret. The budget also includes funds for the final engineering design of the Radford Ferry Terminal in South Amboy, which will provide a direct ferry route from the city to Manhattan.

Renderings Show a Supermarket is Planned for Jersey City Heights Development
Jared Kofsky, Jersey Digs, January 8, 2019
More details have been released about the project located at 345 Central Avenue in the Jersey City Heights neighborhood. The Zoning Board of Adjustment approved the project in December. Jorge Mastropietro Architects Atelier (JMA) is the architect for the building, which will include a supermarket on the ground floor and 27 residential units above. JMA has not included any parking in the design but spaces will be provided for bicycles.

Freehold Borough Retains Firm to Pursue Transit Village Designation
Matthew Sockol, CentralJersey.com, January 8, 2019
The Borough of Freehold has hired Group Melvin Design for planning services to assist with obtaining Transit Village designation from the NJ Department of Transportation. The transit village would center on the bus station located off Broad and Throckmorton Streets. The municipality has been pursuing Transit Village status since 2015 when it received an NJTPA grant to assist in defining downtown redevelopment strategies, and solicited community input on TOD options.

Facelift for West Main Street Property
RahwayRising.com, January 9, 2019
Following a discussion by the Redevelopment Agency in May 2018 concerning the many vacant buildings along West Main Street, renovations have begun to the exterior of a property located a five-minute walk from Rahway Junction. It is not yet known how the owner plans to repurpose the building which sits across the street from 1 Park Square, a residential rental building.

Adaptive Reuse Projects Spur Growth in New Jersey Office Market
David Cohen, ReBusiness Online, January 9, 2019
New Jersey is experiencing growing demand for office space. The availability rate of office space is at a nine-year low amid low unemployment rates, successful business retention efforts, and the redevelopment of office properties that removes them from inventory. Several major leases and planned new construction projects have occurred over the past year. In Newark, a property at 110 Edison Place is being repurposed as a 450,000 square foot office and retail building. Mars Wrigley, a confectionary company, will be the anchor tenant, bringing 113 jobs from Chicago and 370 jobs from Hackettstown, New Jersey.

Joint Venture Acquires Gateway 1, 2 and 4 in Newark, Plans Concourse Transformation
Joshua Burd, Real Estate NJ, January 10, 2019
A joint venture of four investment companies has purchased One, Two, and Four Gateway Center in Newark, with plans to modernize the complex which sits across the street from Newark-Penn Station. Over 60,000 people travel through the complex on a weekly basis. The new owners plan to market the property to retailers and corporate office users as “one of the best transit-oriented office portfolios in the Northeast.”

175+ Units Planned Near Bloomfield’s Watsessing Avenue Station
Jared Kofsky, Jersey Digs, January 11, 2019
PCP Acquisition Partners, LLC has proposed two residential complexes near Bloomfield’s Watsessing Avenue train station. One building will have 24 affordable housing units across 4 stories and the other will consist of 154 stacked townhouse units spread throughout the 8.24 acre property. The project plan is scheduled to be heard by the Bloomfield Planning Board on Tuesday, January 15, at 7 PM, and will require zoning variances to be approved.

Richmond Highway Embarks on a New Era
Covering the Corridor, Alexandria Living Magazine, January 6, 2019
Fairfax County has updated its comprehensive plan to include changes along the Route 1 corridor, known for poor traffic conditions and strip malls. The plan calls for construction of six unique community business centers (CBCs) with bus rapid transit stations. Additionally, the shopping centers will be redeveloped into TODs based around the CBCs, with grids of streets, linear parks, dedicated bike lanes, and large sidewalks.

One of Charlotte’s Signature Projects is in Trouble as City Comes Up $77 Million Short
Ely Portillo, The Charlotte Observer, January 8, 2019
The Cross Charlotte Trail, a 26-mile greenway that will provide foot and bicycle access to the entire city of Charlotte, is $77 million short in its budget. Construction costs have been much higher than anticipated, leaving completion of 10.4 miles of the trail in doubt. Most of the unfunded areas are in the northeast section of Charlotte near the new Blue Line extension, and could be paid for with help from developers who are now working in the areas around the Blue Line stations.

Metro Eyes Collaboration on West Falls Church Metro Redevelopment
Daniel J. Sernovitz, Washington Business Journal, January 8, 2019
WMATA will apply to its board for approval to solicit developers to redevelop the West Falls Church parking area on the Orange Line. WMATA wants to use the 24-acre parcel to generate up to $3.5 million more revenue with a mixed-use property, including a one-for-one replacement of the current parking. The agency has indicated that a joint development agreement with one of two development teams working on adjacent sites would maximize the efficiency of the project and potential revenue streams.

Relief for New York City’s Transit Deserts? Commuter Trains Might Help
Winnie Hu, The New York Times, January 10, 2019
The eastern Bronx suburbs in New York City are slated to receive four new Metro-North stations constructed on property owned by Amtrak in Morris Park, Parkchester, Co-op City, and Hunts Point. The stations will increase the passenger capacity of Metro-North in conjunction with other capital projects focused on expanding service to the entire region. One-third of Bronx residents live within a mile of one of the proposed stations, and city officials are already planning for TOD projects and streetscapes around the new stations.

The Open Portrush Leads to Major Investment in New Train Station
Orlaith Clinton, BelfastLive, January 9, 2019
The town of Portrush in Northern Ireland is set to open its new train station within a few months, in anticipation of golf’s British Open Championship to be held in July. The station includes new and upgraded amenities such as a waiting area for passengers and bike storage for cyclists. Portrush has also received Urban Development Grant funding for other projects that will help revitalize the downtown area.

The 10 Major Developments that would Transform Rochdale by 2037
Nick Statham, Rochdale Online, January 8, 2019
Rochdale Borough in England has republished its 2037 master plan after the original resulted in controversy due to a large rural to urban land change. The new plan limits the land use changes while still allowing for improvements in housing, employment opportunities, and infrastructure. Many of the housing additions and improvements are catering to higher-income residents and are located in towns that have access to a tram or train line.