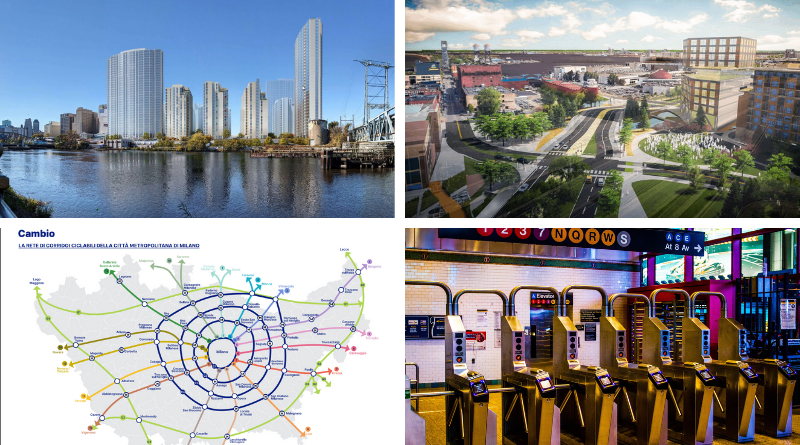 Newark’s Central Planning Board approved the CitiSquare development project from Accurate Builders and Developers, on the site of the now-defunct Newark Bears Stadium. The nine-phase project will eventually encompass 11 high-rises, with 4,200 apartment units and 100,000 sq. ft. of commercial space. At full build-out, the developer will set aside 200 apartments as affordable, will contribute $15 million to Newark’s Affordable Housing Trust Fund, and will establish a program to hire Newark residents for the project. The project is located close to NJ TRANSIT’s Newark Broad Street Station, as well as the Riverfront Stadium Station on the Newark Light Rail.

NEW YORK—Fare Caps Might Get Transit Out of the Pandemic Slump
Peter Yeung, Next City, January 13, 2022
Fare caps allow transit riders the benefit of timed passes, without having to pay for them up front. Beginning in February, through the MTA’s new One Metro New York (OMNY) payment system, riders will be charged no more than $33 per week, no matter how much they use the network. Experts have identified gains in ridership on similar fare-capped systems (such as London’s), though Portland saw a 1.5 percent reduction in fare revenue.

How U.S. Infrastructure Plans Shrank in Ambition
Jonathan English, Bloomberg CityLab, January 11, 2022
Transportation historian Jonathan English details how infrastructure planning has shifted in two distinct ways. First, the vast majority of the United States’ infrastructure base is between 50 and 90 years old and requires expensive maintenance to bring about a state of good repair. Second, the emphasis on investment has shifted from the national to the local level, with fewer highway projects, and more local improvements. Once the new infrastructure bill’s investment is complete, the nation will be much closer to achieving a state of good repair. As English writes “Keeping the country’s infrastructure functioning for the next generation is critical to keeping the nation functioning.”

JERSEY CITY—West Side Avenue Development Site in Jersey City Sells for $6.2M
Chris Fry, Jersey Digs, January 14, 2022
B6 Real Estate Advisors has announced that a developer plans to construct a luxury mixed-use building on Jersey City’s West Side. According to Jersey City’s Westside Avenue Development Plan, the potential structure may include a maximum of six stories, 137 housing units, as well as ground floor retail and parking, as of right. The site is located three blocks from West Side Avenue Station on NJ TRANSIT’s Hudson-Bergen Light Rail.

HIGHLAND PARK—Highland Park Downtown Redevelopment is Key to Stabilizing Taxes, Mayor Says
My Central Jersey, January 8, 2022
Gail Brill Mittler, the mayor of the Borough of Highland Park, said that smart growth policies, such as downtown development and infrastructure improvement, were needed to stabilize municipal taxes. “Smart downtown development,” the mayor said, “will also increase our tax base while providing community benefits from any new developers.”

MASSACHUSETTS—Boston’s New Mayor Tries a Different Tack on Homelessness
Kriston Capps, Bloomberg CityLab, January 14, 2022
Recently-elected Boston mayor Michelle Wu is attempting a new strategy for a persistent encampment of unhoused people near the intersection of Massachusetts Avenue and Melnea Cass Boulevard. The City has leased a hotel for what is called “low-threshold housing,” which provides shelter, and access to resources and services, without residents having to prove sobriety. Thus far, 154 people have moved from the encampment, though several thousand people have been identified as unhoused in Boston.

Did Bergen County, NJ End Homelessness? It’s Complicated
Roshan Abraham, NextCity, January 13, 2021
“Function Zero” is a term coined by the nonprofit Community Solutions, to mean that capacity exists to house all homeless individuals of certain prioritized groups relatively quickly. Bergen County, through its consolidated “one-stop” Housing, Health, and Human Services Center, has consistently achieved the metric over the past five years. However, the metric only counts federally-designated “chronic” (which entails that the individual has a disability), or veteran homelessness, which can omit a significant segment of the population. Thus, Bergen County’s January 26, 2021 count, for example, which included 279 unhoused people, yielded only 4 “chronically homeless” individuals.

UTAH—Utah Is Building a ’15-Minute City’ From Scratch
Kea Wilson, Streetsblog, January 13, 2022
Developers in Draper, Utah, are looking to design a community where residents can meet their daily needs without the use of a car. The Point development will prioritize cycling and walking toward clustered amenities. The model community, which will include capacity for 7,400 households on a one-square mile parcel of land, could begin construction in 2024.

MINNESOTA—Freeway Fighter: A Vision to Replace I-35 in Duluth Gains Momentum
Dan Kraker, MPR News, January 11, 2022
Highway 61 Revisited is an initiative to redesign Interstate 35, which separates the Duluth, MN waterfront and downtown from the rest of the community. The new design would be a lowered, six-lane parkway, with parks, bicycle and pedestrian connections, and potentially homes and businesses, built on top. Duluth’s mayor, city council, and chamber of commerce have endorsed the proposal. The next step is to incorporate the idea into MnDOT’s new I-35 Corridor Plan, which the agency recently secured funds to conduct.

WASHINGTON STATE—Washington Bill Would Legalize Hundreds of Thousands More Homes
Dan Bertolet, Sightline Institute, January 8, 2022
The Washington State Legislature will consider bills that would allow by right construction of up to sixplexes in areas within a half-mile of transit in cities of 20,000 people or more. In these cities, outside of the transit areas, multifamily construction up to fourplexes would be allowed, with duplexes on all residential lots being legalized in cities of 10,000 people or more. The bills would also limit onerous on-site parking requirements. California and Oregon have recently enacted similar legislation, signaling a push for more “missing middle” housing on the West Coast.

ILLINOIS—Chicago’s Historic Pioneer Bank & Trust Will Be Transformed into Affordable Housing
Matt Hickman, The Architect’s Newspaper, January 6, 2022
The vacant, landmark Pioneer Bank & Trust building will be redeveloped into a mixed-use space, with offices, an incubator hub, and a Latino cultural center. On a parking lot north of the historic structure, a nine-story, 75-unit apartment complex will be built, with 100 percent affordable units. The project is part of Chicago mayor Lori Lightfoot’s INVEST South/West initiative, which seeks to use community development strategies to revitalize ten neighborhoods on Chicago’s historically disinvested South and West Sides.

ITALY—Can Milan Become Europe’s Most Bike-Friendly City?
Feargus O’Sullivan, Bloomberg CityLab, January 14, 2022
By 2035, Milan plans to have built 466 miles of separated bike lanes, the largest network of its kind in Europe. The area suffers from high levels of pollution, and the City hopes to make cycling a preferred mode of travel. A hub and spoke style network will connect suburban and rural commuters with destinations, as well as metro stations, with the ultimate goal of building protected cycling routes within 1 kilometer of 80 percent of Milan’s households.

Comparing Social Housing: 30 Projects from Countries Around the World
Niall Patrick Walsh, ArchDaily, January 9, 2022
This article highlights social housing projects from various countries, detailing housing policies as well as architectural styles. Spain, for example, guarantees the right to housing for its citizens, and often gives ownership of subsidized housing over to individuals. Mexico, on the other hand, disburses funds to qualified families (those making less than five times the minimum wage) to construct their own homes.