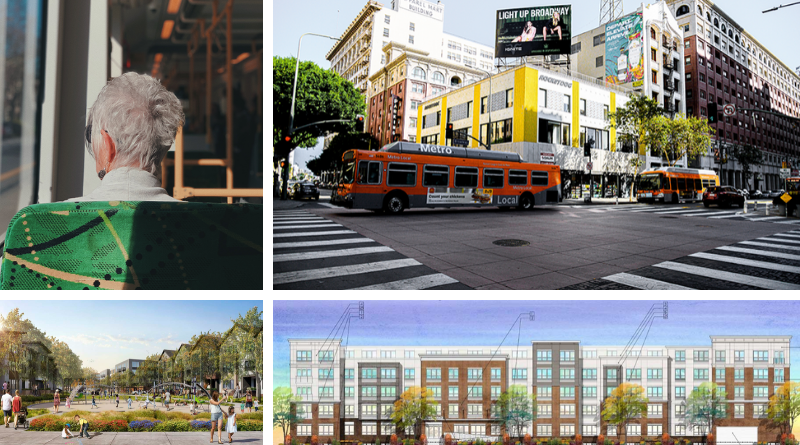 How the ‘15-Minute City’ Could Help Post-Pandemic Recovery
Patrick Sisson, Citylab, July 15, 2020
As the COVID-19 crisis continues to strain the global economy, urban leaders of C40 Cities Climate Leadership Group (C40), an international organization of mayors and planners, is placing its focus on fighting climate change, creating jobs, and promoting sustainable development. On July 13th, the C40 released “Mayors’ Agenda for a Green and Just Recovery,” its green stimulus plan that takes cues from Paris Mayor Anne Hidalgo’s “15-Minute City Model.” The model aims to increase options for micro-mobility and space devoted to walking and biking. In the US, where cities and states are facing major budget shortages, tactical urbanist initiatives, such as pop-ups of sidewalk cafes and bike-ped infrastructure, show that small changes can yield big impacts to the urban economy.

CANADA—Ontario Introduces COVID Recovery Measures Impacting Development and More
Mariam Awan and JD Supra Staff, JD Supra, July 14, 2020
On July 8th, the province of Ontario introduced Bill 197, a COVID-19 economic recovery bill that, if enacted, would provide measures that could affect land development, transit-oriented development, and public transportation infrastructure in the region. It is one example of how cities and regions world-wide are investing in transportation infrastructure to prepare for a post-COVID-19 era. As lockdowns end and cities open up public spaces, the focus of lawmakers and officials is on securing mobility, housing, and job access for their residents.

CALIFORNIA—As Transit Is Cut Off, So Are Seniors
Annika Hom, Mission Local, July 11, 2020
In April, city officials cut most Muni Metro bus routes in the Mission Bay neighborhood to stop the spread of the coronavirus. This move left hundreds of low-income seniors and residents with disability stranded or pressed to secure other options. As the city reopens, and fare revenues are half of pre-COVID levels, routes are likely to remain suspended until the agency identifies alternative funding sources. Many riders will continue to have to walk farther to access one of the remaining 26 routes in operation—an arduous task for many commuters who are less physically-abled. To better serve these customers, the San Francisco Municipal Transportation Agency (SFMTA) recently launched the Essential Trip Card program, a subsidized taxi service that supports riders with disability and residents aged 65 or older, but not seniors between ages 60 and 65 who comprise 20 percent of the city’s population.

20-Unit Development Approved at 377 Fourth Street in Jersey City
Chris Fry, Jersey Digs, July 13, 2020
Recently the Jersey City Zoning Board unanimously approved variances allowing for a planned four-story project to proceed in downtown Jersey City. The project, one of several by Alan Cancro, received permission to increase the number of residential units to 20 (from 17) and to reduce parking. These changes were supported by the project’s location near the Grove Street PATH Station. The project will also offer a bicycle parking area.

Plainfield Approves 104-Unit Development Near NJ Transit’s Netherwood Station
Chris Fry, Jersey Digs, July 9, 2020
On July 2nd, the Plainfield Planning Board approved development for a site at 803 South Avenue. When complete, the project will comprise 104 residential units and 870 sq. ft. of commercial space, and offer 115 parking spaces for cars and 52 bike spaces. The project will also include an underground stormwater management basin. The 1.36-acre site falls within the area addressed in the city’s 2017 Transit Oriented Development Netherwood–South Avenue Redevelopment Plan and is located a quarter mile from the NJ TRANSIT Netherwood Station.

Urbanism Hasn’t Worked for Everyone
By Alissa Walker, Curbed, July 16, 2020
While the 1990s and 2000s have been celebrated by many in planning and development circles as a period of urban renaissance – the era of a so-called “back-to-the-city” movement – others have questioned the resulting changes that have disproportionately displaced people of color and other marginalized communities. Walker draws on examples from around the country and speaks with planners and others active in redressing this situation. She explores how decisions for cities and communities still fail to be inclusive, equitable or affordable, and how professional communities – including the Congress for the New Urbanism, the American Planning Association, and the American Institute of Architects – have remained overwhelmingly white.

MINNESOTA—St. Louis Park Council Finalizes Approvals for Union Park Flats
Seth Rowe, Sun Sailor, July 15, 2020
In a recent Planning Board meeting, the St. Louis Park City Council approved development plans for the Union Park Flats project, a three-story building that will be converted into a high-density residential development. The plans detail 60 housing units for the green energy building, the roof of which will be lined with solar panels. Developers Project for Pride Living applied for tax increment financing assistance, which will exempt the developer from new property taxes for a period of time to pay for “extraordinary expenses.”

GEORGIA—Equitable Development: Master Plan at Hulsey Yard a Successful Example for Murphy Crossing, Elsewhere in Atlanta
Brandon Sutton, Saporta Report, July 12, 2020
Delayed development plans for Hulsey Yard, CSX’s intermodal transit facility in downtown Atlanta, unexpectedly brought communities together in an impressive display of participatory planning and public engagement. More than 1,000 frustrated residents participated in a four-day pop-up studio. The gathering documented community priorities, which include affordable housing, multi-modal transportation, development along the Beltline corridor, and integration with existing public transportation infrastructure. After the success at Hulsey Yard, the City of Atlanta and its residents are looking to implement the same public input process for Murphy Crossing, one of the city’s most important transportation intersections.

MINNESOTA—15-Story Tower Proposed in Uptown
Nate Gotlieb, Southwest Journal, July 11, 2020
Development plans for a 15-story mixed-use residential development in Uptown Minneapolis is under review following mixed feedback from local residents at a neighborhood Zoom meeting. The development by LOCAL Ventures is expected to bring 452 apartments and more than 11,000 sq. ft. of ground retail space to a location just three blocks away from the Uptown Transit Station. If completed, the building will also include a parking garage that will distribute 307 spaces throughout the first five levels. Residents approved of the added retail space and density, but raised concerns about the affordability of the rental units.

UTAH—Over 20 years ago, Utah aimed for ‘quality growth’ as its population boomed. How has that turned out?
Tony Semerand, The Salt Lake Tribune, July 11, 2020
With more than 20 years since its adoption, Envision Utah, the state’s regional planning effort, has led to impressive outcomes. Semerand reviews how the initiative and the strategies adopted to promote “quality growth” affected land and water conservation, vehicle miles traveled, air quality, housing, and transit development across the 10-county Wasatch region. As COVID-19 prompts cities to reevaluate their strategies to manage growth and protect quality of life, officials are looking to Utah as a model.

OHIO—Columbus, OH to Bridge Mobility Silos through LinkUS Initiative
Katie Pyzyk, Smart Cities Dive, July 10, 2020
The City of Columbus is adopting transit-oriented development practices as a solution for increasing congestion woes. Through the LinkUS Mobility Corridors Initiative, the City of Columbus, the Mid-Ohio Regional Planning Commission (MORPC) and the Central Ohio Transit Authority (COTA) will promote economic growth along certain transportation corridors and develop more mobility options for the region. The strategies to be undertaken by the LinkUS Initiative are designed to encourage the growth of jobs and housing, and promote equity and accessibility. MORPC Transportation and Infrastructure Development Director Thea Ewing says “we don’t want to develop something that seems inaccessible to certain segments of the population.”

CALIFORNIA—Transit Projects Fly in the City of Angels
Kevin Smith, International Railway Journal, July 7, 2020
Smith reviews the Los Angeles County Metropolitan Transportation Authority (Metro) 2020 Long Range Transportation Plan, which he terms “the United States’ most ambitious transit development program.” Its vision includes a gender action plan to address the travel needs of female riders as well as a list of spending priorities in four areas: better transit, less congestion, Complete Streets, and access to opportunity. By expanding off-peak transit services and committing nearly $80B in network capacity investments, Metro aims for rail or bus service to be located within a 10-minute walk of 21 percent of LA county residents and 36 percent of jobs. Smith provides an in-depth breakdown of the agency’s strategies for expenses and financing, as well as some key projects on the horizon for 2020 and 2021.

CANADA—Vancouver Kicks Off Series of Work Sessions on Heights District Redevelopment
Chris Brown, Clark County Today, July 15, 2020
The City of Vancouver continues to reach out to the public for input and engagement on a proposed development in one of the city’s oldest and most established neighborhoods, the Height District, a 205-acre area envisioned to be the “new downtown.” To ensure that development is compatible with the community’s vision and design plans, the City has held 22 public workshops and presentations. Utilizing the input gathered, the City has made modifications to the number of residential units in the development, increased the proposed amount of greenspace, lowered maximum building heights, and rezoned several areas of the city.