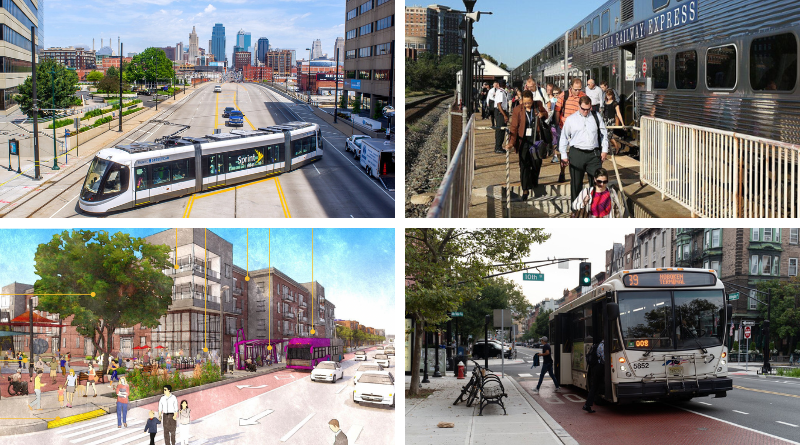 Restoring transit to Kansas City. NJ TRANSIT undertakes redesign of Hudson County bus network. TOD success and inequity in Arlington, VA. Advancing transit-oriented redevelopment in Boise, ID. And Vancouver wants you to be able to take a bus or bike to regional parks.

Invoking a rich past of public transportation, Kansas City’s revival of its streetcar system in 2016 speaks to the city’s desire to reduce its automobile dependency. However, the history of the rise and fall, and rise again, of Kansas City’s streetcars is complicated and contradictory. Within decades of having the third largest cable car network in the country, the city would also grow to have the country’s only Ford automobile plant outside of Michigan. In grappling with the legacy of motor vehicles, and how motor buses squeezed out Kansas City streetcars before themselves losing ground to personal automobiles, Kansas City looks forward to encouraging denser redevelopment in areas well served by its new streetcar system, which endured the pandemic and will hopefully continue to do so for many years to come.

CONNECTICUT—CT Train Riders Are Slow to Return to Shore Line East, Which Is Struggling to Regain Passengers in COVID Era
Abigail Brone, Connecticut Insider, June 20, 2022
When compared to rail lines in Connecticut and elsewhere, Shore Line East has faced greater difficulty in regaining pre-pandemic ridership. The Shore Line East runs between New London and New Haven, where it connects to Metro-North for service to New York City. The line primarily serves white collar workers, whose changing commute patterns may have affected ridership on the line, according to data collected by the State of Connecticut. Comparable lines, such as the Hartford Line which has invested more heavily in transit-oriented development, have reportedly fared better than Shore Line East, ultimately hinting at the importance of TOD and potentially the route’s best path forward.

CANADA—Quebec Lifts COVID-19 Mask Mandate for Public Transit Users
The Canadian Press, The Globe and Mail, June 18, 2022
For the first time since Summer 2020, the Canadian province of Quebec has removed its mask mandate from its public transit services. The mask mandate continues to be mandatory in hospitals and other health facilities.

VIRGINIA—Covid Slammed the Brakes on Public Transit; It May Never Fully Recover
Grant Johnson, Fairfax County Times, June 17, 2022
Decreased ridership due to the pandemic and increasing gasoline prices for drivers has left the future uncertain for Northern Virginia rail lines. Changes in commuting patterns and telework may result in a plateau in ridership and push officials to rely more on the federal government for assistance. It is not yet clear if ridership will continue to recover to pre-pandemic levels.

HUDSON COUNTY—NJ Transit Will Conduct Redesign of Hudson County Bus Network
Kimberly Redmond, TapintoHokoben, June 21, 2022
As part of its efforts to make the system more equitable and appealing to commuters, NJ TRANSIT will conduct a detailed analysis of the existing bus network in Hudson County to evaluate the impact of the pandemic. The project—funded by a $514,045 federal grant from the U.S. Department of Transportation’s Federal Transit Administration—also aims to recognize new activity centers and emerging travel destinations to be incorporated into the redesigned network. According to NJ TRANSIT, similar studies are underway to improve bus networks in Newark and the Burlington-Camden-Gloucester county region.

HOBOKEN—Hoboken Hasn’t Had a Traffic Death in Four Years. What’s It Doing Right?
Christopher Robbins, Curbed, June 17, 2022
Utilizing pedestrian-friendly “daylighting” street design that provides wider lines of sights and narrower streets for automobiles, Hoboken has drastically reduced the number of traffic deaths in its community to zero fatalities in the last four years. With national trends for traffic fatalities worsening, Hoboken’s commitments to improving road safety through cyclist, pedestrian, and traffic visibility infrastructure shows the benefits of TOD policies being argued for in cities across the nation and globe.

NEW YORK—New York’s Subway System Vows to Be 95 Percent Accessible by 2055
Michael Gold, the New York Times, June 22, 2022
Looking to address the New York City subway system’s relative inaccessibility to riders with disabilities, the Metropolitan Transportation Authority (MTA) aims to provide ramps and elevators in 95 percent of its subway’s stations by 2055. Most MTA stations are older than the post-1993 accessibility requirements dictated by the 1990 American with Disabilities Act, and only 27 percent of stations are accessible currently.

VIRGINIA—Arlington’s Ambitious Affordable-Housing Program May Be Overwhelmed by the County’s Success
Ethan Goffman, Greater Greater Washington, June 15, 2022
The success of Arlington, Virginia’s TOD has spurred population growth and increases to property values that, in some ways, have outstripped its affordable housing stock and initiatives. But the way Arlington’s TOD policies are perpetuating inequity remains an open question. The city is overwhelmingly White, having grown more so over the last century. Whereas about 38 percent of Arlington residents were Black in the early 1900s, now Black people now comprise only 9.2 percent of Arlington households, with a median household income of $62,000, compared to $132,000 in White households. As part of its efforts to address these concerns, Arlington is undertaking a missing middle housing study and continues to advocate for more Committed Affordable Units (CAFs) in its negotiations with developers.

NEW YORK—A Regional Rail Plan Aims to Reinvent New York’s Commuter Trains
Skylar Woodhouse, Bloomberg’s CityLab June 23, 2022
The Tri-State Transportation Campaign released a proposal to create a through running rail network. The rail network would better connect all areas served by NJ TRANSIT, Metro-North, and the Long Island Rail Road (LIRR), creating more opportunities for people to live and work within the region, particularly if they do not work in Manhattan.

CONNECTICUT—West Hartford Establishes Transit-Oriented Development District. Here’s What it Means
Michael Walsh, CT INSIDER, June 17, 2022
This week, the West Hartford Town Council unanimously approved an ordinance that establishes a transit-oriented district in town. The newly created district will support the building of “walkable, compact, mixed-use, higher-density, and pedestrian-oriented development within walking distance of mass transit facilities,” defined as a quarter-mile walk from CTfastrak bus stations. To encourage the construction of affordable housing, West Hartford is offering incentives to developers who provide affordable housing at either 60 or 80 percent of the area’s median income.

IDAHO—ITD Formally Announces It Will Leave Boise Campus: Future of Large Site Near Downtown Unknown
Autum Robertson, BoiseDev, June 16, 2022
As the Idaho Transportation Department announces its relocation from a campus in the state’s capital, the City of Boise will act on a redevelopment plan that would establish a new transit-oriented corridor once the land is sold. The site is reportedly one of the largest under-developed areas in Boise’s urban center, and the comprehensive plan, Blueprint Boise, calls for the encouragement of higher density, mixed-use, and transit-integrated development in the area.

TEXAS—San Antonio Consolidates Multimodal Transit Payments in One App
Skip Descant, Government Technology, June 15, 2022
San Antonio’s integration of their transit service, VIA Metropolitan Transit, and BCycle, a local bike share, into the Transit phone app is now available to the public. The consolidation aims to give residents of the city improved access to convenient multimodal travel. Cleveland, Ohio provides precedent for this move, and shows the growing importance of digital technology in transit-oriented living.

CALIFORNIA—99% Invisible Episode 495 – Meet Us by the Fountain
Chris Berube, 99% Invisible, June 14, 2022
Malls changed the American landscape of land use—reflecting growing demand for retail goods and providing a social space for teenagers in suburbs. In this podcast episode, Roman Mars and author Alexandra Lange discuss the history of malls, from their European influences and their original mixed-use concepts, to the question, “What is the future of the American mall?”

UNITED KINGDOM—What’s Next for Transport for London?
Guilherme Rodrigues and John Gibson, CentreforCities, June 22, 2022
The relatively high reliance on fares to fund London’s transit systems has presented financial difficulties in the wake of the pandemic’s reductions in ridership. Further consideration for other funding models such as Asian land value capture approaches, or Paris’ income contributions, is arguably necessary for the United Kingdom’s capital. Illustrating the case for resilient funding for transit systems, London has received the equivalent of over $5 billion from the national government to support transit since the onset of the pandemic.

CANADA—Metro Vancouver Looks to Improve Bus, Bike Access to Regional Parks
Nathan Griffiths, the Vancouver Sun, June 20, 2022
A study that was undertaken to examine bicycle and public transit access to Vancouver’s parks showed that 86 percent of respondents want better access than currently available. The study from Metro Vancouver notes that roughly one-third of Vancouver parks are not accessible by transit at all. As officials continue to investigate their parks’ accessibility, limited travel information on how visitors reach parks slow some of the popular momentum for increased service.