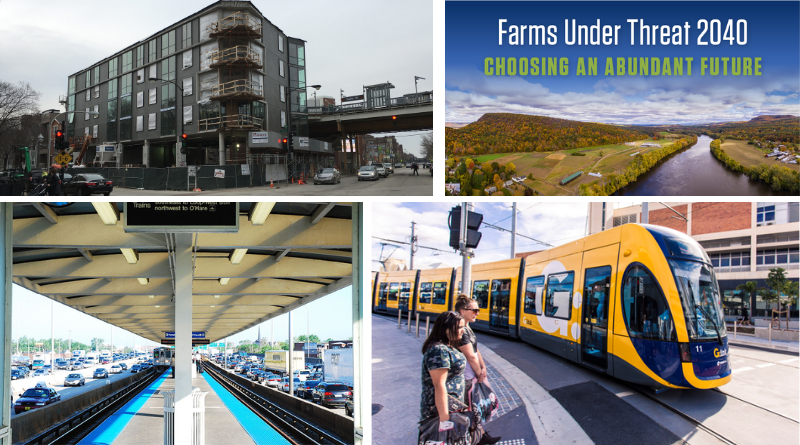 Examining the differences in perspective between planning students, engineering students, and the general public, a recent study has revealed and quantified where attitudes split regarding transportation projects. Critical findings from the study show that though 83 percent of planning students agreed with the goal of reducing driving, only a slim majority of responding engineer students (52 percent) concurred. The public proved even more skeptical at 31 percent—illustrating the rift that transportation planners often need to bridge in executing their vision for American cities. Other topics such as widening roads to address traffic and the concept of induced demand presented an even wider gulf of opinion between planning students and the public. Kelcie Ralph, a Rutgers planning professor and one of the study’s authors, notes that this division likely reflects underlying beliefs about how automobiles grew dominant in American life and highlighted the importance of engineers’ knowledge and place in the planning process.

CANADA—Saskatoon Transit to End COVID-19 Mask Requirement
Josh Lynn, CTV News Saskatoon, June 29, 2022
The City of Saskatoon, Saskatchewan has now ended their transit mask requirements. The Saskatchewan government removed its mask requirements earlier this year, and so for some months, bus operators were not required to enforce the local requirement even before the city council officials made this repeal. Reportedly, masks will still be provided for riders who wish to wear them.

For Mass Transit Agencies, a Fiscal Cliff Looms
Jake Blumgart, Governing, June 24, 2022
If the current trend of depressed ridership, coupled with a depletion of federal grants, continues, three of the nation’s six largest transit agencies may face a financial crisis next summer, and other agencies may experience similar financial difficulties in coming years. The Washington Metropolitan Area Transit Authority (WMATA) is likely to face the most severe fiscal crunch with a funding gap of $519.3 million in the fiscal year 2024 budget with ridership half that of pre-pandemic levels. Similarly, financial projections for the Massachusetts Bay Transportation Authority (MBTA) in Boston show a deficit of more than $600 million, a situation that reflects that many white-collar workers continue to in a hybrid model—working from home one or more days a week. In contrast, the LA Metro has reclaimed 70 percent of 2019 ridership levels as transit use is most prevalent among lower-income groups, many of whom continue to work in frontline, in-person positions.

MORRIS & PASSAIC COUNTIES—Work Underway to Transform Abandoned NJ Railroad Tracks into Walking, Biking Path
Kyle Morel, New Jersey Herald, June 29, 2022
Utilizing 4.8 miles of abandoned railroad, Morris County officials in collaboration with Passaic County are repurposing a portion of the New York Susquehanna & Western Railway route between Pequannock and Wayne to create a 10-foot-wide recreation path. Set to finish in 2024, the federally funded project will provide pedestrians and cyclists with a trail separated from automobile traffic that connects to other greenway trails, such as the Morris Canal Greenway in Passaic County.

NJ Transit Could See $814M for Newark Penn, Hoboken, and 5 Other Stations If Murphy Signs Off
Colleen Wilson, NorthJersey.com, June 29, 2022
Seven NJ TRANSIT stations could receive $814 million for significant renovations if Gov. Phil Murphy ratifies a bill creating a $5.2 billion fund known as the New Jersey Debt Defeasance and Prevention Fund. This budget was released after Murphy declared that NJ TRANSIT fares would not rise for a fifth consecutive year. In addition, a memorandum of understanding struck in 2021 would increase the New Jersey Turnpike Authority’s contribution to NJ TRANSIT from $325 million to $721 million in the next fiscal year.

CALIFORNIA—Land Banking to Prevent Transit-Oriented Displacement in Los Angeles
James Brasuell, Planetizen, June 28, 2022
To ensure more equitable outcomes from new transit-oriented developments in Los Angeles, LA Metro has committed to pursue “land banking,” or the practice of buying land near transit facilities during early planning stages and hold such lands for future development. The goal is to reduce the role of speculation in developing real estate markets and leverage their ownership to better secure affordable housing on desirable TOD sites. Over $50 million has been allocated by the Los Angeles County Board of Supervisors for land banking, and through this process, they hope that displacement can be better avoided as Los Angeles densifies in the coming years.

USDOT to Invest Approximately $16.2M in Transit Improvement Grants for 40 Poverty-Stricken Areas
Chris Galford, Transportation Today, June 27, 2022
The Federal Transit Administration (FTA) has recently announced $16.2 million in competitive grants to combat persistent poverty. Identifying 40 projects for the FTA’s Areas of Persistent Poverty (AoPP) program, these grants are an extension of the Biden Administration’s Justice40 initiative that aims to ensure 40 percent of the funding from the Bipartisan Infrastructure Bill’s climate and health programs benefits disadvantaged communities. The AoPP grants will reportedly assist with creating transit access for residents with little or no transportation options, and were awarded for planning and engineering studies of all stripes.

ILLINOIS—Mayor Lightfoot Introduces Connected Communities Ordinance
Luke Kugler, URBANIZE Chicago June 27, 2022
Mayor Lori Lightfoot introduced an ordinance to reform Chicago’s zoning for areas near transit in order to promote more equitable transit-oriented development (eTOD) and to create walkable and vibrant communities. In 2020, the city found that 90 percent of its TOD developments were constructed in affluent, white communities. This ordinance seeks to support eTOD by reducing parking minimums within a half-mile of stations and a quarter-mile of high frequency bus routes, requiring bicycle parking, and reducing impacts that floor area ratio and unit minimum lot area have on the construction of new homes.

FLORIDA—Miami-Dade Plan for More Housing Next to Public Transit Seeing Backlash. Here’s Why
Aaron Leibowitz and Douglas Hanks, Miami Herald, June 30, 2022
In 2021, Miami-Dade County Commissioner Oliver Gilbert called for action to address the region’s ever-worsening housing and congestion crises. One of these actions was to increase density in locations around transit. This plan called for overriding local zoning within a half-mile of existing and planned transit stops and it mandated that 13 percent of all new units constructed near transit be affordable. Facing opposition, Commissioner Gilbert reduced the impact of the ordinance to require cities to show that they are attempting to encourage housing near transit stops and giving more opportunities for cities to opt out.

ILLINOIS—Can New Chicago Mobility Collaborative Make City Streets Safer For Bicyclists And Pedestrians?
Izzy Stroobandt, Block Club Chicago, June 28, 2022
Reconvening after the two years of interruption, Chicago’s official pedestrian and cyclist forums are set to gather once again under the Chicago Mobility Collaborative. Replacing and combining the functions of the mayor’s Bicycle Advisory Council and Pedestrian Advisory Council, the new group is designed to allow residents and local organizations to have their voices heard by the Chicago Department of Transportation. Reportedly, rising traffic-related deaths and injuries, and the implementation of Complete Streets are key issues that participating activists are looking to start a constructive dialogue on and address in collaboration with the city officials.

UTAH—New Apartments to Rise in Salt Lake Neighborhood at Center of Revitalization Plan
Carter Williams, KSL, June 27, 2022
As Salt Lake City continues to undergo denser development in its urban core, another apartment complex project, Tradition Pointe, has broken ground in the city’s Ballpark transit-oriented development zone. The city government has redevelopment ambitions for the wider neighborhood anchored by the Ballpark TRAX station and a baseball stadium, and is looking to address the area’s housing deficit and rising rents. The Tradition Pointe project is expected to be finished in late 2023 or early 2024 and provide access to local light rail service.

MASSACHUSETTS—South Coast Rail Stations Coming to New Bedford — Here’s How It Will Affect Neighborhoods
Frank Mulligan, The Standard Times, June 23, 2022
The New Bedford Planning Department, in collaboration with the Southeastern Regional Planning and Economic Development District (SRPEDD), is conducting a TOD study for areas near two future stations—North New Bedford on Church Street, and New Bedford at Whale’s Tooth parking lot. The project aims to create zoning overlay districts that support job creation and increased housing as well as to promote transit use and active transportation. According to the New Bedford-SRPEDD team, the overlay districts will be designed to encourage mixed-use development, which includes apartments and affordable housing, office spaces and workshops, and light-advanced manufacturing commercial units.

AUSTRALIA—Fremantle-Cockburn Link Added to Infrastructure Australia Priority List
City of Fremantle, June 24, 2022
Infrastructure Australia, an independent body responsible for advising government and industry projects in its country, has classified a transit project between the Western Australian communities of Fremantle and Cockburn as having national importance to make its “Infrastructure Australia Priority List.” Aiming to bring transit-oriented development to the Perth area, the Fremantle-Cockburn link would ease rapidly growing congestion along its North Lake Road corridor and elsewhere in the region. Additionally, it is hoped that the project will spur economic development in urban cores in a remote part of the country and help meet local governments’ in-fill targets.

CANADA—With Fewer People Taking Transit, Vancouver’s TransLink Gets into the Real Estate Business
Kendra Mangione, CTV Vancouver News, June 23, 2022
Facing revenue concerns at a time of great expansion, Metro Vancouver looks to real estate to generate additional sources of funding. TransLink, which operates Metro Vancouver, plans to construct residential, mixed-use, and commercial TOD near its transit hubs. The authority cites work undertaken by the Hong Kong, London, and Paris transit systems as inspiration for the move. It is likewise hoped that beyond raising more funds creatively, this development will enable more Canadians access to quality transit in one of the globe’s most desirable real estate markets.