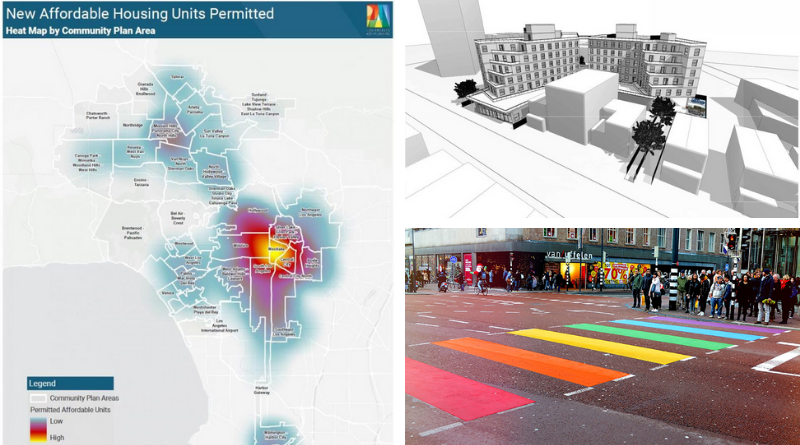 CALIFORNIA—With Transportation, We Must Not Return to ‘Normal’
James Aloisi, Commonwealth Magazine, June 5, 2021

As metropolitan Boston reopens, the region’s debilitating levels of traffic are returning. In this op-ed, a former state transportation secretary argues that the goal should not be pre-pandemic normalcy, but rather, a 10 to 15 percent mode shift from single occupancy vehicles to transit, accomplished by more frequent service and investment in first and last mile connections (such as bike shares or shuttles). To reach this necessary mode shift objective, Aloisi recommends a fee be levied on cars traveling to the airport, additional operating funding to the MBTA, and a road pricing program in the vein of London or Stockholm’s models.

NEW YORK—Queens Grabs Bigger Share of Subway Ridership as Pandemic Shifts Commutes
Jose Martinez and Dmitri Fautsch, The City, June 9, 2021
While systemwide ridership has recovered by 40 percent, in Manhattan, that figure is only 23 percent. Three other boroughs, the Bronx, Queens, and Brooklyn, have increased their share of overall ridership, while Manhattan’s is falling. The data demonstrates the importance of essential workers as the core riders of transit, and the potential for the MTA to equalize service levels throughout the day, rather than concentrating on a peak ridership that may not return.

NEW YORK—New York Is Back. Now It Has a Second Chance.
Jonathan Mailer, The New York Times Magazine, June 8, 2021
As New York City reaches 55 percent of adults vaccinated, a “return to normal” prompts an examination of the pandemic’s effects. Facing bankruptcy in the 1970s, New York turned to private actors to reinvigorate what was then a majority working class city, and is now dominated by. To the author, however, with two thirds of City Council seats open and the prospect of a new mayor, this election year presents the promise of a fresh start transforming how the city operates.

ILLINOIS—Chicago Must Revive the Not-So-Magnificent Mile to Thrive Again
Shruti Singh and Jordyn Holman, Bloomberg CityLab, June 8, 2021
The COVID-19 pandemic has hit Chicago’s Magnificent Mile, a central shopping district and tourist attraction, particularly hard—there is currently a 22 percent vacancy rate along the corridor. For Chicago, a city with a declining tax base and unfunded pension liabilities in the billions, the loss of sales tax revenue could hurt municipal services. The City is actively working to recruit new businesses, though a Bloomberg data analysis shows that foot traffic for high-end retail has been especially slow to return.

PENNSYLVANIA—What Will Happen to Center City If Commuters Never Return?
Jake Blumgart, Philadelphia Magazine, June 5, 2021
The author looks at the future of Philadelphia’s Center City, as some professionals stay home even after the pandemic fades. How will the City’s economy change if even 20 percent of the 120,000 daily commuters from 2019 decide to stay home? As tax revenue shrinks from the loss of office space and payrolls moving to the suburbs, city services could become strained and the municipal budget could spiral. In the end, it will require a rethinking of downtown space and transit service—a more resilient, diversified Philadelphia.

JERSEY CITY—Residential and Religious Development Might Replace Jersey City Church
Jared Kofsky, Jersey Digs, June 9, 2021
A Brooklyn-based developer has applied to Jersey City to redevelop a one-story church building into a 110-unit residential complex, with a new house of worship inside. Though Jersey City has an affordable housing ordinance, the application specifies that “no affordable housing units” would be included in the project. The development would be a short walk from the Danforth Avenue Station on NJ TRANSIT’s Hudson-Bergen Light Rail.

GALLOWAY—Housing, Shopping, Train Stop Part of Galloway Route 30 Project Discussion
Vincent Jackson, The Press of Atlantic City, June 8, 2021
The Galloway Township Planning Board approved a mixed-use development, with a 20 percent affordability requirement for its housing component. The project, Pomona Commons, will include 100 spaces for a park-and-ride, to support a future infill station on the NJ TRANSIT Atlantic City Line.

NJT: We’re Ready for Your Return
William C. Vantuomo, Railway Age, June 7, 2021
NJ TRANSIT launched a communications campaign celebrating its accomplishments throughout the pandemic, and an accompanying “While You’ve Been Away” video. The agency has purchased 113 new multilevel train cars, as well as 25 new dual-power locomotives. There are also 300 new buses on the way. NJ TRANSIT is touting a rewards program, an updated mobile app with real-time capacity monitoring, and the Flexpass, a more flexible ticketing option for modified commutes. Further updates can be viewed at www.njtransit.com/progress.

The Queer City: How to Design More Inclusive Public Space
Pippa Catterall and Ammar Azzouz, The Conversation, June 7, 2021
A University of Westminster professor and Oxford research associate detail how cities have historically failed to consider the LBGTQ+ experience in their planning and policies. The authors recommend three ways to address this gap: design to improve safety with greenery and proper lighting; plan for housing outside of the heterosexual family model—for all people and kinds of families; and make places more visibly inclusive to queer heritage and experience to signal belonging and undermine public hostility.

CALIFORNIA—Planning Department Proposes “Fair Share” Allocations for Affordable Housing
Steven Sharp, Urbanize Los Angeles, June 8, 2021
A new report by the Los Angeles Department of City Planning analyzes affordable housing construction in the area, and suggests how the City can meet its 456,643-unit obligation equitably. The planners found that the vast majority of new affordable units have been built in low-resource communities. High-resource communities have only added 14 percent of the total share. In addition to concentrating near-term development near transit stops, the report recommends that the City implement an incentive-based inclusionary housing policy that would require developers to allocate a portion of new units to affordable housing. In 2019, 20 percent of units approved for construction were designated as affordable.

NEW YORK—New York City Can’t Just Gentrify Its Way Back to Normal
Ginia Bellafante, The New York Times, June 4, 2021
The columnist Ginia Bellafante discusses persistent poverty in New York City, visiting the Brooklyn neighborhood of Brownsville to discuss the dearth of programs and support for struggling community members. Bellafante concludes that the staid tactic of attracting high-earners to “revitalize” a neighborhood omits a much harder, but even more necessary strategy: promoting the economic development of those who already live there.

TEXAS—Can a Rapid Bus Line on Lancaster Transform These East Fort Worth Neighborhoods?
Luke Ranker, Fort Worth Star-Telegram, June 9, 2021
Trinity Metro, Fort Worth’s transit agency, is studying a potential Bus Rapid Transit (BRT) line that could revitalize a car-centric strip that hosted streetcars a century ago. The current bus route is Trinity Metro’s highest ridership line. To further encourage development, the Forth Worth City Council has adopted a tax incentive for developers who wish to build within a mile of rail or BRT stops.

MISSOURI—Kansas City Transit Agency Considers Economic Development
Kevin Hardy, The Kansas City Star, June 8, 2021
The Kansas City Area Transportation Authority (KCATA) has unique, bi-state jurisdiction, straddling seven contiguous counties in Kansas and Missouri. The agency’s chief executive, Robbie Makinen, hopes to leverage this unique position to pursue more economic development in the region, and recently formed the Ride KC Development Corporation, which could issue bonds and transfer agency property to attract developers. Some local municipal officials are skeptical of the Kansas City area’s appetite for more transit and transit-oriented development, but others, such as the CEO of the Greater Kansas City Chamber of Commerce, think that the transit agency should at least have a seat at the table

NIGERIA—Lagos-Ibadan Standard Gauge Railway in Nigeria Officially Starts Commercial Operations
Construction Review Online, June 11, 2021
This new Nigerian rail line will carry both passengers and freight, and provide a much needed link from the Atlantic Ocean port in Lagos to the Ibadan industrial center. The railway will eventually stretch across the country to Kano, near the Niger border. The project was built by the China Civil Engineering Construction Cooperative, as part of the Chinese Belt and Road Initiative (BRI).

INDIA—Environment, Economy, Mobility, Heritage: Key Areas in Draft Delhi 2041 Master Plan
The Economic Times, June 9, 2021
The Delhi Development Authority (DDA) released the draft Master Plan for Delhi 2041. The plan calls for increasing the housing stock for renters, and ensuring new housing is located close to job and education centers, as well as transit. Further into the future, plans call for a large amount of housing to be developed in greenfield locations using a land pooling model, in which the government temporarily takes over a group of parcels to develop infrastructure, and then cedes the improved land to the original owner.

March 16, 2018 Steph_Admin Comments Off on New and Newsworthy: January-February 2018