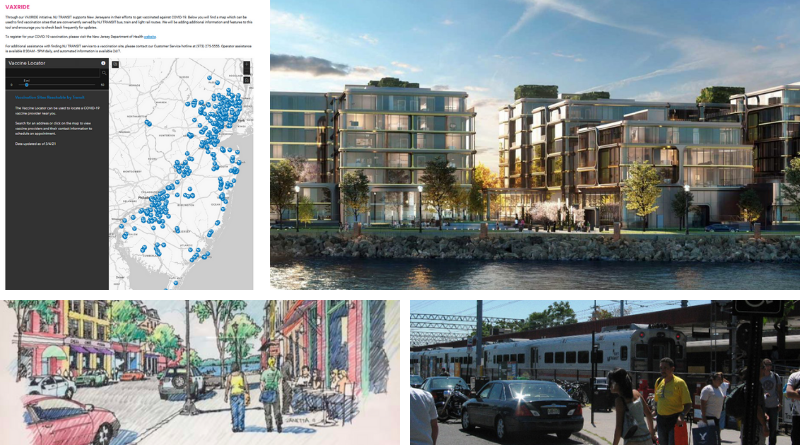 The American Rescue Plan Act allocates $30.5 billion for cash-strapped transit agencies around the country. The bill will send funds to regional Metropolitan Planning Organizations (MPOs) that will then disburse them to individual agencies, prompting some concerns that certain transit providers might miss out. According to analysts, however, most agencies will receive enough funding to maintain service through the end of 2022.

PENNSYLVANIA—Wolf Administration Highlights Free, Subsidized Public Transit to Vaccine Appointments
Press Release, Commonwealth of Pennsylvania, March 10, 2021
Pennsylvania Governor Tom Wolf reminded residents that public transit was available in every county across the state to transport them to vaccine appointments, as either free or subsidized trips. Over 3 million Pennsylvanians have received at least one vaccine dose so far.

NEW YORK—How Coronavirus Has Changed New York City Transit, in One Chart
Veronica Penney, The New York Times, March 8, 2021
A chart created by The New York Times demonstrates the year-long effects of the COVID-19 pandemic on transit ridership, as well as socio-economic realities of the region. Higher income neighborhoods have seen steeper declines in subway use, while areas in the outer boroughs have retained the highest percentage of riders. Bus ridership saw the smallest drop, at only 40 percent, and bridge and tunnel car traffic has returned to near pre-pandemic levels.

TENNESSEE—A Year of COVID: Cautious Optimism for a Public Transit Rebound
Alejandro Ramirez, Nashville Scene, March 4, 2021
In Nashville, public transit agency WeGo is evaluating changes in ridership over the last year, and how best to bring back (and fund) service. While numbers system-wide are down 55 percent, the agency has seen durable ridership from essential workers and in low-income neighborhoods. WeGo plans to expand service on the most-crowded routes.

NEW JERSEY—VaxRide NJ
Press Release, NJ TRANSIT, March 4, 2021
NJ TRANSIT’s VaxRide initiative is an interactive map that shows transit-accessible vaccination sites across the state. Riders can use the free tool to find out which bus, light rail, or commuter rail routes can transport them to get their COVID-19 vaccine.

NEW JERSEY—NJTIP @ Rutgers Creates List of Public Transit Routes for Coronavirus Vaccine Sites
Veda Kota, The Daily Targum, March 2, 2021
The New Jersey Travel Independence Program (NJTIP) @ Rutgers, which works to expand mobility for people with disabilities and seniors, has used funds from NJ TRANSIT to develop a list that breaks down vaccine sites by county and transit-accessibility. The list will be updated every two weeks.

10-Story Development Planned at Former Siperstein’s Property in Jersey City
Chris Fry, Jersey Digs, March 10, 2021
On Bright Street in Jersey City, part of an old paint factory will be demolished by developer Six Boro Holdings and replaced with a 128-unit mixed-used development. The project site is within walking distance of both the Grove Street PATH Station and the Hudson Bergen Light Rail’s (HBLR) Jersey Avenue Station. The classic “Siperstein’s” sign, long visible from the highway, will be preserved in its place.

‘Gateway is Going to be a Priority’
ROI NJ, March 8, 2021
Rising optimism for the Gateway Program, a partnership between New Jersey, New York, and Amtrak to replace aging tunnels beneath the Hudson River and to improve rail travel in the region, stems from encouraging statements of support from the federal government. Polly Trottenberg, former commissioner of the New York City Department of Transportation, now Deputy Secretary of Transportation, spoke highly of the program at a recent confirmation hearing.

VIRGINIA—Supervisors Move to Ease Restrictions for Mixed-use, Transit-Oriented Development
Daniel Berti, The Prince William Times, March 10, 2021
The Prince William County Board of Supervisors approved a measure to encourage mixed-use development in both urban and suburban areas, such as near the county’s Virginia Railway Express (VRE) and Metro stations. The vote was split along partisan lines, with the Republican minority opposing the measure.

PENNSYLVANIA—The Architect Behind Schuylkill Yards’ Big, Red Tower Wants You to Believe in Philly
Ariella Cohen, WHYY, March 9, 2021
Vishaan Chakrabarti, architect and Dean of the UC Berkeley College of Environmental Design, spoke about his enduring belief in the need for urban development, despite suburban work-from-home trends. The architect called for a shift to a denser, more residential Center City. An example from his own practice involves a massive project adding more office, retail, and residential space to the area immediately west of Philadelphia’s 30th Street Station.

MASSACHUSETTS—Kennealy Cheers “Easier Path” to More Housing Production
Chris Lisinski, WLLP News, March 3, 2021
Massachusetts Secretary of Housing and Economic Development Michael Kenealy said that municipalities in the state should use the new “Housing Choice” state zoning reform law to continue efforts to develop more densely. The bill lowered the vote threshold for municipal rezoning to a simple majority (rather than two-thirds) for transit-oriented housing development, and allocated state funds toward affordable housing production in such projects.

ENGLAND—Plans for Cinema, Housing and Green Space Around New Somerset Train Station
Stephen Summer, Somerset Live, March 12, 2021
Aberdeen Standard Investments, in partnership with the Portishead Town Council and North Somerset Council, will redevelop a transit-adjacent brownfield site in the town, in accordance with the long-awaited restoration of rail service to Portishead. A steering committee hopes to transform the site into a central link for Portishead that would contain greenspace and affordable housing, as well as retail and entertainment uses.

DENMARK—Copenhagen’s New Artificial Island Hits Rough Seas
Feargus O’Sullivan, Bloomberg CityLab, March 10, 2021
An economic development agency in Copenhagen plans to construct Lynetteholm, a new 1.1 sq. mi. island in the city, to ease a housing crisis and provide funding for new transportation projects. The island could house up to 35,000 people and help to fund a subway and beltway that would better connect Copenhagen to its airport and nearby Malmo, Sweden. Some stakeholders, however, have concerns about the project’s environmental impacts and whether any of the new housing will be affordable.

BANGLADESH—Metro Rail Project: Commercial Hubs at Stations to Generate More Revenue
Anowar Hossain, The Daily Prothom Alo, March 9, 2021
The Dhaka Mass Transit Company Limited (DMTCL) announced its intentions to construct TODs in every station of the metro system currently under construction in order to offset capital costs of the planned six-line system. The DMTCL TOD hubs would include hotels, shopping malls, and entertainment centers, though housing development was not specified.