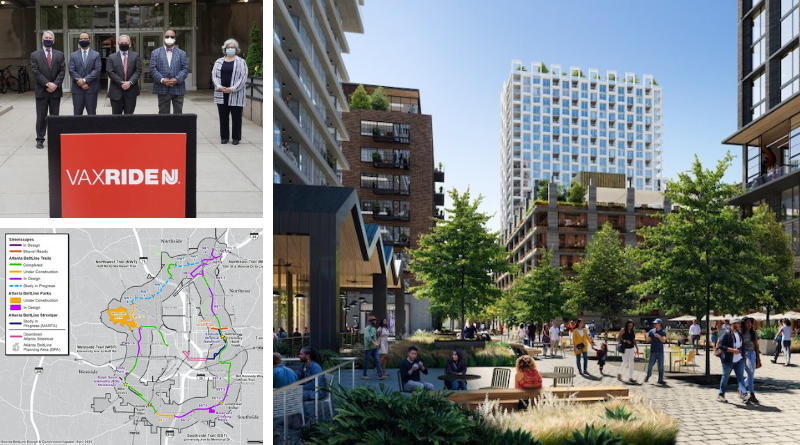 New York, New Jersey, and Connecticut announced a target date of May 17 for the relaxation of COVID-19 restrictions, such as sports and art venue capacity limits. The New York City Subway will return to 24-hour service as well. However, businesses will still have to follow federal social distancing guidelines, which call for a minimum distance of six feet between patrons. Indoor mask regulations will remain as well. Some medical experts expressed skepticism about the reopening, pointing to low vaccination rates among at-risk groups, such as people over the age of 85, and persons in low-income neighborhoods.

CALIFORNIA—LA Metro Is Restoring Service To Pre-Pandemic Levels And Wants To Hire 800 New Bus Drivers To Get There
Ryan Fonseca, LAist, May 5, 2021
Ridership on Los Angeles Metro buses is currently at 55 percent of pre-pandemic levels—and rising. To boost capacity, the agency is hoping to hire 800 new part-time bus drivers in the coming months to expand service and meet the increasing demand. Metro had cut bus service by 20 percent at the onset of the pandemic.

NEW JERSEY—NJ TRANSIT Offering Free Rides To & From COVID Vaccination Sites
CBS New York, May 4, 2021
NJ TRANSIT announced a new public-private partnership to help residents get vaccinated. VAXRIDE will cover transit travel for two roundtrip journeys to a vaccine clinic and will be able to support trips for up to 11,000 New Jersey residents. The program has been made possible through support from companies such as the pharmaceutical manufacturer Novartis.

Transit Mask Mandate to Remain Through Sept. 13
Mischa Wanek-Libman, Mass Transit, May 3, 2021
The Transportation Security Administration (TSA) has extended its requirement that all users of airports, buses, and passenger trains wear face coverings, now through September 13, 2021. The civil penalty for not wearing a mask in these facilities is $250 for a first offense, and as much as $1,500 for repeated violations.

WEST ORANGE—Development with ‘Affordable’ Apartments Proposed for West Orange’s Valley Section
Jared Kofsky, Jersey Digs, May 4, 2021
A developer affiliated with The Alpert Group has applied to build a three-story apartment building comprising 17 affordable units. The apartment complex would be constructed on a parcel owned by the Township of West Orange and would help meet the developer’s affordable housing obligation for a separate development on Central Avenue. According to the plan, no parking would be built, taking advantage of the project’s proximity to the NJ TRANSIT Highland Avenue Station.

JERSEY CITY—Planning Board Approves High-Rise ‘Just Steps’ from Liberty State Park and Light Rail
Bob Towey, TapInto Jersey City, May 2, 2021
The Jersey City Planning Board unanimously approved a twenty-four story mixed-use development in the Lafayette neighborhood. The complex will contain 169 housing units, as well as ground floor retail space, and storage capacity for 85 bicycles in the small-scale parking garage. The project’s minimal parking is owed to its proximity to the Liberty State Park stop for the Hudson Bergen Light Rail.

NEW JERSEY—Municipal Aid Applications Being Accepted for Nearly $165M from NJDOT
New Jersey Department of Transportation, Cape May County Herald, April 29, 2021
The New Jersey Department of Transportation (NJDOT) announced that its grant solicitation period for FY2022 projects was now open, with the agency accepting applications for municipal aid, Transit Village, Bikeway, and Safe Streets to Transit project funding from April 27 through July 1, 2021. NJDOT has allocated $1 million to municipalities designated as Transit Villages to assist with projects that “enhance biking, walking and/or transit riding within one-half mile of the transit facility.”

NORTH CAROLINA—Raleigh OKs $6.35 Million for Affordable Housing Along Future Bus Lines
Anna Johnson, The News & Observer, May 6, 2021
The City of Raleigh will spend $6.35 million to construct two affordable housing developments along proposed Bus Rapid Transit (BRT) routes. New Bern Crossing will add 182 affordable units on the eastern BRT corridor, and Thrive at Renaissance will contribute 91 affordable units on the southern BRT line. Both developments will provide housing for area residents making between 30 and 80 percent of Area Median Income (AMI), and are being funded by the City of Raleigh, Wake County, and pending tax credits from the State of North Carolina.

GEORGIA—The Atlanta BeltLine Wants to Prevent Displacement of Longtime Residents. Is it Too Late?
Jared Brey, Next City, May 4, 2021
Currently under construction, the Atlanta BeltLine is a 22-mile rail trail that will encircle the city. Planning for and construction of the BeltLine has driven real estate development—and fears of displacement—across Atlanta, raising concern among housing advocates that the project is not doing enough to help existing residents. An initiative of the BeltLine Partnership, the Legacy Resident Retention Program, covers the increase in taxes for applicants making below Area Median Income (AMI) through 2030. However, to date, only 12 people have been approved, and Partnership director Rob Brawner admits that private philanthropy is not a long-term solution. Policy proposals by the Housing Justice League include steering tax stabilization funds toward lower-income residents by lowering the program eligibility threshold, developing adjacent vacant land into affordable housing, and instituting property tax limits for low-income homeowners, among others.

PENNSYLVANIA—A ‘Progressive’ Approach to Taxing Land Gains Traction in Philly Council
Taylor Allen, WHYY, May 4, 2021
The City of Philadelphia is considering a shift from a traditional property tax structure to a land value tax, a move that progressive advocates say could help reduce a burden on low-income homeowners. Rather than basing taxes on improvements to the land (such as buildings), the tax levy would reflect the value of the land itself. This move would discourage speculation—taxes on an empty parcel would be similar to taxes on an adjacent developed one. If Philadelphia were to switch to taxing 50 percent of its geography within the traditional model, and taxing the other using land value, homeowners could save a collective $60 million annually, which would especially help low-income homeowners struggling with high assessments.

NEW YORK—To Save Penn Station, New York Wants to Build 10 Skyscrapers
Matthew Haag and Luis Ferré-Sadurní, The New York Times, May 5, 2021
New York Governor Andrew Cuomo, embattled amidst nearly a dozen sexual assault and harassment accusations, continued to press for a plan that would redevelop acres around Penn Station into high-rise office and residential towers, the leasing of which would pay for the overhaul of the central commuter hub. Some are concerned that reduced demand for office space calls into question the funding conceit for the redevelopment plan. Additionally, the project does little to address regional capacity constraints, adding train platforms but not relieving delay-causing bottlenecks.

CALIFORNIA—Proposed Megaproject the Latest to Redefine Los Angeles’ Core
Roger Vincent, The Los Angeles Times, April 29, 2021
A new large-scale mixed-use development will replace a seven-acre cold storage facility in Los Angeles’ Arts District, if developer Continuum Partners’ plan is approved. The complex will include 572 condominiums and 949 apartments, with 216 allocated for low-income renters. The project will be proximate to LA Metro’s Little Tokyo Station, currently under construction, and another proposed node near 6th Street and the Los Angeles River.

CALIFORNIA—Housing: Big Apartment Complex is Eyed in North San Jose
George Avalos, The Mercury News, April 28, 2021
The Hanover Co. hopes to build a new complex of 351 apartment units and 32 townhomes in North San Jose, next to the Penitencia Creek VTA Light Rail Station. Because the Bay Area is notorious for high housing costs and staunch opposition to denser development, transit-oriented complexes such as these are notable. The company is also close to finishing construction on another TOD in downtown San Jose, near CalTrain’s Diridon Station.

United Kingdom—Plaid Vow to End Westminster’s ‘Great Train Robbery’ and Create National Rail Network for Wales
National Cymru, April 30, 2021
Adam Price, leader of the Welsh party Plaid Cymru, pledged to wrest control of public transportation from London and develop a national network for Wales, one that would spend the revenues from Welsh taxpayers on projects in the region. Price cited projects like HS2, an expensive north-south high-speed rail corridor that bypasses Wales entirely, as one reason for the change. The call came on the eve of the 2021 Welsh Parliamentary election.

VIETNAM—The Way Out for Hanoi’s Railways
VietNamNet, May 5, 2021
Successful transit development models in Asia and across the world may suggest solutions to address the poor state of railways in Hanoi. Jakarta, for example, built its system using recycled Japanese trains and BRT routes, and is now a model integrated system. The author suggests using the 110 kilometers of existing rail capacity to develop a suburban system that alleviates crippling traffic in Hanoi, and investing funds to bring the system into a state of good repair, rather than on building eight kilometers of Hanoi’s metro line.

May 22, 2014 Steph_Admin Comments Off on Perth Amboy Fast Tracks its TOD Plans