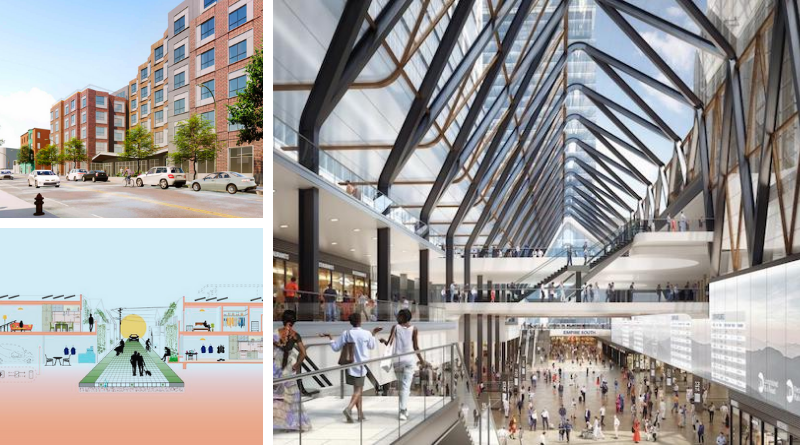 Throughout History, the US Failed to Integrate Transportation and Land Use. It’s Still Hindering Policymaking Today.
Yonah Freemark, Urban Institute, May 17, 2021

Summarizing arguments presented in a longer research article, author Yonah Freemark points to the silo-ization of the U.S. Department of Transportation (USDOT) and the Department of Housing and Urban Development (HUD) as one reason for lack of coordination in housing and transportation policy in the United States. Looking at the history of the two organizations (neither of which existed before 1961), Freemark charts how shifting jurisdictions and an ultimate separation of the two contributed to decade-over-decade declines in commute to work trips by transit and walking. Taking cues from efforts by agencies in Japan, France, and Spain, the U.S. could tackle the complicated, interrelated issues of transportation and land use through a more comprehensive approach.

After Showing its Worth During Pandemic, Momentum Builds for Free or Reduced-Fare Transit
Maria Aguilar, Lo Bénichou, Seth Blanchard, Justin George, and Shika Subramaniam, The Washington Post, May 17, 2021
The pandemic has demonstrated how pivotal mass transit is to service workers that keep the city economy functioning. As ridership is not expected to reach 2019 levels until 2024, some transit and government officials are suggesting making transit free for those who need it most. Agencies in D.C., New York, and the Bay Area are currently exploring the feasibility of such proposals. In 2019, Kansas City, MO eliminated transit fares for all residents, and Seattle’s King County Metro approved a measure to provide free transit passes to low-income residents.

NEW YORK—New York City Subway Returns to 24-Hour Service
Winnie Hu, Nate Schweber, and Sean Piccoli, The New York Times, May 17, 2021
The New York City Subway, which for the past year was closed from 1:00 to 5:00 AM for cleaning, resumed its 24/7 operating hours on May 17. During the closure, some advocates complained that the reduced hours were harmful to low-income people, particularly those of color, who disproportionately hold night shift jobs and relied on the subway to get to work.

NEW JERSEY—As Ridership Grows, NJ Transit Mourns Employee Lost to COVID
Larry Higgs, NJ.com, May 12, 2021
NJ TRANSIT CEO Kevin Corbett honored the memory of a 45-year-old rail car inspector at the beginning of the agency’s Board of Directors meeting. The loss comes as the agency’s workforce saw its lowest percentage of positive tests since the advent of the pandemic. Ridership on the agency’s rail system has slowly recovered over the past year, with weekday levels climbing to 30 to 35 percent of 2019 levels.

TRENTON—In Trenton, Van Sciver Redevelopment Project Connects Glory of Past to Hopes of Future
Tom Bergeron, ROI-NJ, May 19, 2021
The historic 1930s Van Sciver building, which formerly housed a furniture business and then office space, will be incorporated into a mixed-use development that will add 120 housing units and 7,500 sq. ft. of retail space adjacent to Trenton’s Historic Mill Hill District. The redevelopment is being spearheaded by the New Jersey State Capitol Partnership, a taskforce created by Governor Murphy in 2018 to revitalize idle structures in Trenton. The new development is served by several NJ TRANSIT bus routes and is a 13-minute walk from the Trenton Transit Center, with NJ TRANSIT, Amtrak, and SEPTA service.

NEW YORK—2 Options Reveal Plans to Bring More Light into Remodeled N.Y. Penn Station
Larry Higgs, NJ.com, May 19, 2021
Amtrak, the MTA, and NJ TRANSIT are soliciting commuter feedback on two alternatives for transforming New York Penn Station’s subterranean facility, either of which would dramatically increase space for passenger circulation. One would preserve the two-level layout, repurposing Amtrak’s current space for NJ TRANSIT, while the other would create a single level space for commuters that provides increased sightlines and an atrium-like ceiling to bring more light into the space.

EAST ORANGE—Board Approves Plan to Bring Two-Building Complex with 323 Apartments to East Orange
Jared Kofsky, Jersey Digs, May 14, 2021
The East Orange Planning Board approved a development plan with variances for a two-building plan to bring 323 housing units to the municipality. The apartments will be a short walk to NJ TRANSIT’s Brick Church station, as well as the Route 41 bus that terminates at Newark Penn Station.

SOUTH AMBOY—South Amboy Receives $1 Million for Cyclist/Pedestrian Link
TapInto Raritan Bay, May 14, 2021
As part of the USDOT’s Transportation Alternatives Set-Aside Program, the City of South Amboy will receive $1 million to construct an active transportation corridor for cyclists and pedestrians between South Amboy’s NJ TRANSIT station and the City’s proposed ferry terminal. The grant will provide for walkway facilities along the waterfront, part of a longer-term plan to build 1.5 miles of waterfront walkway reconnecting the City to its waterfront.

JERSEY CITY—12-Story Buildings Could Rise Where Car Dealership Once Operated in Jersey City
Jared Kofsky, Jersey Digs, May 13, 2021
Developer Journal Square Estates, LLC. has applied to redevelop a disused car dealership into two 12-story buildings comprising 373 housing units. There are already several multistory complexes alongside the site, as well as another 99-unit project planned nearby. The development site is served by NJ TRANSIT’s bus routes 2, 88, and 125 and is located an 11-minute walk from the Journal Square PATH station.

TEXAS—Austin Charts New Territory With Project Connect Anti-Displacement Fund
Benton Graham, Austin Chronicle, May 21, 2021
When voters in Austin approved the Project Connect ballot proposal last November, the $7.1 billion measure included $300 million dedicated to anti-displacement tactics to counter rising housing prices from expanded transit amenities. The City has hired Nefertiti Jackson, its first Community Displacement Prevention Officer, who will work to guide the funds—the first round of which, $23 million, will be available soon. The City is also developing an equity tool to ensure anti-displacement efforts have the greatest impact.

MASSACHUSETTS—Boston City Council Considers Eliminating Parking Requirements for Affordable Housing Developments
Christian MilNeil, Streetsblog, May 19, 2021
Two Boston City Councilors recently introduced a motion that would ask the Zoning Commission to wave parking requirements for low-income housing developments. The move was prompted after a Jamaica Plain building owner successfully used fear of lost parking in a suit to halt development of an affordable housing complex. The motion received support from six other City Councilors and was referred to the Council’s Committee on Government Operations.

CALIFORNIA—County Supervisors Move Closer to Regional Transportation, Land Use Plan
City News Service, Times of San Diego, May 19, 2021
The San Diego County Board of Supervisors met to discuss a new regional plan that complies with California’s Senate Bill 743. The bill mandates that transportation impacts are measured by the change in Vehicle Miles Traveled (VMT) rather than the traditional Level of Service (LOS) metric. Developments that do not significantly change VMT (defined by the county as less than 110 average trips per day), would not have to pay for expensive mitigation projects. This approach to traffic analysis encourages walking and transit use, but the county must first determine how to implement this new requirement into their comprehensive plan.

CALIFORNIA—L.A.’s Modest Solution to the ‘Missing Middle’ Housing Problem
Kriston Capps, Bloomberg CityLab, May 18, 2021
The City of Los Angeles announced winners of its Low-Rise challenge, an initiative to develop pragmatic solutions for expanding the city’s housing stock. The first prize winner in the “Suburban” category imagines transforming public alleys into pedestrian streets lined with duplexes. The goal of the project was to foster a consensus about densification at a more human scale.

CHINA—Past, Present and Future: The Evolution of China’s Incredible High-Speed Rail Network
Ben Jones, CNN, May 20, 2021
Since 2008, China has built over 20,500 miles of high-speed rail across the country, and expects to complete another 20,000 miles by 2035. At the same time, the government is planning new urban centers that intersect with these networks, such as the Xiong’an New Area in the province of Hebei. However, while the country has gained huge efficiency from centrally planned (and funded) projects, this approach has received criticism for ignoring context as well as the needs of local communities.

MALAYSIA—Protect Selangor’s Environment With TODs, Says State Exco
Afiq Aziz, The Malaysian Reserve, May 17, 2021
Selangor executive councilor (exco) Ng Sze Han suggested that the state’s jungles could be better preserved by pivoting to a development model that prioritizes vertical growth and transportation connections. Ng acknowledged that this posed a “chicken and egg” challenge of whether to develop transit or wait for density first. Ng said that municipalities in Selangor were drafting policy to encourage TODs, and that the state would permit high-rise building construction in areas close to train stations.

CHINA—Shanghai’s Grand Plan for Suburbia: Avoid Becoming Like L.A.
Bloomberg CityLab, May 14, 2021
Hoping to relieve congestion and drive regional growth, Shanghai plans to build new city clusters in its suburbs, transforming farm and factory land into well-connected innovation centers. The government is pledging transit expansion to coincide with the development in these satellite cities, to increase mass transit connectivity as new tech and housing hubs emerge on Shanghai’s periphery.