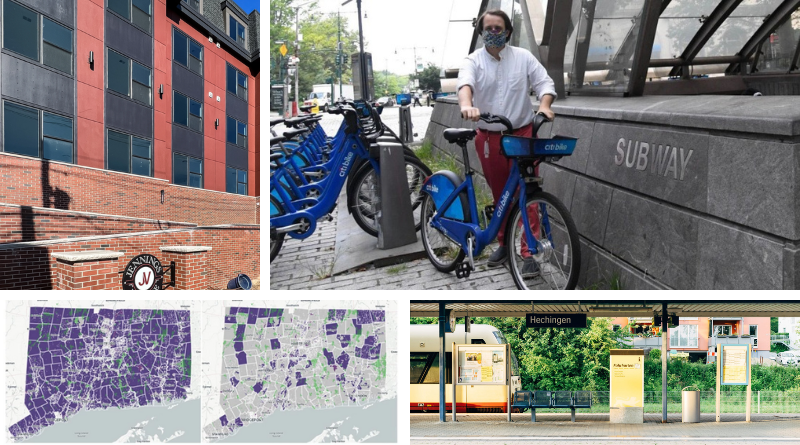 A team led by Sara Bronin, a professor at Cornell’s City and Regional Planning department, has developed an interactive map based on zoning codes collected from 169 municipal and 11 sub-municipal districts in Connecticut to show how housing is zoned in every jurisdiction. The project is also mapping such information for California, Hawaii, Massachusetts, Montana, New Hampshire, New York, and Ohio. Once state atlases are ready, Bronin plans to prepare a national zoning atlas that will guide researchers interested in understanding the impact of zoning on housing, education, environmental quality, climate change, transportation patterns, the economy, and government policies.

GEORGIA—MARTA Tries to Lure Customers Back Amid Pandemic
David Wickert, The Atlanta Journal-Constitution, June 1, 2022
With federal COVID-19 relief funds dwindling and ridership still below half of the pre-pandemic levels, MARTA is trying various strategies to attract commuters. A new on-demand service called MARTA Reach enables customers from selected neighborhoods to summon shuttles to travel within their community. MARTA has hired a consultant to guide its bus network’s most extensive redesign. The agency is also considering offering fewer routes overall, but more frequent service on key routes to bolster ridership. As a long term strategy, the agency has promoted transit-oriented commercial and residential development to replace underused parking lots at its rail stations.

WASHINGTON, D.C.—Justice Department Asks U.S. Appeals Court to Allow Transit Mask Mandate
Melissa Quinn, CBS News, June 1, 2022
The Justice Department called on a federal appeals court to reinstate the national mask mandate for public transit and airplanes after U.S. district judge Kathryn Kimball Mizelle of Tampa, Florida found the requirements to be unconstitutional in April. Justice Department lawyers argued that the findings in the CDC’s mask mandate “provide ample support for the agency’s determination that there was good cause to make the order effective without delay.” Additionally, the Justice Department lawyers asserted that the district court should not have preempted the recent ruling by another judge upholding the CDC’s transportation mask order or the similar pending cases.

TRENTON—Jennings Village: “For the People who Need Housing the Most”
Drew Mumich, Trentondaily, June 4, 2022
Trenton Mayor W. Reed Gusciora and other dignitaries announced Jennings Village, a mixed-use, affordable housing development. Located at 461-471 Brunswick Avenue, Jennings Village will offer 71 affordable units to residents with household incomes at 60 percent of the area’s median income or less. The building will feature a mix of 11 one-bedroom units, 42 two-bedroom units, and 19 three-bedroom units situated close to bus stops, schools, and restaurants. The City of Trenton has provided $800,000 of HOME Investment Partnership Program Funds for 11 units in the project to aid different low-income groups directly.

SOUTH AMBOY—$23.3 Million in Grants Pave Way for South Amboy Ferry Terminal
John Mooney, TAPintoRaritanBay, June 1, 2022
A long-anticipated ferry connection between South Amboy in Central Jersey and New York City reached a funding milestone of $23.3 million, as construction of the ferry terminal is expected to begin this summer. The new commuter mode aims to improve regional mobility and fit into a wider vision for the community. Further improvement to South Amboy’s waterfront is planned and includes an expanded waterfront plaza and walkway.

New Jersey Announces Funding for Safe Routes to School Program
Roads & Bridge, June 1, 2022
NJDOT announced 31 grants, totaling 19.6 million, for the state-wide Safe Routes to School Program designed to ensure the safety of children walking and biking to school. This funding, the largest amount ever awarded to the program, will support projects that improve safety and reduce traffic, fuel consumption, and air pollution near NJ schools.

‘Treated like Dogs:’ After NJ’s Silence on Housing Inequities, Advocates Offer Solutions
Kayla Canne, Asbury Park Press, June 1, 2022
A yearlong investigation by the Asbury Park Press into the New Jersey affordable housing crisis has identified multiple misdeeds and illegal actions by landlords in New Jersey. The solution to many of these issues may lie with the state using its existing powers.

ILLINOIS—Take a Ride: The Green Line and the Future of Equitable Transit in Chicago
Lucas Freitag, The Chicago Maroon, May 31, 2022
A look at the development of public transportation in Chicago and recent efforts to improve service and to provide transportation and development in more equitable ways. These efforts include a Fair Transit South Cook pilot program that looks to reverse declining ridership aboard Chicago’s famed “Loop” by reducing fares and increasing service across several commuter rail lines. Also in place is the City’s Equitable Transit-Oriented Development (eTOD) Pilot Program and growing bike-share facilities offered by firms such as Divvy. Through such commitments, Chicago hopes to build the post-pandemic infrastructure necessary to create a more equitably accessible urban core and provide consistent service to its most vulnerable transit riders.

WASHINGTON—New Approach to Fare Checking/Enforcement Moves Forward, Fare Ambassador Program Doubles
Rachelle Cunningham, Sound Transit, May 31, 2022
Sound Transit, which serves the greater Seattle area in Washington State, has announced its commitment to means-testing lower fares and easing its fare enforcement. Enrolled passengers within the OCRA LIFT Program with household income equal to or less than 200 percent of the federal poverty level will receive reduced fares. The Sound Transit Board is also expected to deliberate on providing free youth fares to both advance a more equitable transit agenda and address reductions in ridership.

NEW YORK—DOT Announces Multi-Agency Study to ‘Reimagine’ the Cross Bronx Expressway
Dave Colon, Streetblogs NYC, May 31, 2022
A multi-agency collaboration between NYCDOT, NYSDOT, the NYC Department of City Planning, and NYC Department of Health and Mental Hygiene has launched a study to investigate ways to make fundamental changes to the Cross Bronx Expressway. Within the wider context of the USDOT’s Reconnecting Communities grants, growing resources and vision for capping the expressway or otherwise minimizing its negative impacts are predicted to bear fruit in the form of small- and large-scale proposals by 2024.

WISCONSIN—Downtown Appleton Transit Center Could Be Replaced with Larger, Taller Mixed-Use Development
Duke Behnke, Appleton Post-Crescent, June 2, 2022
TOD can also occur in places outside of major cities and suburbs. Valley Transit of Wisconsin plans to redevelop their transit center into more than just a station. This transi t center sees 13 buses every hour, connecting the northern municipalities of Lake Winnebago. They envision retail and bus stations on the lower level with housing above.

CALIFORNIA—Legislating at the Intersection of Transportation and Housing Policy
David Barboza, Streetblogs California, May 31, 2022
The California State Assembly has pressed forward with two TOD-oriented bills: A.B. 2097, which would abolish parking minimums near notable transit stops, and A.B. 1778, which would prohibit state funds from widening highways in areas with high pollution and poverty. Together, these bills would reduce overinvestment in automobile infrastructure and help spur denser, more transit-focused uses of the state’s land and money.

CALIFORNIA—OPINION: Denser Housing at BART Stations is Climate-Smart
Dan Kammen & Charlie Koven, Berkeleyside, May 31, 2022
The City of Berkeley is currently engaged in the political process to determine what to do with surface parking lots that surround two BART stations: Ashby Station and North Berkeley Station. The authors of this piece argue that in order to help reduce the City’s climate impact, there should be large and dense development built around the rapid transit station.

MINNESOTA—How Important Was the Single-Family Zoning Ban in Minneapolis?
Jake Blumgart, Governing.com, May 26, 2022
In 2018, Minneapolis dropped single-family zoning (SFZ) as its base residential district. Now, the question is, what resulted from this change? The regulatory change caused a shift in the way the City looked at its land development policies. While the SFZ removal caught the headlines, it seems to have paved the way for other simple reforms as well. It also has created a desire to pursue rent regulations and environmental conservation.

CALIFORNIA—Metro-Adjacent Specific Plan Could Bring New Development to Compton
Steven Sharp, Urbanize, May 26, 2022
The Compton Station TOD Specific Plan, covering more than 570 acres around Compton Boulevard and Willowbrook Avenue, has entered the environmental review period. The plan focuses rezoning efforts on three downtown nodes: The Civic Center, anchored by MLK Memorial Plaza; the Commercial Core consisting of the Compton Renaissance Center and MLK Transit Plaza; and the Historic Core/Compton Boulevard East along Compton Boulevard from Alameda Street to Santa Fe Avenue. If adopted, the specific plan would result in the construction of at least 2,400 new homes, 140,000 sq. ft. of offices, and a 150-key hotel by 2024.

CALIFORNIA—Metro to Approve Early Phase of Union Station Run-Through Tracks Construction
Joe Linton, StreetsBlog LA, May 24, 2022
Link US, a much-needed project to upgrade Los Angeles’ Union Station to support Metrolink and Amtrak, is expected to be approved by the Metro board. According to estimates, Link US will increase Union Station capacity from 180 to 278 trains daily and reduce train dwell times from 20 to 5 minutes. The first phase of the project would build new bridge structures over and along the 101 Freeway and new rail tracks in and along a historic structure. The second phase would raise the main platform area, build new interior concourse areas, and add additional run-through tracks. The California High-Speed Rail Authority (CAHSRA) is providing $423 million to construct the additional run-through tracks that will benefit the planned high-speed rail.

GERMANY—Germans Snap Up Inflation-Busting Public Transit Tickets
Frank Jordans, Associated Press News, June 1, 2022
To combat rising fuel costs and promote public transit ridership, the German government has released monthly cross-country travel train tickets for less than $10. Over $7 million tickets have already been sold and an expected 30 million monthly users are expected to ride from June to August in a nation of roughly 80 million. The flat, affordable cost has reportedly proven the most useful for lower-income riders and families looking to travel within a country affected by a tight energy market.

CANADA—B.C. Invests More Than $2.4 Billion in Metro Vancouver Transit
Journal of Commerce, May 31, 2022
Responding to a drop in  ridership in the Vancouver metro area, the Canadian province of British Columbia has advanced more than $2.4 billion to enhance the City’s transit services to be more reliable and wide-reaching. The funding will also support Metro Vancouver Transit efforts to electrify their bus fleet and develop their bus infrastructure towards a more sustainable transportation mix.Payton Chung | Wikipedia

CANADA—Investment of Nearly $65 Million for the Creation of 169 Social and Affordable Housing Units in Montréal
Canada Mortgage and Housing Corporation, Cision, May 31, 2022
The governments of Canada and Quebec and the City of Montréal marked the groundbreaking of the Coopérative d’habitation laurentienne in Saint-Laurent, Montréal. The $65 million project will provide 169 social and affordable housing units for low-income groups. The building will be located near the future Bois-Franc station of the Réseau express métropolitain, in the Bois-Franc TOD area. The Société d’habitation du Québec (SHQ), contributing more than $11.1 million through its Rent Supplement program, will support 135 of the 165 tenants to ensure that they do not spend more than 25 percent of their income on housing.

SWEDEN—Challenges of Delivering TOD in Low-Density Contexts: The Swedish Experience of Barriers and Enablers
Robert Hrelja, Lina Olsson, Fredrik Pettersson-Löfstedt & Tom Rye, European Transport Research Review, May 23, 2022
The authors of the study conclude that TOD must be more than dense housing added near a train station. There must be coordination between the developers and the local government to make car trips less desirable and the TOD more integrated with the surroundings through both the design of the building and the streets that surround it.