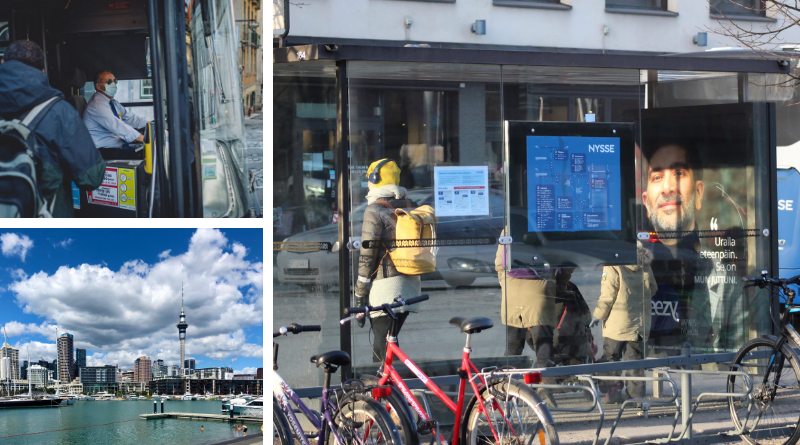 Fewer than one-fifth of the more than 122,000 bus stops served by the nation’s largest 16 transit agencies have shelters. According to Steven Higashide, Research Director at TransitCenter, the lack of bus shelters in American cities illustrates the nation’s disinterest in improving transit services used mainly by marginalized and low-income people. The $109 billion in transit funding from the infrastructure law offers a chance to make amends. Many large transit agencies are planning for more shelters as they redesign bus networks. For example, Houston recently celebrated the completion of 2,500 accessible stops after adopting a $414 million plan to revamp bus services and invest in bus shelters.

CALIFORNIA—San Jose Transit Workers Face Discipline for Lack of COVID Shots
Eli Wolfe, San Jose Spotlight, May 10, 2022
Following an April 29th deadline for compliance, the Santa Clara Valley Transportation Authority (VTA) informed about 50 workers who have not received a vaccination or an exemption that they potentially face termination. Most workers, about 90.5 percent of the agency’s 2,100 employees, are vaccinated, and 70 individuals received religious or medical exemptions, according to the agency’s latest report. Most workers who received a vaccine-related disciplinary letter are members of Amalgamated Transit Union (ATU) Local 265, which represents operators, mechanics, and other essential employees. VTA officials do not anticipate terminations will affect services.

NEW YORK—NYC Subway Ridership Hits Highest Level Since Start of COVID
Devin Gannon, 6sqft, May 10, 2022
Ridership aboard the New York City subway reached nearly 3.5 million riders on May 5, 2022. While still significantly lower than pre-pandemic levels—the 2019 weekday average of 5.5 million—this is a new pandemic-era record in NYC. In April 2020, ridership fell to a record low of about 300,000 trips per day. The agency has taken steps to improve ridership, such as launching a fare-capping pilot. Under the program, subway and bus riders who use the OMNY contactless payment system 12 times within a seven-day period will be automatically upgraded to an unlimited pass for the remainder of that week.

WASHINGTON—What Will Be The New Normal For Post-Covid Ridership?
Sherwin Lee, Seattle Transit Blog, May 4, 2022
While the nation strives to return to normal, expecting a “v-shaped” recovery for transit ridership is likely to be far-fetched and old benchmarks may be of limited use. Many variables previously used to project transit ridership are increasingly unreliable as commuters, who made up about half of pre-pandemic ridership, opt to continue full- or part-time work from home arrangements. When considering ridership, cities and transit agencies need to account for new housing, land use, and commuter patterns. With that in mind, transit systems are predicted to shift away from peak-only service and establish frequent all-day service and cross-regional connections.

JERSEY CITY—Renderings Revealed for Development on Jersey City’s Giles Avenue
Chris Fry, Jersey Digs, May 10, 2022
GN Management & Developers shared renderings for the development of several connected lots they own at 110-115 Giles Avenue. A 2019 feasibility study from the Port Authority of New York and New Jersey found it viable to build a new PATH station in the area. Recently, Jersey City Mayor Steven Fulop issued a statement in support of the proposed station. His statement suggested developers fund the construction of a two-platform, above-ground station, including minor modifications to the existing tracks. The Giles Avenue property is located adjacent to the PATH system’s track and about a block away from the site of the potential Marion PATH station. The developer has not released a timeline and no formal plan has been submitted to the City.

Change Coming to NJ’s Affordable Housing Rules?
Colleen O’Dea, NJ Spotlight News, May 3, 2022
Senator Paul Sarlo (D-Bergen), head of the New Jersey Senate budget committee, indicates that he is willing to seek a new way to allocate affordable housing in municipalities, changing the current methodology, a process formerly run by the defunct Council on Affordable Housing (COAH) and now administered by the state court system. Sarlo states that he supports a plan by Governor Phil Murphy to use COVID-19 relief money to finance 100 percent affordable developments throughout New Jersey but that he plans to add language to the budget, or introduce separate legislation, to change the process for determining the number and location of units.

NEW YORK—Monthly Fare-Capping Is the Ticket to More Equitable Fare Policy in NYC
TransitCenter, May 10, 2022
The MTA weekly fare-capping pilot through OMNY has made the rider experience more convenient and equitable, saving riders over $1 million in fares in its first month. Research suggests expanding the program to a 30-day fare-capping period could save riders using the card—about 4.4 percent of all regular subway riders—more than $2.5 million in fares each month. According to estimates, seven percent of subway riders from low-income tracts and six percent of subway riders from tracts where most residents are people of color will directly benefit. Experts say monthly fare-capping will promote equity as well as boost ridership by allowing riders to decide how to pay fares conveniently.

NEW YORK—State Bike Survey Shows Demand for Secure Parking at Transit Hubs
Dave Colon, StreetsBlogNYC, May 5, 2022
More than half of the 12,000+ respondents to the ongoing New York Bike Census stated they would pay for safe bike parking near transit stations.  Biking one- to three-miles may be a more feasible and efficient means to reach the nearest bus stop or subway stop in a lot of communities, however, many stations don’t have adequate parking. Providing secure bike parking facilities will promote biking and bolster confidence among bike riders. The MTA is taking small steps in this direction, such as installing an Oonee bike pod outside of Grand Central Terminal. New Jersey has plans for 30 bike pods, seven of which will open in 2022.

VIRGINIA—Construction Starts on 28-Story Apartment Building in Tysons
Michele Lerner, The Washington Post, May 11, 2022
Construction has begun on the Heming, a new 28-story mixed-use building that will be part of a 6.5 million-square-foot mixed-use development located across from the McLean Metro Station and between the Capital One and Mitre headquarters. Located at 1800 Chain Bridge Road in Tysons, the project will comprise 410 apartments, of which 82 are designated as affordable. The development will also include a three-level outdoor public plaza called the Levels connecting Chain Bridge Road, Platform Avenue, and the Metro Station. The development is expected to create a walkable neighborhood for residents, workers, and Metro riders.

CONNECTICUT—THE BRAKE: Why Sustainable Transportation Advocates Need to Talk About Zoning
Streetsblog, May 10, 2022
Transportation and land use go hand-in-hand when efforts are taken to improve walkability and reduce automobile congestion in a place. Cornell University law professor Sara Bronin, who is responsible for the Connecticut land use reform group, Desegregate CT, and the National Zoning Atlas, discusses with the Brake Podcast how sustainable transportation advocates need to do a deeper dive and help push for zoning reform to promote transit ridership and more sustainable outcomes.

CALIFORNIA—Livermore Council Paves Way for Condos in Isabel Neighborhood Specific Plan Area
Jeanita Lyman, Pleasanton Weekly, May 10, 2022
The City Council of Livermore approved the construction of a new development focused on sustainable energy and transit access. The 112-unit project will reserve 22 apartments for households of median incomes and 12 will be built as accessibility units for seniors and others with mobility limitations. Assistant planner Jake Potter emphasized the development’s sustainability measures and the area’s location along the bus line, which provides a transit link to downtown and other institutions and a connection to the BART line.

FLORIDA—How Miami Decided Parking Is More Important Than Housing
Henry Grabar, Slate, May 6, 2022
In March, Miami reinstated the City’s parking requirements, reversing a policy that supported a “boomlet” of missing middle housing—small buildings on small lots by small builders. The overturned measure, adopted in 2015, exempted developers of small buildings from building parking and a separate measure allowed parking-free development downtown. Once again, developers will be required to provide 1.5 parking spaces for each new Miami apartment. The decision has not been well received by local housing advocates who believe the change will reduce the number of housing units built and increase sprawl.

WASHINGTON—How Light Rail and Density Transformed Seattle’s Neighborhoods
John Talton, The Seattle Times, May 6, 2022
As Seattle added over 128,000 people between 2010 and 2020, many neighborhoods have witnessed a dramatic increase in density. The Link light rail system prompted high-density transit-oriented development around the amenity-rich Seattle Center in Uptown and neighborhoods such as Othello. The Link has also drastically reduced commute times between downtown and the University of Washington, further opening dense development opportunities. Although many perceive density as a means to lower housing prices, the fast rise in market-rate housing has sparked concerns about gentrification.

CANADA—Vancouver City Council Gearing Up for Consequential Broadway Plan Decision
Kenneth Chan, Daily Hive, May 14, 2022
After a four-year planning and public participation process, the Broadway Plan has reached the final stage for approval by the Vancouver City Council. The plan includes the City staff’s proposal for a 39-story rental housing, office, and retail skyscraper located over SkyTrain’s planned South Granville Station, as well as other transit-oriented construction. The area plan was triggered by SkyTrain’s Millennium Line Broadway Extension, which will add six subway stations by 2025 within a six sq. km. planning area. Considered to be highly consequential, the Broadway Plan, if approved, will guide future rezoning and development permit applications allowing 40,000 to 50,000 additional residents over the next 30 years.

NEW ZEALAND—Thousands Speak Up on Government’s Intensification Plans for Auckland
Matthew Scott, Newsroom, May 11, 2022
The National Policy Statement for Urban Development will remove consent barriers for taller buildings and high-density housing across the urban centers of Auckland. Once approved by the Auckland Council, the policy will allow for apartments of six stories or more within walking distance to metropolitan centers and around transit hubs. While the policy aims to address the shortage of housing supply and the high cost of living, some Auckland councilors believe the new policy will “damage the livability of the city for current and future Aucklanders.”

UNITED KINGDOM—The London Underground Stations Where TfL Are Building 20,000 Homes to Plug Financial Black Hole
Josiah Mortimer, MyLondon, May 11, 2022
Following best practices from Japan, Hong Kong, and Taiwan, Transport for London (TfL) has developed a commercial corporation responsible for developing its properties. The purpose is two-fold. First, the agency aims to generate additional revenue through leasing of its lands, funds that can be reinvested into transportation. Second, the development of property near transit facilities will help create a ridership base and will also increase  fare-box revenue for the agency.

NORWAY—Norway Wants People to Park Their EVs and Ride the Bus
Hazel Southwell, The Drive, May 5, 2022
Thanks to a host of incentives, electric vehicles (EVs) have come to dominate the Norwegian automobile market. However, the nation now recognizes that their use alone will not allow it to achieve its energy and environment goals. An EV is still a car that takes up space on roads, incurs manufacturing and maintenance costs, and requires energy to move it around.