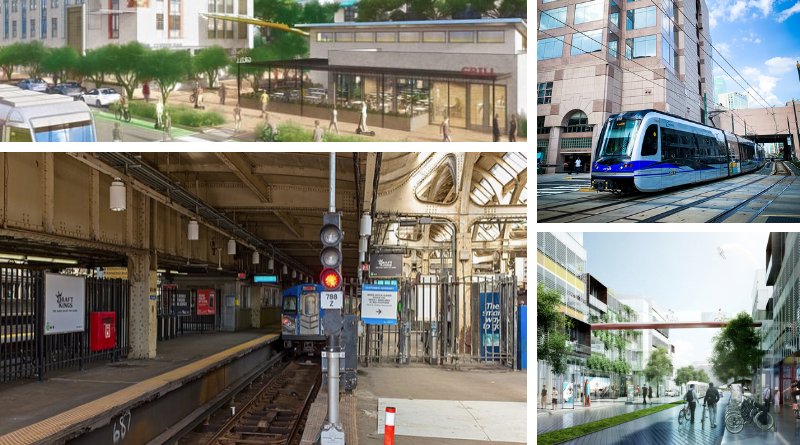 Looking to ‘Change the Environment’ Around Downtown Camden Transit Hub
Phaedra Trethan, Cherry Hill Courier-Post, November 15, 2019
At the start of November, Camden County Police increased security and patrols around the Walter Rand Transportation Center, where three major rail and bus lines converge in downtown Camden. Security is a main concern among riders and commuters who access the transit hub, and city officials and law enforcement agencies are working to ensure the safety and cleanliness of the station. Several non-profit agencies and local service organizations are also extending help and support for homeless people and others in need. The efforts to ‘change the environment’ around the transit hub have been met with positive feedback.

A PATH Train from NYC to Newark is the Best Option, Group Says, Even If It Costs $1.7B
Larry Higgs, NJ Advance Media for NJ.com, November 17, 2019
This week, the Regional Plan Association released a study on possible improvements to mass transit in New Jersey and New York City. The document recommends a proposed $1.7B PATH rail line extension from the New York World Trade Center to Newark Liberty Airport to improve access for both airport employees and travelers. The project’s cost estimate includes extending the line and renovation of station amenities to improve rider experience.

Autonomous Tech to Get a Try-Out in the Lincoln Tunnel
Politico.com, November 18, 2019
The Port Authority of New York and New Jersey released a draft resolution for a $5M project to implement the use of self-driving buses on the highway lane that connects New Jersey and midtown Manhattan. According to Port Authority spokesperson Benjamin Branham, the project might result in a bus-lane capacity increase of 30 percent (or 200 buses) during peak hours. The bi-state agency is consulting with partner agencies before bringing the proposal to a vote in December. New Jersey officials are considering creating more bus lanes to accommodate the needs of commuters who use the tunnels every day.

Transportation Plan for Ford Site Encourages Walking, Biking and Transit
James Walsh Star Tribune, November 16, 2019
This week, St. Paul City Council and residents will discuss a $92M redevelopment plan for a former Ford Motor Co. site. The 2040 plan envisions the 122-acre property as a 40-block urban village with thousands of new homes, offices, and retail space. The design addresses transportation needs through support for a variety of travel modes. City Council Member Chris Tolbert guarantees that the neighborhood plans will include Complete Streets and infrastructure that will accommodate cyclists, walkers, cars, and transit. Earlier this year, the City Council released a document called Alternative Urban Area-wide Review, increasing confidence that the Ford site can be designed to accommodate all the new residents, workers and customers.

Charlotte Approves Rezoning to Guide Development Near City’s Transit Centers
Danielle Chemtob, The Charlotte Observer, November 18, 2019
On Monday, the Charlotte City Council approved a petition to rezone in areas along the Blue Line and Silver Line. Despite a development boom in recent years, the city’s zoning codes have not been updated in more than two decades. Implementation of the new transit-oriented development regulations will govern designs and open space requirements of new developments to encourage affordable housing, walkability, and environmental sustainability.

The Suburban Office Park, an Aging Relic, Seeks a Comeback
Amanda Abrams, New York Times, November 19, 2019
North Carolina’s Research Triangle Park, the country’s largest corporate research park, is redeveloping a part of its 7,000-acre property after years of planning and delays. The suburban office park is adding restaurants, bars, shops, and apartments to attract younger office workers who favor urban work environments with good access to transit, entertainment, and retail over remote, bucolic areas. Research Triangle Park’s previous zoning ordinances that  restricted development to 30 percent of land area and prohibited retail and housing uses have been amended, and construction is set to break ground in 2020. Phase One of the commercial construction is expected to be complete by the end of 2022.

Tempe Apartments for Renters Without Cars are in the Works
Catherine Reagor and Paulina Pineda, Arizona Republic, November 19, 2019
Developers of Culdesac Tempe are designing the first parking-free residential apartment complex in the US. It will be built across from the Metro Phoenix Smith-Martin light rail station and residents of the 636 apartments will receive transit subsidies such as discounted passes and deals on ride-sharing services. Guest parking spaces and parking for the development’s commercial retail area will still be available. The complex is scheduled to open in fall 2020.

THAILAND — Thailand Hopes to Have Bullet Trains Running by 2023
David Luekens, CNN, November 17, 2019
With one project in construction and another one having just received approval, Thailand begins the development of its high-speed rail (HSR) network. Inspired by Japan and Singapore, the network will span the entirety of the country, connecting airports, major cities and regions. Though the Thai government declined loans from China, it employs Chinese high-speed rail technology. The project is part of the Belt and Road Initiative (BRI) to build transport infrastructure that connects China to the rest of Asia.

CANADA — Transit Subsidy Arranged for Future Residents in Four Metrotown Developments in Burnaby
Carlito Pablo, Georgia Straight, November 18, 2019
Developers of four multi-family residential projects in Burnaby, British Columbia are offering transit subsidies for renters and apartment owners to encourage the use of public transit. The four properties are located near Metrotown Station on the Expo Line of Metro Vancouver’s SkyTrain rapid transit line. The developers will offer residents discounted transit passes for two years or until these subsidy funds are exhausted.

AUSTRALIA — GOD Save Us: Greenspace-Oriented Development Could Make Higher Density Attractive
Julian Bolleter, Cristina E. Ramalho, Econotimes, November 19, 2019
In urban Australia, the Greenspace Oriented Development (GOD) movement brings a new spin to TOD concepts. Like TOD, GOD aims to increase density by creating multi-functional spaces and incorporates one of the most appealing parts of suburban living: proximity to nature. The movement encourages redesign and rezoning to build green, multi-use developments in dense urban areas. Because these upgraded spaces would operate as multifunctional, communal “backyard” areas for urbanites, GOD incentivizes residents to support well-designed infill developments and reduces the need for sprawl or the expansion of urbanized land.

May 25, 2005 Steph_Admin Comments Off on The New Transit Town: Best Practices in Transit-Oriented Development

What We Are Reading: July-August 2015

September 8, 2015 Stephanie DiPetrillo Comments Off on What We Are Reading: July-August 2015