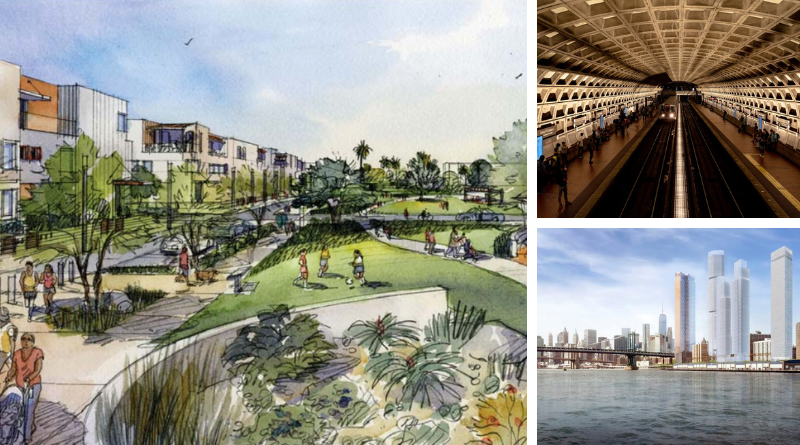 ILLINOIS—Chicago Launches Phase One of $10M Equitable Transit Programme
Smart Cities World, November 25, 2022
The City of Chicago has launched the first phase of its Equitable Transit-Oriented Development grant program. The $10M initiative, supported by American Rescue Plan Act funding and more than $600M in local bond funds, will finance a community-led equitable transit-oriented development (eTOD) near stations and high-frequency bus corridors. A first phase of the program invites organizations to provide technical assistance to community groups that will receive funding in 2023. The second phase of the program, to begin next month, will provide grants and technical assistance in support of dense, mixed-use, pedestrian-oriented development enabled by the Connected Communities Ordinance approved by the City Council in July.

DISTRICT OF COLUMBIA—Groundbreaking Legislation May Boost Transit Ridership in D.C.
Tom Hucker, Natural Resources Defense Council, November 23, 2022
While workers have begun to return to offices, transit ridership has been slow to recover to pre-pandemic levels. D.C. Councilmember Charles Allen and colleagues have proposed a bill that could promote more use of public transportation. The bill, if passed, would provide each D.C. resident $100 per month to ride bus or rail in the Washington Metro system. The Metro for D.C. Amendment Act would also add $10 million annually to a new Transit Equity Fund to improve reliability and service for riders in historically underserved neighborhoods.

LOUISIANA—Getting Passengers Back On-Board: New Orleans RTA’s Road to Recovery
Alex Z. Wiggins, Intelligent Transport, November 21, 2022
Alex Z. Wiggins, CEO of the New Orleans Regional Transit Authority (RTA), discusses challenges faced during the COVID-19 pandemic and the measures taken to address them. By listening to their customers, the RTA has focused on reducing wait times, providing better access to employment, educational and shopping centers, and making investments in basic amenities such as bus shelters. The authority also looked at equity as a key performance indicator, focusing on race, economic status and gender to improve mobility.

CALIFORNIA—Metro to Fully Restore Transit Service December 11
Joe Linton, StreetsBlog LA, November 21, 2022
LA Metro plans to restore services to pre-pandemic levels on December 11. The decision reverses service reductions made in response to reduced ridership and reflects increased staffing of bus operators. The agency board had mandated and funded service restoration in July 2021, but a bus operator shortage foiled this effort. In August 2022, the agency approved raising bus operator salaries and recruiting efforts have improved. In October 2022, overall Metro weekday ridership rose to just above 870,000, or about 73 percent of pre-pandemic ridership.

City’s Economy May Get Boost from Glassboro-Camden Light Rail
Neill Borowski, TAPintoCamden, November 25, 2022
According to John T. Hanson, CEO of the Delaware River Port Authority (DRPA), communities that welcome the new Glassboro-Camden Light Rail line (GCL) with stations and other support may see an economic dividend to their downtowns, as has happened with other new transit services. Work on the GCL have advanced to the engineering and design phase. If construction of the line takes about three years to complete, as anticipated, passengers will be able to take the 40-minute trip from Glassboro to the Walter Rand Transportation Center in Camden in early 2028. The GCL will operate on its own dedicated track that is partly on the existing Conrail right of way.

BOUND BROOK—Denholtz, Redwood JV Plan Luxury New Jersey Development
Gail Kalinoski, Multi-Housing News, November 23, 2022
Denholtz Properties and Redwood Real Estate Group plan to begin construction of The Rail at Bound Brook by the end of 2022. Expected completion of the 143-unit project is estimated for the second quarter of 2024. The Rail at Bound Brook will be located 600 feet from the Bound Brook Station, which provides service on the NJ TRANSIT Raritan Valley Line. Bound Brook was designated as a New Jersey Transit Village in 2003 by the NJ Department of Transportation’s Transit Village Initiative. In 2016, the U.S. Army Corps of Engineers completed a $143 million flood control project in the community. Bound Brook has also received $2.2M as part of a federal earmark for the creation of a one-block pedestrian plaza between the station and the planned entrance of The Rail at Bound Brook.

BAYONNE—Bayonne City Council Acts to Increase Parking for New Development
Al Sullivan, TAPintoBayonne, November 20, 2022
The Bayonne City Council recently adopted an ordinance that requires minimum parking for new residential, commercial, and industrial development, including for additions to existing houses and other properties. The ordinance calls for one off-street parking space for each one-bedroom housing unit, one and a quarter spaces for two-bedroom units, and one and a half spaces for three-bedroom units and requires one parking space per employee or for every 1,000 square feet of industrial space. The ordinance eliminates the ability of new residents to pay a one-time fee to the city in order to avoid providing parking when there is an addition to a residence.

ARIZONA—How the Edison-Eastlake Community in Phoenix Is Being Revitalized
Lauren Bly, AZBigMedia, November 23, 2022
In 2018, the U.S. Department of Housing and Urban Development (US HUD) awarded the City of Phoenix a $30 million Choice Neighborhoods Implementation Grant to advance its Edison-Eastlake One Vision Plan. The plan for the neighborhood, located one mile east of downtown Phoenix, calls for the construction of a total of 1,161 units, replacing 577 existing units in three severely distressed public housing developments, representing the largest concentration of public housing in the state. The plan aims to capitalize on transit-oriented development opportunities, deconcentrate poverty, and ensure long-term housing affordability.

CALIFORNIA—The North County Transit District Is Becoming a Developer
Tigist Layne, Voice of San Diego, November 22, 2022
The North County Transit District (NCTD), operating in northern San Diego County, is seeking developers to build mixed-use projects with market-rate housing, affordable housing, and commercial spaces on underutilized and empty land adjacent to up to 12 stations. This effort advances multiple goals for the agency including the creation of long-term revenue, the provision of affordable housing to a region where it is undersupplied, and the expansion of transit ridership to reduce greenhouse gas emissions. In 2016, the agency’s board approved a policy to develop housing, commercial properties, office spaces, and other uses on underutilized surface parking lots.

NEW YORK—What is ‘Green’ Development?
Julianne Cuba, Streetsblog, November 22, 2022
Environmental protection or new housing? This is the conflict invoked by a recent lawsuit to stop development of the Two Bridges mega-project that would add 2,775 housing units, 25 percent of which would be affordable, to New York City’s Lower East Side and Chinatown neighborhoods. The project, which has been held up by various legal proceedings for the past six years, now faces a legal challenge arguing that the project would infringe on the right to clean air and water in a low-income community of color. The claim is based on a constitutional amendment passed in 2021, New York Proposal 2 / Environmental Rights Amendment, or the Green Amendment. Drafters of the measure state that it was not intended to be applied to housing projects.

TEXAS—‘Micro-Housing’ Project at Sixth and Chicon Tops Out in East Austin
James Rambin, Towers, November 21, 2022
Utilizing density permissions offered by its location in a Transit-Oriented Development District, Austin-based developers Watershed Development Group are building a 60-unit “micro-housing” apartment project. Units will range from 252 to 465 sq. ft., with an average unit size of 355 sq. ft. The six-story structure will occupy a space comparable to that of two single-family residences, and offer only 20 parking spots. The project is 0.3 miles from the Plaza Saltillo Station and less than 500 feet from a bus stop.

INDIA—Bengaluru Will Have Operational Namma Metro Network of 175 KM by June 2025, Says BMRCL MD
The Hindu, November 18, 2022
The City of Bengaluru (Bangalore) plans to dramatically increase its operational Metro network by 2023 to match pace with the country’s rapid urbanization. Officials state that the integration of a multi-modal transportation system remains a critical aim, as they construct a public transit network that competes personal vehicles. Transit-oriented development, the introduction of a multi-payment mobility card, bike taxis, and carpooling operations are being explored as potential improvements to build off these expanded rail investments.

CANADA—STM Announces New Elevators at Pie-IX and Villa-Maria Stations
Mass Transit, November 21, 2022
The installation of elevators at Montreal’s Pie-IX and Villa-Maria Stations have advanced transportation access for residents with disabilities. The authority behind the upgrades, Société de Transport de Montréal (STM), notes that 40 remaining stations will have to be improved to make the whole network accessible. Nonetheless, the progress made at these two stations illustrates not only the possibility of improvements, but also how such improvements benefit riders without disabilities as well.