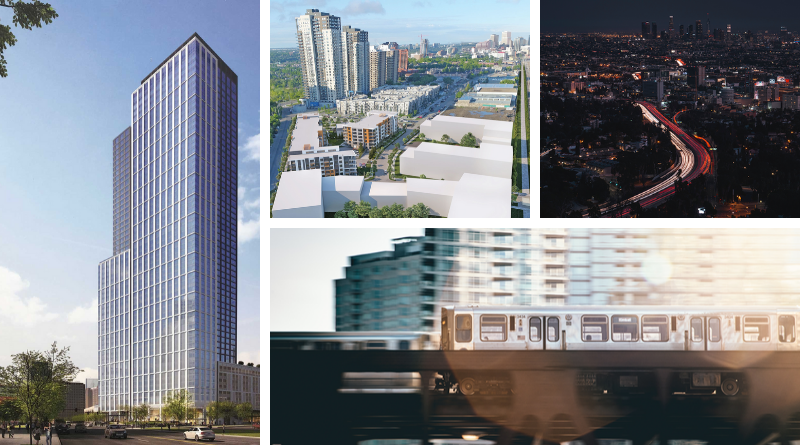 Oradell Mixed-use Redevelopment Denied Due to Parking Concerns
Stephanie Noda, NorthJersey.com, November 19, 2019
On Monday, the Oradell Zoning Board denied project plans to build a two-story, 11,000-square-foot mixed-use building at the site of a former American Automobile Association building, citing concerns about inadequate parking. The developer, 505 Kinderkamack Road LLC, intends to provide rental options geared toward millennials and baby boomers, but did not provide information on the number of employees and their parking needs in the planned commercial space. The site is located 0.3 miles from the Oradell Station on NJ TRANSIT’s Pascack Valley Line.

25 Columbus Dubbed ‘The Charlotte’ Under New Developer, Starts Rising in Jersey City
Chris Fry, Jersey Digs, November 25, 2019
After five years of property turnovers and redesign, construction has begun on The Charlotte, a 57-story mixed-use development in downtown Jersey City. The building will comprise 750 rental apartments, 37 of which will be designated affordable units for moderate-income renters. Developers will also be building 17,000 square feet of retail space, 471 parking spaces, and a 36,000-square-foot elementary school. Upon completion, Roseland Residential Trust, the owners of the development rights to the land, will deed the parcel of land to Jersey City for $1. The site is located 0.2 miles from the Grove Street PATH Station.

NJ Transit’s First New Station in Years Risks Adding Congestion
Crain’s New York, November 26, 2019
Weeks after the announcement of NJ TRANSIT’s plans to build a station in North Brunswick, critics weigh in on the possible pitfalls of the project’s ambitious plans. While the aim of the station is to reduce congestion along traffic-clogged Route 1, skeptics say that the plans could worsen Northeast Corridor logjams at the New Brunswick track crossing. NJ TRANSIT has chosen the Middlesex County Improvement Authority to build the station. The site of the future station is proximate to Main Street North Brunswick, a mixed-use redevelopment of a former Johnson & Johnson property, that began construction in 2016 and already includes a Costco, Target, restaurants, a hotel, and the first phase of a total 1,875 planned housing units. The groundbreaking for the station is targeted for 2021.

How Transit-Oriented Development Can Help Transform Struggling Urban Cores in Massachusetts’ Gateway Cities
Aviva Luttrell, MassLive.com, November 20, 2019
Several Massachusetts cities have taken on transformative transit-oriented development projects to revitalize areas that have struggled with decades of divestment. Christopher Coes, Vice President of the nonprofit Smart Growth America, believes that Massachusetts gateway cities “have all the right ingredients” to achieve housing and development reform. Steps to achieve this include changing zoning regulations, engaging with local institutions and actively involving residents in community events, and creating opportunity zones and transit-oriented development funds that would incentivize this type of development across the state.

Tarrytown’s New Transit-Oriented Mixed-Use Development Seeks Village Approval
Bill Cary, Westchester Magazine, November 21, 2019
Developers await approval of a project in Tarrytown, NY pending resolution of a leasing agreement with the Metropolitan Transportation Authority (MTA) and village planning board authorization. The project is located near one of the most popular stops on the Hudson Line, the Tarrytown Metro-North Station. Lexington 202 Group LLC must finalize a lease with the MTA, who owns a portion of the land slated for use by the proposed mixed-use development, before construction can proceed. The developer will renovate an old warehouse, transforming the structure into a self-storage and retail space with three stories of residential units. Once the planning board gives final approval, the project is expected to take 18 months to complete.

Is It Time to Take Highways Out of Cities?
Adam Millsap, Forbes.com, November 21, 2019
More than 50 years after the development of the Interstate Highway System, some are questioning the utility and the economic benefits that highways bring to American cities. Urban economists Taylor Jaworski, Carl T. Kitchens, and Sergey Nagai conclude that while the overall system provides a convenient way to travel between metro areas and states, some highways may bring more negative impacts that benefits to the cities that contain them. Similarly, a recent report by the Congress for New Urbanism, ‘Freeways with Futures,’ highlights portions of the highway system that could be removed without causing adverse effects on the overall system and may even boost a city’s revitalization efforts.

With Rail Almost Ready to Roll, Kapolei Wonders How Much Development is Too Much
Ben Gutierrez, Hawaii News Now, November 21, 2019
Kapolei City faces challenges to adapting their transit-oriented development plan a decade after first adopted. With a train station and several high-rise buildings underway, residents are appealing to developers and the city planning board to reevaluate the types of infrastructure and investments coming to Kapolei. Some Hawaiian locals have questioned the development of 20-story buildings near the new station and have cited a need for affordable housing and education as investment priorities.

Is transit-oriented development finally ready to take off on Chicago’s South Side?
Jay Koziarz, Curbed Chicago, November 25, 2019
After Chicago’s decision to expand its TOD Ordinance, more and more housing investments continue to pour into the city’s affluent North Side, leaving transit-proximate properties in the South Side mostly vacant. One Bronzeville development may jumpstart equitable investment on the South Side. P3 Markets and the Habitat Co. have proposed plans for an 8-story, 91-unit apartment building with 22 parking spaces to be constructed near the 43rd Street Station on the Green Line. To support efforts to minimize negative effects of gentrification, half of the planned apartments will be income-restricted, affordable-rate units. The developers hope to break ground in 2022.

CANADA – Developers Thinking Bigger to Catch Alberta’s Fresh Momentum
WI Staff, Western Investor. November 26, 2019
Two massive construction projects in Calgary and Edmonton, Alberta are expected to rise in 2021. In Calgary, developers plan a C$4.5B mixed-use development in three parts: Taza Park, Taza Crossing, and Taza Exchange. In Edmonton, Rohit Land Development, Brookfield Residential, and the City of Edmonton will invest C$30M to transform the city’s old rail yards into the Stadium Yards, a mixed-use urban village. A C$12M pedestrian crossing and pathway will link the site to the Commonwealth Stadium and the Stadium transit station. Plans include low-rise housing and 7,500 square feet of commercial and retail space. Partial completion is set for summer 2020.

May 17, 2006 Steph_Admin Comments Off on A "New Town" TOD in Connecticut: The Gilbert & Bennett Wire Mill Redevelopment Project