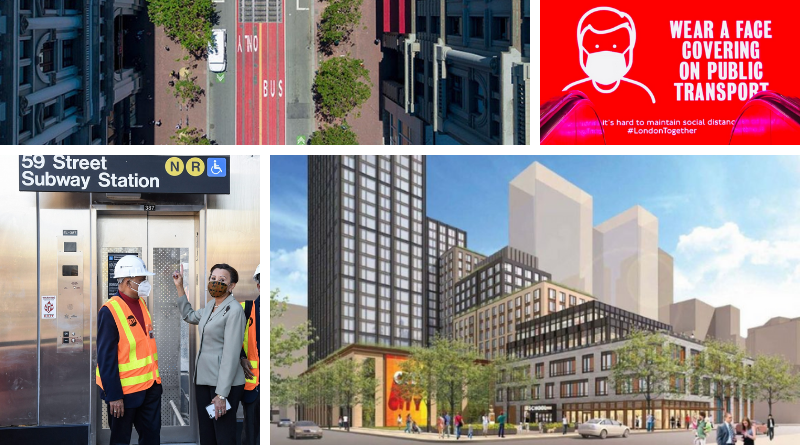 A recent rental market study projects a shortage of up to 200,000 rental units in the Toronto and greater Hamilton area within the next decade—though this demand may be affected by the pandemic, immigration, and employment trends. The study, 2019 Ontario Rental Market Study: Revisiting the Supply Gap & Opportunities for Development, was prepared by Urbanation Inc. for the Federation of Rental-housing Providers of Ontario.

To help meet this gap, 950 infill sites that have been purchased and zoned for rentals could support 176,000 new units. These infill sites are attractive for two reasons. First, many of the sites lie outside the downtown core in relatively affordable areas. Second, and perhaps most importantly, about 35 percent of the potential units to be built on these sites would be located with 800 meters of a current or future transit station.

NEW YORK—Here’s How MTA Riders Did Since the Mask Fine Went Into Effect Nearly Two Months Ago
NBC New York, November 11, 2020
Governor Andrew Cuomo’s mask mandate for riders aboard MTA trains has been highly successful, with most following the rule. Mask compliance has been at 96 percent on buses, 90 percent on subways, and over 90 percent on Metro North and Long Island Rail Road trains. Part of this rule’s rationale is to convince people that it is safe to travel on public transit and to reduce the influx of vehicular traffic into New York City. Since September 14th, the MTA has distributed free masks in addition to ensuring compliance with the new rule. This mandate has been enforced jointly by NYPD, MTA police, BTL officers, and bridge and tunnel officers.

CALIFORNIA—Here’s Why Traffic Is Back, Why Public Transit Ridership Remains Low Amid COVID-19
Erin Rode, Ventura County Star, November 12, 2020
The Southern California region has seen an impressive bounce back in vehicle miles traveled after an initial drop in April, but the same cannot be said about public transit ridership. UCLA’s Brian Taylor attributes this fall in numbers to safety concerns among transit riders and an increase in the number of people working from home. To keep pace with these changes, transit agencies have reduced bus service, but the challenge is to strike the perfect balance to ensure that demand is met and riders feel safe on the systems. Taylor emphasizes that the pandemic may have brought out the ‘social service’ function of public transit, with most current transit riders being lower-income people of color. Although bringing back ‘choice riders’ will contribute immensely to increasing ridership numbers, the focus now is on continuing to provide service to those riders who may not have other transportation options.

UTAH—Pandemic Puts Kink in UTA Experiment to Offer Free Rides for Low-Income People
Lee Davidson, The Salt Lake Tribune, November 12, 2020
COVID-19 has derailed Utah Transit Authority’s pilot project to provide free bus and train passes to low-income residents. As a result of the pandemic, most of the transit agency’s 51 partners reported low demand and financial struggles, and hence, an inability to assist with the program. UTA Board Chairman Carlton Christensen pointed out that the cost of transportation is a common roadblock to success for vulnerable communities. The UTA Board anticipates that the program will grow once the pandemic ends, and may in time be made permanent.

UNITED KINGDOM—UK Confidence in Public Transport Hits Lowest Level in 20 Years
Christopher Carey, Cities Today, November 9, 2020
The coronavirus pandemic has fueled an inclination towards car use over public transport among UK residents. Per the latest Department for Transport data, car use has returned to 90 percent of pre-pandemic levels, but rail and bus usage remain at 30 and 60 percent, respectively. In its annual Report on Motoring, the automotive services group RAC reported that 54 percent of the people surveyed believed cars to be safer than public transit during the pandemic, and 52 percent stated they will use public transit less in the future because of the pandemic. These troubling statistics concern transit authorities, which have faced massive reductions in revenue since the beginning of the pandemic. This situation arises despite an American Public Transportation Authority (APTA) study concluding that there is no direct correlation between public transit use and COVID-19 spread globally so long as people wear masks and trains and buses are well-ventilated.

Second Wave Presents Difficult Choices
Kevin Smith, International Railway Journal, November 2, 2020
Passenger railways worldwide have found themselves amid financial flux due to the coronavirus pandemic’s ongoing threat. Many have received financial help from governments, while others have been left to fend for themselves. In the US, Amtrak requested an additional $4.875 billion from the federal government after earlier receiving $1.5 billion. European nations face a similar challenge. Railways in Austria, Germany, and the UK are considering service and job cuts despite monetary assistance from their respective governments. The recent presidential election in the US promises to chart new territory for public transit agencies in the country, with ambitious plans at the federal level for transit infrastructure and several states passing transit-related ballot measures. Although passengers are unlikely to return to previous behavior patterns after the pandemic subsides, experts expect demand for railways to remain. The challenge is for rail operators and government officials to openly discuss ways forward on the other side of the pandemic.

Jersey City Council Approves Redevelopment Plan
Marilyn Baer, Hudson Reporter, November 13, 2020
On November 12th, Jersey City’s City Council approved the Laurel Saddlewood Redevelopment Plan in a 7-1 vote. The plan allows the 50-story Laurel and Saddlewood Court project—which will include a total of 807 affordable and market-rate residential units, a 12,000 sq. ft. public park, and a new public school—to move forward. The site is less than a quarter mile from the Harsimus Cove Light Rail Station on the Hudson Bergen Light Rail and less than a quarter mile from the Grove Street PATH Station. This project will be the third development under Mayor Steven M. Fulop to include a public school at the developers’ expense and with no cost to taxpayers. In addition to the 50,000 sq. ft. pre-K to fifth grade public school, developers Lennar Multifamily Construction will construct 5 percent of the project’s units (41 units) as workforce housing. City residents and officials look forward to the positive impact of a new public school on easing congestion in the district’s schools.

Plainfield: Mixed-Use Building with Grocery Story, Apartments Coming Downtown
Bob Makin, My Central Jersey, November 7, 2020
The City of Plainfield has recently seen a wave of newly approved transit-oriented development projects. Among these projects is a $2.65 million five-story multi-use structure in the Central Business District in the city’s Transit-Oriented Development Downtown Zone. The project will include a grocery store and 12 apartment units. The project will be joined by an additional 12-unit apartment building project in the Transit-Oriented Development Netherwood Zone. Plainfield’s Economic Development Director, Valerie Jackson, notes that the new mixed-use developments contribute to the city’s objective to increase density around the city’s train stations.

NEW YORK—MTA Unveils New Fully Accessible Station in Brooklyn
MTA Press Releases, November 9, 2020
The Metropolitan Transportation Authority (MTA) announced the addition of three new ADA accessible elevators to the 59th Street subway station in Brooklyn. The project also involved new stairs at the Sunset Park subway station, a new public address speaker system, and new fire alarms, among other upgrades. The completion of this plan comes amidst a difficult financial time for the MTA when the only capital investments possible are those that are funded under very limited circumstances. The work is part of a larger effort within the agency to accelerate the timeline for completing projects by taking advantage of low ridership numbers. The move to increase accessibility to the 59th Street station received messages of appreciation from stakeholders across different agencies.

ILLINOIS—Harlem Station Development Controversy Highlights Barriers to Creating Equitable TOD
Courtney Cobbs, Streets Blog Chicago, November 9, 2020
The Norwood Park Historical Society recently opposed car-centric development near the Harlem Blue Line Station. The group is concerned that the new proposed uses will be incompatible with the neighborhood’s current character, and will increase traffic and related hazards in the area. Chicago’s transit-oriented development waives car-centric developments on pedestrian streets (“P-streets”) but does not disallow such development on other types of streets. Moreover, the lack of ordinances requiring the creation of on-site affordable housing units may be a missed opportunity in some areas. Cobbs believes that an overhaul of Chicago’s TOD policies with a new focus on equity may help ease some of the concerns that the present ordinance may not address.

Reimagining the Street: How Bus Lanes Speed Up the Morning Commute and Why It Matters
Henry Hintermeister, ConnPIRG, November 9, 2020
Perpetually seen as the less glamorous option among transit modes, America’s buses offer a strong strategy for addressing climate change, improving air quality, and making cities more livable. Despite this, U.S. bus ridership has declined by 17 percent over the last 30 years. Reasons abound, including slow service and poor reliability, relatively low gas prices and cheap auto loans, negative perceptions of buses, and the rise of ride sharing. One way to overcome at least some of these perceived barriers is to improve service and reliability through the use of dedicated bus lanes—a strategy being advanced by several major cities including Denver, Los Angeles, New York, San Francisco, and Seattle. 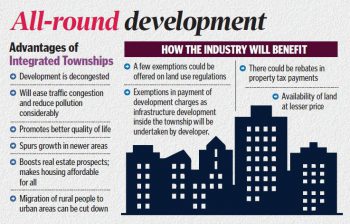 INDIA—Integrated Township Policy to Decongest Hyderabad
S. Sandeep Kumar, Telangana Today, November 13, 2020
Hyderabad’s state government has approved an Integrated Township Policy based on the ‘Walk to Work’ idea. The plan aims to decongest growth in the city of Hyderabad and spur development in new areas—while boosting quality of life and real estate values across the state. The government seeks to incentivize developers to create more satellite towns and counter magnets outside of the city to optimize land use, promote transit-oriented development, achieve economies of scale, and improve housing and infrastructure facilities. Gujarat and Maharashtra are the only two states in India to have adopted a similar strategy previously.

CANADA—City of Vancouver Considering Taller Buildings for Area around Marine Drive Station
Kenneth Chan, Vancouver Urbanized, November 9, 2020
The City of Vancouver is currently drafting new guidelines to incorporate added density and height for the area of Marine Landing near SkyTrain’s Marine Drive Station in South Vancouver. City officials expect these changes to allow additional social housing and employment spaces. The city plans to finish its initial area analysis this fall; the analysis will focus on public realm improvements, urban design guidelines, and public amenity needs. Currently, the Marpole Community Plan allows a “modest” height increase when developments include social housing. City staff aim to go beyond this modest increase with its revised height limits. The City Council approved a broader analysis of the area due to its expectation that property owners in the area will express more interest in developing in the TOD zone with the new height limits. Beyond the immediate Marine Landing area, TransLink plans to build a new bus operations and maintenance depot to serve up to 300 electric buses.