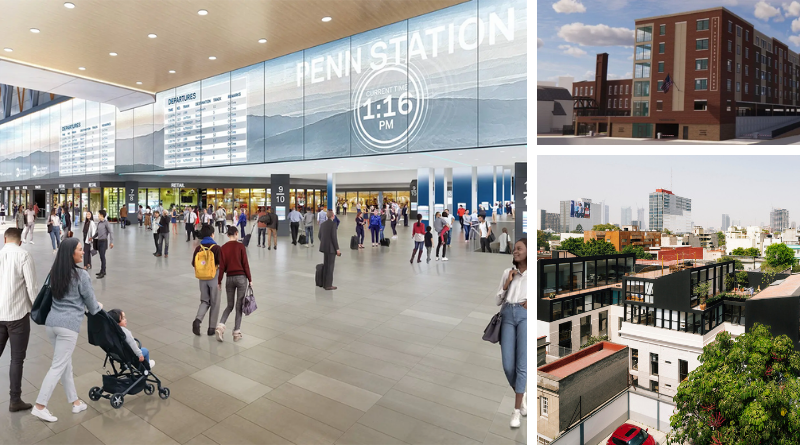 An 80-story World Trade Center development on public land has drawn criticism from advocates over its affordable housing allocation. Currently, 300 of the 1,200 apartments, 25 percent, would be affordable, but some nearby residents and elected officials argue that it is an opportunity to create deep affordability in a prominent location. According to the developers, each unit in the building costs $1 million to construct, and such a move would require an additional $500 million in government funding.

ILLINOIS—CTA, Pace, and Metra are Fighting over Federal COVID Stimulus Funding Split
Igor Studenkov, Streetsblog Chicago, November 5, 2021
The availability of additional federal funding has heightened tensions between Chicago’s three transit providers—the Chicago Transit Authority (mass transit), Pace (regional bus), and Metra (commuter rail). Early this fall, the Regional Transportation Authority agreed to provide sufficient funds to CTA and Metra through 2022 but to defer final decisions on other allocations. However, in September, the Federal Transportation Administration announced availability of additional American Rescue Plan (ARP) funding with conditions that included full allocation of previous stimulus support. Now Pace and Metra, which had been temporarily assigned 4 and 36 percent of the funding respectively, are fighting for additional funds before these decisions are made final.

It Could Take Nearly a Decade for Public Transit to Return to Pre-Pandemic Levels
Marco Quiroz-Gutierrez, Fortune, November 2, 2021
While many industries have been affected by the COVID-19 pandemic, its effects on public transportation and ridership were dramatic and are likely to remain long-lasting. According to the American Public Transportation Association, ridership has returned to only about 62 percent of pre-pandemic levels as of late October. Transit agencies have utilized emergency relief to offset declines in rider-based revenues; those funds continue to support agencies with day-to-day operations. Though vaccination rates and transit ridership continue to grow, forecasters suggest that depressed ridership will mean that transit agencies will need to address budget shortfalls.

NEW JERSEY—NJ Transit Should Get $3.6B in Federal Aid, But N.Y. is Holding it Up
Larry Higgs, NJ.com, November 1, 2021
A dispute between New Jersey, Connecticut, and New York continues over $3.6 billion in federal COVID-19 relief funds. Rather than following an established federal formula, New York has argued that it should receive an additional $637 million, which would be taken from New Jersey’s and Connecticut’s shares. The so-called “nuclear option” in the event of a prolonged disagreement would involve Governor Phil Murphy vetoing the minutes of the Port Authority of New York and New Jersey’s board meetings, effectively halting the agency’s business that month.

ELIZABETH—Seven-Building Residential, Retail, and Office Complex Planned for Elizabeth
Jared Kofsky, Jersey Digs, November 3, 2021
Baker Center Holdings, LLC has applied to construct a mixed-use complex between Newark Avenue and the Northeast Corridor in Elizabeth. At full build-out, the project would include 632 housing units, 32,750 sq. ft. of office space, a park, 1,272 parking spaces, and room for retail. Residents of the seven-building complex would be able to take advantage of the nearby North Elizabeth Station.

PATERSON—WinnCo Begins Work on Unique $26M Mixed Use Project in NJ
Boston Real Estate Times, November 3, 2021
WinnDevelopment began work on the Argus Ellison development, a mixed-use, affordable housing project in Paterson’s Great Falls Historic District. The revitalization of the Argus mill building will include the construction of 74 affordable housing units, a new parking deck, and space for the local non-profit Grandparents Relatives Care Resource Center. The project was financed by a considerable list of public and private partners, including the New Jersey Housing & Mortgage Finance Agency, Citi, Bank of America, New Jersey Community Capital, the Paterson Housing Authority, and others. The project is within walking distance of both the NJ TRANSIT Broadway Bus Terminal and Paterson Station.

CALIFORNIA—LA Seeks Incentives to Build Affordable Housing in Areas with More Parks, Transit, Grocery Stores
Margaret Shuttleworth, Los Angeles Daily News, October 27, 2021
The Los Angeles City Council unanimously voted to work towards prioritizing 100 percent affordable housing developments in areas with access to schools, grocery stores, healthcare, parks, and public transportation. A report from the L.A. Department of City Planning and Housing Development found that only 14 percent of affordable housing units built in the city over the last decade are located in high-resource neighborhoods. In 30 days, the Department of City Planning must provide a report on options for implementing an Affordable Housing Overlay Zone that will include a “bundle of development incentives to increase the supply of affordable housing.”

NEW YORK—With Cuomo Gone, Hochul Revises Plan for Penn Station
Matthew Haag and Patrick McGeehan, The New York Times, November 3, 2021
An updated plan to redevelop Penn Station was released by New York Governor Kathy Hochul. Previously, former Governor Cuomo’s plan had involved developing towers in the immediate vicinity, updating and expanding the station’s concourses, and adding new capacity to the station below. Hochul’s revised plan eliminates the track capacity expansion, keeping the adjacent development as a strategy to pay for New York’s portion of the station’s upgrades, which will include redesigning the hub to increase light and circulation space for travelers. New York expects to pay 25 percent for this work, splitting half the cost with New Jersey, with the federal government covering the remaining 50 percent.

GEORGIA—Density Bonuses Designed to Encourage the “Missing Middle” Housing in Atlanta Neighborhoods
Anita Archambeau, What Now Atlanta, October 29, 2021
The Atlanta Zoning Review Board is considering amendments that would incentivize missing-middle housing in MR-MU zones, as well as specific rezoning to MR-MU for some parcels near MARTA stations. The new MR-MU designation would allow up to 12 units on properties of at least 2,000 sq. ft., and require that two of the units be rented at affordable prices for at least 20 years or sold as affordable units. The City’s goal is to increase the variety of housing stock in supply, particularly in areas near transit.

MEXICO—Refurbishment, Adaptive Reuse and Extension of Apartments in Mexico
Mónica Arellano, Arch Daily, November 5, 2021
Examples of architectural practice in Mexico demonstrate contemporary efforts to grow residential capacity efficiently through refurbishment and adaptive reuse, while considering a space’s original context. The ReUrbano, or urban recycling, initiative in Mexico City’s la Roma neighborhood is one example. For their Cordoba-ReUrbano Housing Building, architecture firm Cadaval & Solá Morales worked to incorporate new housing units on top of an existing historic brick structure. In another example, the María Ribera Dwellings resulted from the repurposing of an old chocolate factory, retaining much of the original structure. 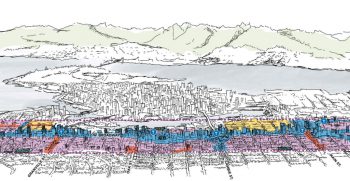 CANADA—Vancouver’s Broadway Plan Densification Adds 50,000 Residents and 42,000 Jobs
Kenneth Chan, Urbanized Vancouver, November 4, 2021
According to the in-development Broadway Plan from the City of Vancouver, the Central Broadway corridor is targeted for densification, with the addition of up to 30,000 housing units. Tall buildings of between 30 and 40 stories will be permitted in transit station areas. Some smaller-scale areas will be classified as “villages” and upzoned to allow heights of four to six stories and will require ground-level commercial uses for new development.

Collingswood’s Plans for Development Near Station

July 26, 2007 Steph_Admin Comments Off on Collingswood’s Plans for Development Near Station