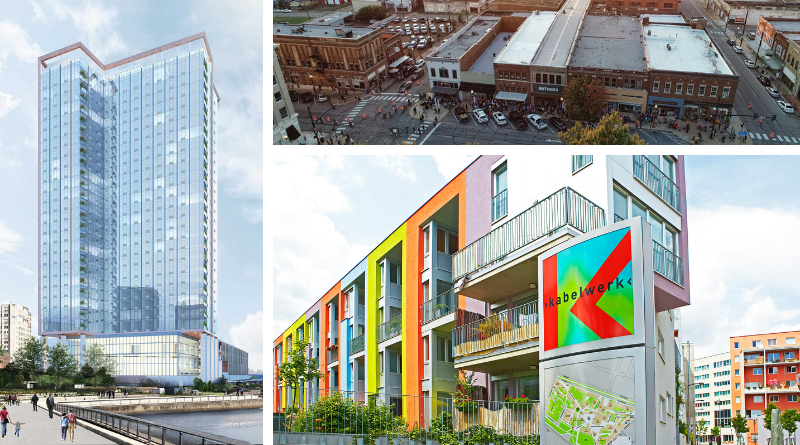 In recent years, the UK and New Zealand have both experienced deep crises of housing affordability, linked to decades of restrictive regulations and a lack of policy incentives. But, recently, the two have each proposed solutions that offer insight for unlocking smart growth in the United States. The New Zealand government issued requirements that all off-street parking obligations be removed, and that municipalities permit developments of at least six stories within walking distance of transit stations and downtowns. In the UK, the prime minister has issued a proposal to zone all land into one of three categories: conservation—with limited development; renewal—where infill and missing-middle, “gentle density” would be permitted; and growth—essentially transitioning from discretionary permitting to by-right approval for new development.

Ferries in Alaska. Rail in Oregon. States Dream Big on Infrastructure Funds.
Zach Montague and Emily Cochrane, The New York Times, September 24, 2021
With trillions of dollars in post-pandemic federal aid potentially on its way, The New York Times surveyed officials and elected representatives from various states on their plans to use the funds. For many, new and updated transit infrastructure is a chief priority, including electrifying buses in New Jersey and Connecticut, creating commuter rail in Louisiana, high-speed rail in Minnesota and California, and the Gateway Tunnel project between New Jersey and New York. Additionally, several states plan potential highway restructuring and removals with the funds, such as for the I-94 corridor connecting St. Paul and Minneapolis and the untangling of a “knot” of highways that isolate communities in Hartford, CT.

NEW YORK—MTA to Ticket Maskless NYC Subway, Bus and Train Riders After a Year of Lax Enforcement; Cover Your Face or Face $50 Fine
Clayton Guse, New York Daily News, September 22, 2021
The Metropolitan Transportation Authority announced a renewed effort to ticket mask-less passengers in the system. “The message is clear—wear a mask,” MTA police chief Joseph McGann said, “Riders who are still not getting this message will now see the cost associated with that thinking.”

BOUND BROOK—Bound Brook Planning Board to Hear Application for 143-Unit Development
Jared Kofsky, September 21, 2021
Developer Hamilton Street Urban Renewal LLC has applied to the Borough of Bound Brook to construct a six-story mixed use complex across the street from the municipality’s NJ TRANSIT rail station. The development would comprise 143 apartments, retail space, and parking. In addition to proximity to Raritan Valley Line service, residents would have access to several bus routes operated by Somerset County.

METUCHEN—Metuchen Eyeing Pedestrian Plaza Like Somerville’s Division Street
Suzanne Russell, My Central Jersey, September 20, 2021
The Borough of Metuchen, Middlesex County, and the North Jersey Transportation Planning Authority hosted a meeting to discuss the pedestrianization of New Street, a roadway located adjacent to Main Street, the municipality’s chief thoroughfare. From 2014 to 2019, nine pedestrians were hit by cars at the intersection of New and Main Streets, raising safety concerns. Money for the project comes from the larger, Federal Highway Administration-funded, Talmadge Avenue to Brunswick Avenue Safety Improvement Project. The proposed pedestrian plaza would be located a block from Metuchen’s NJ TRANSIT station.

NEWARK—Details Released Regarding Boraie’s Proposed 25-Story Riverfront Tower in Newark
Jared Kofsky, Jersey Digs, September 20, 2021
In Newark, a company associated with Boraie Development has applied for approval of a high-rise project. The 25-story building would contain 333 residential units and 3,750 sq. ft. of retail. Currently, the developer has not specified how affordable units will be distributed, a requirement needed to be in accordance with Newark’s Inclusionary Zoning Ordinance. The building would be located directly across from the NJ TRANSIT Newark Light Rail NJPAC/Center St Station and overlook the Passaic River. 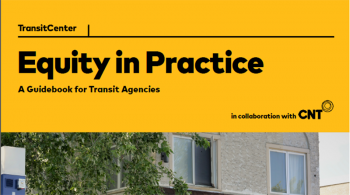 Equity in Practice: A Guidebook for Transit Agencies
TransitCenter, September 22, 2021
This resource, from TransitCenter and the Center for Neighborhood Technology, aims to provide best practices and case studies that address systemic inequities in transit. The detailed resource is organized according to five pillars that, broadly, call for articulating a vision for an equitable transportation system, connecting transportation conceptually to systemic inequity, acknowledging how past transportation decisions have created inequities, measuring equitable outcomes, and creating processes for marginalized communities to have their voices impact agency decisions going forward.

NEW MEXICO—ABQ City Council OKs Zero-Fare Bus Program
Jessica Dyer, Albuquerque Journal, September 20, 2021
The Albuquerque City Council unanimously approved a measure to eliminate fares on the City’s bus routes and allocated $3 million to offset losses in revenue. The pilot program will commence January 1, 2022 and run for the duration of the year. Previously, bus service had been set at $1 per ride and was free for adults over 60 and students aged 25 years or younger.

CALIFORNIA—San Diego County’s Traffic Impact Rules Could Limit New Housing in Unincorporated Areas
Deborah Sullivan Brennan, San Diego Union-Tribune, September 20, 2021
The San Diego Board of Supervisors will now use California state guidelines for traffic impact analyses, rather than traditional models. The new rules require developers to demonstrate that their projects will generate fewer Vehicle Miles Traveled (VMT) than the area average. Previously, VMT was measured against other unincorporated areas. Now, however, they must account for the entire region, including more populated urban areas. The rule change could encourage more compact, smart growth, as well as construction close to transit, to achieve reduced VMT.

CANADA—Residential Development Linked to Winnipeg Transit Infrastructure Sparks Community Pushback
Sean Kavanagh, CBC, September 22, 2021
Residents of the Waverley Heights neighborhood opposed a 232-unit TOD, saying it was out of character with the existing structures, and would generate extra traffic. The project is adjacent to a station on Winnipeg’s Southwest Transitway, a recently expanded Bus Rapid Transit (BRT) route that connects the University of Winnipeg to the City’s center. The University of Manitoba lies about 10 kilometers to the south. The district’s councilor, Janice Lukes, said that the project was in keeping with multiple plans approved by the city council, and that it was intended to complement the $600 million in rapid transit investment made along the corridor.

AUSTRIA—Vienna’s Radical Idea? Affordable Housing For All
Bloomberg CityLab, September 17, 2021
Rather than prohibiting the new construction of public housing, as the United States did in the late 1990s, Vienna chose to invest in “Social Housing,” providing subsidies to non-profit companies for affordable housing development. Vienna’s robust land use policies enable the City to keep land acquisition costs low, with the savings passed on to renters. Additionally, construction contracts are awarded competitively to developers with the best proposal, and judged based on architectural qualities, affordability, environmental performance, and social mix. As a result, Vienna has a large stock of well-maintained, high-quality public and social housing.

July 15, 2007 Steph_Admin Comments Off on Port Imperial: a World Class Planned Community Out of Reclaimed Brownfields