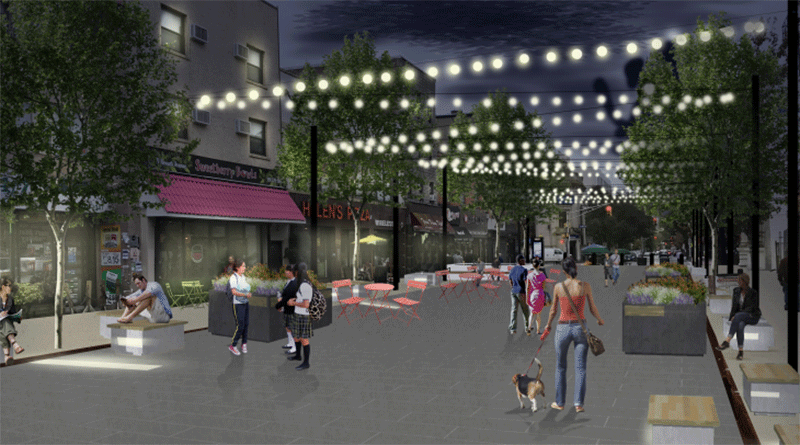 An artist’s rendering of the view towards Jersey Avenue as seen from the Newark Avenue Pedestrian Plaza. Courtesy of The City of Jersey City and Maser Consulting.

NJ Transit Set to Begin Elizabeth Upgrades
By Andrew Corselli, Railway Age, September 30, 2019
NJ TRANSIT has recently announced the construction of new station buildings and the extension of the platform at Elizabeth Station on the Northeast Corridor. In spring 2018, the agency approved the final design and construction with Anselmi and DeCicco. WSP USA Inc. will provide construction management services. The total project costs are estimated at $71 million and are scheduled for completion in 2022. The work will improve ADA access.

Demand for New Jersey’s Transit Hubs Expected to Remain Strong
John Jordan, GlobeSt.com, September 30, 2019
According to an in-depth report on the transit hub markets, “Keeping on Track” from JLL, despite decelerating leasing volume for the Northern and Central NJ office markets, tenants continue to be drawn to buildings with good access to mass transit. The report breaks down key markets as either Urban Transit Hubs, consisting of major CBD office markets with rail stations such as those in Hoboken, Jersey City and New Brunswick, or Suburban Transit Hubs, consisting of smaller-sized buildings in a larger area, such as Metropark and Morristown. Both transit hub markets are expected to remain active in the upcoming years.

Leasing Underway for Luxury Rental Residences near Rutherford Train Station
NJ Biz, September 30, 2019
The Parker, a luxury rental residence in downtown Rutherford, began leasing 52 residential units. The project at 106 Park Avenue is expected to draw commuters as it is situated two blocks from the Rutherford Station, which is one stop from Secaucus Junction and a less than 30-minute ride to both Hoboken and New York Penn Station. Monthly rents start at $1,955 with immediate occupancy available.

Overhaul of Newark Avenue Pedestrian Plaza to Begin in December
Chris Fry, Jersey Digs, October 1, 2019
Jersey City Mayor Steve Fulop’s promise for a suitable pedestrian plaza on Newark Avenue will soon be fulfilled through a $4 million revamp project that aims to create a friendlier and more welcoming environment in the city. The pedestrian plaza project kicked off back in 2015 with the elimination of vehicular traffic between Grove Street and Erie Street and continued last year with westward expansion to Jersey Avenue of the green paint indicating the car-free road. Construction of the project is slated for December.

Millions Secured to Help Prep for the Redevelopment of NAVWAR
Jennifer Van Grove, The San Diego Union-Tribune, September 27, 2019
The Board of Directors for San Diego Association of Governments (SANDAG) recently approved a budget amendment providing an additional $50 million to support initial site planning efforts for the redevelopment of a former Navy base. The project, “San Diego Grand Central Station,” would transform the 70-acre Naval Base Point Loma, Old Town Complex in the Midway District into an airport transit hub and vast mixed-use project. SANDAG and the Navy are currently evaluating how to redevelop the NAVWAR property and are expected to design an initial site plan this month.

Sedona Transit Implementation Plan Ready for Final Input, Will Be Presented to Council on Oct. 23
Staff, SignalsAZ.com, September 29, 2019
Transportation and traffic engineering firm LSC Transportation Consultants released a 330-page draft-final implementation plan, the Sedona in Motion Transit Plan, for an ambitious public transit program for Arizona’s Sedona/Oak Creek Canyon area. The transit plan aims to bring to fruition, through implementation, various concepts generated from years of transit studies. The focus of the effort is to enhance circulation service and develop a visitor-oriented shuttle with extended reach. The Sedona City Council will review the draft-final plan for approval and the public will be able to comment on the transit implementation at the City Council meeting on October 23rd.

Auburn Gresham Metra Stop, Which Broke Ground Yesterday, Could Spur South Side Retail
David Zegeye, Streets Blog Chicago, October 1, 2019
On Monday, the Greater Auburn Gresham Development Corporation broke ground on the new Auburn Park Metra Station on the Rock Island District (RID) line in Chicago. The $20 million station will comprise a pedestrian plaza and retail storefronts. As the new station will expand transit and job access, it is hoped that it will spur new transit-oriented development and businesses on the South Side.

Riyadh Metro Closes in on Completion
David Briginshaw, International Railway Journal, September 27, 2019
Saudi Arabia’s capital, the City of Riyadh, is nearing completion on the construction of a 176km six-line fully-automated metro and a 1900km bus network with three levels of service. The ambitious transit project will serve 85 metro stations and 3,000 bus stops. Following the opening of the bus network, slated for the fourth quarter of this year, metro lines will begin opening in mid-2020 with the whole system launched by the end of 2020.

RTA Joins Hands with Majid Al-Futtaim to Develop Land Near Metro and Bus Station
Gulf News Web Report, Gulf News UAE, October 1, 2019
Dubai’s Roads and Transport Authority (RTA) and Majid Al Futtaim Group (MAF) signed a Memorandum of Understanding (MoU) for a project to develop a parcel of land near the Mall of the Emirates Metro and Bus Station. The RTA’s Rail Agency CEO, Abdul Mohsen Ibrahim Younes, noted that signing the MoU serves the RTA’s objective of advancing public-private partnerships. The project is part of RTA’s transit-oriented development concept, which aims to increase the number of residential, business, and leisure spaces located within walking distance of public transportation in Dubai while simultaneously reducing traffic congestion and promoting environmental sustainability.

Retailers Line Up at Dubai’s Gold Souq Extension
Manoj Nair, Gulf News Business, October 3, 2019
In conjunction with the revival of the Gold Souq Extension, the Investment Corporation of Dubai’s (ICD) real estate division, Ithra Dubai, is putting its resources behind a transportation hub that would serve the wider Deira area. The intention of the TOD investment aims to “make people’s lives easier by reducing the distance between all three vital centres – their place of residence, their place of work and their place of leisure.” The 25-metre TOD site will comprise a bus station, the Palm Deira Metro Station, a taxi assembly line and a parking lot. A mixed-use complex for office space, hotel, retail and more will be constructed as part of the transit-oriented development.