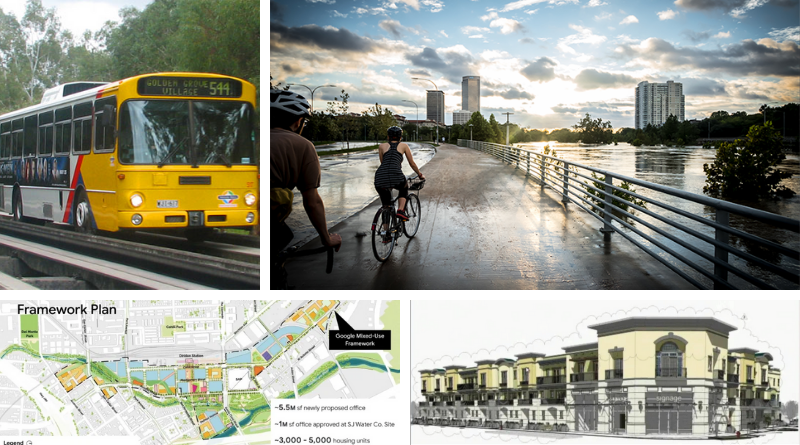 A Recipe for a Green and Just COVID-19 Recovery
Giuseppe Sala, World Economic Forum, September 11, 2020
Milan Mayor Giuseppe Sala explores the policies and actions to be taken to support a greener and more just world in a post-pandemic period. He and the other members of the C40 Global Mayors COVID-19 Recovery Task Force call for mobilizing resources and policies to make cities the economic engines of this recovery through investment in climate action, including: cutting emissions and creating jobs, and prioritizing investment in green jobs; safe, affordable housing; resilient infrastructure; renewable energy and zero-carbon mass transit. Sala notes that these efforts must recognize and address the disproportionate impact of the pandemic on the most vulnerable. Sala discusses efforts to make places safer and healthier through the creation of “15-minute cities,” where residents can meet their needs via a short walk or bicycle ride.

Transit Agencies Vow to Pursue Industrywide COVID Response Strategy
Kristin Musulin, Smart Cities Dive, September 10, 2020
Transit agencies face mounting challenges brought on by COVID-19 and are seeking ways to safely and effectively bring riders back to their systems while addressing financial challenges. To this end, more than 100 agencies have joined together with the American Public Transportation Association (APTA) to pursue a national Health and Safety Commitments Program designed to advance the industry’s COVID-19 response efforts and promote a unified strategy for boosting transit ridership amid recovery. The effort addresses four major goals: adherence to public health guidelines; avoidance of public transit by both riders and employees if they may be ill with COVID-19; cleaning and disinfection of transit vehicles/facilities and enforcement of face mask compliance; and communication of transit updates to passengers. Agencies that have pledged to meet these goals will display a “seal” on their transit vehicles and stations to indicate their commitment to health and safety to riders. Officials created a toolkit with information and marketing materials that agencies can use or create to share its commitment with riders.

CALIFORNIA—Coronavirus Economy: Bay Area Real Estate Bankruptcies Begin to Surface
George Avalos, The Mercury News, September 8, 2020
Recent bankruptcies for two residential projects are stark reminders of the disruption and uncertainty brought on by COVID-19. Neither of the projects, the Polaris Apartments in El Cerrito that would have resulted in 144 new units, and the other in Milipitas, that would have brought 27 new townhomes, had begun construction. The owners of both projects owe millions of dollars in mortgages for their properties and lenders have each filed notices of default and are moving forward with foreclosure. El Cerrito officials had hoped that the Polaris Apartments project could have helped the city meet goals related to low-cost housing as well as transit-oriented development – the site lies within the Transit Oriented High-Intensity Mixed-Use zoning district. As a mixed-use development to be located near the Milipitas Transit Center, that project was also seen to be a potential contributor to city goals.

INDIA—5 Things Delhi-2041 Master Plan Will Have Special Focus On
HT Correspondent, Hindustan Times, September 8, 2020
The new Delhi-2041 Master Plan provides a vision for the city for the next two decades and encourages urban development through transit-oriented development policy. The plan focuses upon five critical areas, all of which support the city’s urban development goals: air pollution, walkability, unauthorized colonies, pandemic resilience, and “blue green” policy (waterways and recreational spaces). The Delhi Development Authority (DDA) and the National Institute of Urban Affairs (NIUA), an advisory body on urban development to the Union Ministry of Housing and Urban Affairs, prepared MPD-2041 and are currently holding public meetings regarding the plan.

Somerville Approves 25-Acre Solar Farm on Former Landfill Site
Mike Deak, Bridgewater Courier News, September 10, 2020
It has been more than three decades since the landfill in Somerville has served that purpose. Over the years, plans for the space have evolved, and progress has been made toward remaking the area, but that progress is now taking a dramatic leap forward as the Borough has approved an agreement with CS Energy (operating as Hathaway Solar), a company based in Edison. The agreement calls for the construction of a solar facility on 25 acres of the landfill south of the NJ TRANSIT tracks. The borough and CS Energy have 120 days to finalize the formal redevelopment agreement, which will include details of the facility, the lease with the borough and a possible power purchase agreement. Adjacent to the Somerville Station, the Somerset Station project is also under construction, which will include two buildings comprising 371 apartments, 156 townhomes in 14 buildings, two parking garages, 4,000 sq. ft. of retail space and a 4,000-sq.-ft. community civic center.

East Brunswick OKs Housing, Retail for Former Wonder Bread Site
Susan Loyer, Bridgewater Courier News, September 5, 2020
The East Brunswick Township Planning Board recently approved plans for a project that could bring 520 homes and 18,000 sq. ft. of retail space to the former Wonder Bread factory site on Tices Lane. Garden Homes Development will lead the project, which will comprise both townhouses and apartment buildings on the 25-acre site. To help meet the township’s court-mandated quota, 104 of the homes are designated as affordable housing. The site is located within the Tices Lane Redevelopment Plan Area, and is part of the township’s larger Route 18 Redevelopment Vision. That plan also calls for the revitalization of 44 acres along southbound Route 18 between Ruth and Lake Streets, a proposed $500 million project that is expected to include a commuter parking structure, bus terminal, stores, a hotel, tech center and a medical services office.

CONNECTICUT—Union Station Centennial Brings $65-Million Transit-Oriented Development Deal
Jodi Latina, News 8/wtnh.com, September 10, 2020
The Connecticut Department of Transportation and the City of New Haven recently signed a letter of intent that outlines a new lease and funding agreement designed to support the 100-year-old Union Station and transit-oriented development. The agreement, which calls for $65 million in investment, will be in place for 35 years (with two 10-year extension options) and will allow the city to lease and operate the Union Station Transportation Campus and staff the partnership. Plans call for renovation of the station’s basement, first, and second floors to allow for new retail options, and to improve stairs, elevators, and escalators that will enable future adaptive reuse of the upper station floors and public restrooms.

MASSACHUSETTS—‘This is Transit-Oriented Development’: Springfield Officials Tour Renovated Overland Lofts
Jim Kinney, MassLive, September 9, 2020
Work will soon be completed on the first new apartment complex in decades in downtown Springfield, a city in western Massachusetts. Davenport Companies of Boston has transformed the Willys-Overland building at 151 Chestnut Street into 60 apartments. The structure was built in 1917 as an automobile showroom and warehouse. Rents will range from $850 a month for a 450-square-foot studio to $1,400 a month for a two-bedroom, fourth-floor duplex apartment with two bedrooms and an office on two floors. The building is a few blocks from Springfield Union Station; and commuter rail service has been proposed from Pittsfield through Springfield and Worcester to Boston. Davenport is considering other projects in the area.

CALIFORNIA—Google Village: Legislative Flop Impacts Big Downtown San Jose Project
George Avalos, The Mercury News, September 4, 2020
As the California legislature closed out its most recent session on August 31st, it failed to pass a significant bill that was anticipated to have considerable impacts on Google’s plans to develop a “transit village” in downtown San Jose. The measure, Senate Bill 995, would have permitted the fast-track development of certain major projects in the state, including the Google effort. It has support of the city’s mayor, Sam Liccardo, who requested the state legislature convene a special session, and local leaders and community stakeholders, such as the Diridon Area Neighborhood Group. Google envisions a transit-oriented neighborhood that combines work, commercial, residential, and recreational uses, and open space, for up to 25,000 employees.

AUSTRALIA—The O-Bahn Busway – Obscure Transit for The Masses
Lewin Day, Hackaday, September 10, 2020
An uncommon form of public transportation, the O-Bahn, is a guided busway operating in Adelaide, Australia. O-Bahn buses ride on concrete rails and perform much like rail transport. Top speeds on the system are 85 km/h (about 59 mph), but were as high as 100 km/h (62 mph) prior to 2012. The system’s lightly-modified buses can be driven on normal roads as well as the O-Bahn track. This dual use allows the system to take advantage of the high-speed dedicated network, and then seamlessly transition to the street, allowing riders to reach their destinations without transfers. The system carries an estimated 31,000 riders each day on average.

CANADA—Vancouver to Consider Eliminating Minimum Parking Requirements for New Buildings
Kenneth Chan, Daily Hive, September 10, 2020
The City of Vancouver may soon join Edmonton and other North American cities and abolish parking minimums for newly-constructed buildings. City Councilor Sarah Kirby-Yung has called for consideration of an “Open Option Parking” method that would allow the market to dictate what is needed.  In January 2019, the city changed its requirements to allow up to a 30 percent reduction in parking to developers when they aligned transportation demand management (TDM) efforts and up to a 60 percent reduction for rental housing developments. According to Kirby-Yung, “if successfully adopted and implemented in the City of Vancouver, with flexibility to meet the changing needs of residents and patrons over the long-term (e.g. mobility vehicles, etc.), an Open Option Parking policy could lead to improved development processes by ensuring parking supply and demand are aligned. An Open Option Parking policy would also increase the efficiency with which rezoning applications and development permit applications can be reviewed and approved.”

Harrison Follows Its Vision Towards Redevelopment

June 1, 2015 Stephanie DiPetrillo Comments Off on Harrison Follows Its Vision Towards Redevelopment