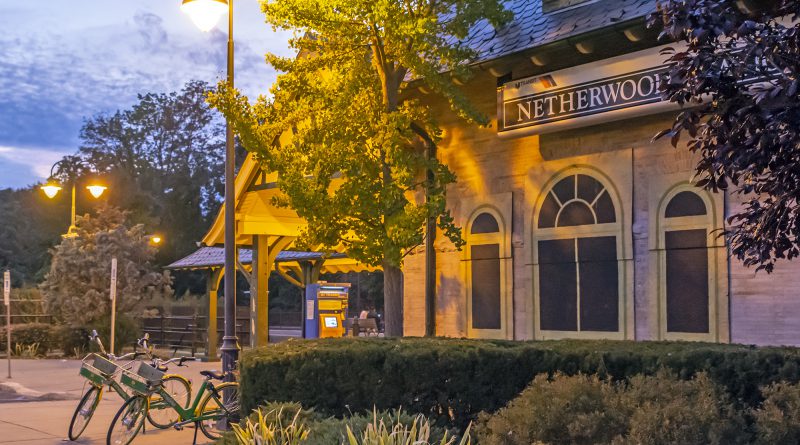 The Netherwood Station, along with the downtown Plainfield Station, are at the center of Plainfield’s efforts to attract investment and expand economic opportunity and mobility for residents

In March 2014, Plainfield secured designation as New Jersey’s 28th Transit Village. Five years and a strategic marketing campaign later, new multi-family residential buildings are under construction, downtown South Avenue is bustling with dockless bikes, and plans are in the works for a station pedestrian plaza.

Plainfield is home to two commuter rail stations on the Raritan Valley Line – the Plainfield Station, located in the heart of the downtown, and the Netherwood Station, located about a mile to the east. Both stations provide convenient access to New York City via Newark Penn Station. In 2018, 727 passengers boarded a train at the Plainfield Station on the average weekday, and 451 boarded at the Netherwood Station. The station areas are served by NJ TRANSIT local bus routes 819 and 822, as well as regional bus service to Newark and Port Authority Bus Terminal in Midtown Manhattan.

For decades prior to Transit Village designation, Plainfield witnessed limited development. But the City saw underutilized properties, including in areas around the train stations, as an opportunity for revitalization.

Many of those areas are now designated redevelopment areas with projects planned or under construction. While working closely with developers to push projects through in a streamlined manner, the administration of Mayor Adrian O. Mapp is also working to maximize benefits for existing residents. The City insists on redevelopment agreements that require developers to carry out neighborhood improvements or make financial contributions to local programs. The City is also concerned with issues of employment and connects residents with a number of local workforce training programs to prepare them for job opportunities generated by the new development activity.

The Building Blocks of TOD

The City amended the municipal zoning ordinance to include a Transit Oriented Development zone around the Plainfield Station in 2012 and the Netherwood Station in 2013. The zones permit intensive commercial and high-density residential land use in ¼ mile areas around the stations. The City of Plainfield has issued plans for 13 designated redevelopment areas, most located within a half mile of one of the two stations. Plans in proximity to the stations call for transforming brownfields and other underutilized properties into compact, vibrant, pedestrian-friendly, mixed-use areas within walking distance of the Plainfield Station and other public transportation.

According to Mayor Mapp, a vital, early step to attracting investment to the TOD zones was correcting popular misconceptions of Plainfield. For the past three years, the City has run “Discover Plainfield” television commercials in the tri-state area to promote the city’s cultural diversity, architecture, historic districts, culinary scene, local business incentives, and access to New York City.

“The rebranding has been important because for too long, we have suffered from a negative reputation, and we wanted to make sure the prospective investors knew that Plainfield was open for business,” says Mayor Mapp.

The City has also run ads on social media.

Mayor Mapp says the marketing campaign has succeeded in attracting the attention of investors; according to the Mayor, some developers have cited the television commercials as the initial draw to the Plainfield market.

“We’re now telling our own story,” he says.

Another early step in preparing for TOD was streamlining the project approval process to encourage redevelopment.

“I would encourage everyone interested in transit-oriented development to make it as smooth a process as you possibly can, so that those investment dollars will flow into your Transit Villages,” advises Mayor Mapp. “If you don’t provide a level of cooperation and the ease of doing business, it’s going to be difficult to attract people into your city.”

“I would encourage everyone interested in transit-oriented development to make it as smooth a process as you possibly can, so that those investment dollars will flow into your Transit Villages. If you don’t provide a level of cooperation and the ease of doing business, it’s going to be difficult to attract people into your city.” – Mayor Adrian O. Mapp

Plainfield has over $600 million of private investment in the pipeline, comprising roughly 2,000 residential units and nearly 500,000 square feet of retail and commercial space.

QUIN Sleepy Hollow, located less than a half mile from the Netherwood Station on South Avenue, opened on October 3rd with a ribbon cutting ceremony. The 212-unit residential project was developed by JMF Properties, a boutique development firm specializing in high-end, multi-family housing. In an interview with NJTOD.org, Joseph Forgione, founder of JMF Properties, says the location near the Netherwood Station as well as access to major highways and nearby retail, made the site ideal for development.

The QUIN Sleepy Hollow targets a wide range of market segments, from “empty-nester” babyboomers looking to downsize to single professionals wanting access to the New York City job market. Forgione also expects the property to appeal to young couples who want to start a family while renting in a walkable neighborhood.

Forgione identifies the City’s business-friendly environment and use of expert consultants to review project proposals as major draws for JMF Properties.

Plainfield on the Move

Plainfield’s TOD zones boast not only new development but new ways of getting around.

By encouraging alternatives to the private automobile, the City is also hoping to encourage sufficient foot traffic to support the new retail.

Plainfield launched a dockless bikeshare in 2018 in partnership with LimeBike. The service utilizes a dock-free network that allows users to pick up bikes and leave them wherever the trip ends.

Developers, too, are working to meet the growing demand for diverse mobility options. At QUIN Sleepy Hollow, JMF Properties will construct concrete pads at the front of the property along South Avenue and at a nearby park to accommodate LimeBike and other bikes. Tenants will also have access to bikes that the property owner will make available.

The City is also working to create a pedestrian plaza north of and adjacent to the Plainfield Station that they hope will add to the vibrancy of the station area and generate foot traffic to support local businesses. To create the pedestrian-only thoroughfare, the City proposes to close Gavett Place as well as North Avenue, which is lined by local businesses, between Park and Watchung Avenues.

“We believe that this pedestrian mall in Plainfield will encourage walking and biking and will create a vibrant center for events and activities, which will further support the commercial development we are attracting around the train station,” says Mayor Mapp.

According to Forgione, there is a growing market for high-end rentals. People now have the kind of pride in their rental units once reserved for home ownership.

“The entire mindset of owning a home, and that’s your investment, and raising a family, and then selling the home for your retirement, I think that entire mindset has left,” he says.

Tenants are willing to make longer-term investments in rental units. Many of the residential tenants who have leased at QUIN Sleepy Hollow following an earlier soft opening have opted for a two-year lease, rather than the typical one-year, following a trend seen at other JMF properties.

To attract critical parts of the rental market such as downsizing babyboomers, Forgione notes, multi-family housing should boast features similar to those in a single-family home, including high-end finishes and storage space. Other on-site amenities, such as gyms, have also become essential.

But the City’s economic vision does not rest solely on attracting residential and mixed-use ratables and new residents with disposable income. The City hopes to leverage the real estate investments to provide broader community benefits.

“We want to make sure that as Plainfield moves forward, people who live in our city across all income levels are part of the revitalization and they have some of the opportunities that exist,” explains Mayor Mapp.

The City has taken intentional steps to help existing residents benefit directly from the development activity. In July, a job fair was held to connect candidates to job opportunities at the construction site of The Station at Grant. Plainfield residents also have access to Elizabeth Development Company programs that provide workforce training and apprenticeships to women and minorities, including in solar installation and the construction trade.

The City negotiates redevelopment agreements that require developer contributions to various infrastructure, community, and educational facilities and programs. Developer contributions have supported the purchase of school computers, the Plainfield Public Library, streetscape improvements, the rebuilding of a park, and Plainfield Promise, a program that provides scholarships to young people for vocational training.

The tension between serving existing residents and attracting new residents is a concern for many TOD efforts across the state; communities pursuing TOD should keep a close eye on Plainfield, as the City’s quest for inclusive TOD continues.