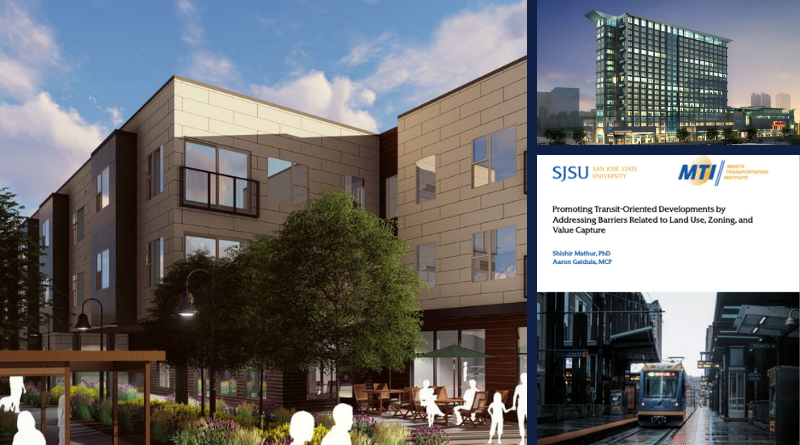 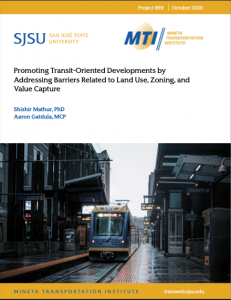 In this study, Shirshir Mathur, PhD, professor of Urban and Regional Planning at San Jose State University, and Aaron Gatdula, MCP, identified land use, zoning, and value capture-related barriers that stymy the construction of TODs as well as strategies used or that could be used to surmount these hurdles. Informed by a review of existing literature, the researchers conducted a national survey of transit agencies as well as of the major cities served by these agencies. They also developed case studies that explore the steps taken to overcome identified barriers in more detail.

Most importantly, the researchers focused on the tools that transit agencies have used to advance TOD projects. They found that most transit agencies, and the jurisdictions which they serve, have not made use of value capture (VC) techniques, an important set of tools employed in other parts of the world to address these barriers. VC tools allow agencies and jurisdictions to secure or “capture” increases in the value of land that result from public investment and infrastructure improvements as well as changes in governance, such as up- or re-zoning. These tools include joint development projects, tax increment financing (TIF), special assessments, lease or sale of land or air rights, and impact fees.

The authors note that most agencies are explicitly barred from purchasing land for the construction of TOD, nor do they have land use or zoning powers over station-area land. These conditions pose severe challenges to employing VC techniques, which are further hampered by an absence of legally-enforceable interagency agreements where they operate. Instead, most agencies employ a looser set of collaborative arrangements, such as public-sector interagency working groups, private-sector committees, and public-private partnerships to advance these efforts, with, perhaps, less effective results.

The researchers suggest a need for integrated collaboration between transit agencies and municipalities, enabling flexibility in contract negotiations and in the application of local and TOD-related development specifications. In addition to more flexibly integrating land use, VC, and zoning, the researchers call on state and regional leaders to create more comprehensive enabling policies to encourage an increase in the use of VC.

As transit agencies create value through their core services and system expansions, these reforms have the potential to help them reap some of the benefits, such as capitalizing on soaring real estate values caused by station construction that can then be reinvested into the transit system. Transit-oriented development with value capture can ensure thriving transit systems for generations to come.

The chart below displays the case studies and observations about TOD and VC challenges.