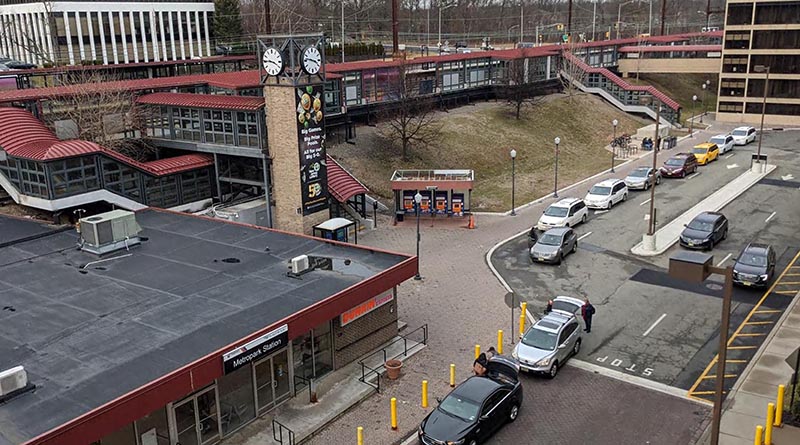 Metropark Station opened in 1971 as a suburban park-and-ride near the interchange of State Route 27 and the Garden State Parkway. As State leadership looks to improve regional access and environmental sustainability, new plans for the station area aim to convert the existing parking facilities into a vibrant and accessible, mixed-use community.

Metropark has been the focus of redevelopment by NJ TRANSIT and Woodbridge Township since the early 2000s. The effort to reinvent the Metropark Station area has taken major steps forward in recent months amid a renewed, State-level push to advance development near transit stations.

In October, NJ TRANSIT issued a Request for Qualifications from developers to transform a 12-acre site adjacent to the station into a mixed-use, transit-oriented development. The proposed project will bring residential, retail, office, and hospitality space to the station area and add open and green space, as well as parking.

The recent effort to designate a developer follows collaborative efforts by the agency and the municipality to implement TOD at the Avenel and Woodbridge stations. Both partners hope the Metropark project will attract people from around the region to work, learn, shop, dine and socialize and improve the brand and long-term competitiveness of the surrounding Metropark district.

In addition to Metropark, NJ TRANSIT has advanced development efforts at a number of sites around the State. The agency posts developer solicitations on the NJ TRANSIT Development Opportunities webpage.

Metropark Station, which sits adjacent to a regional corporate office park, is the busiest station on the Northeast Corridor and the fifth busiest station in NJ TRANSIT’s commuter rail system with an average of more than 7,400 weekday passenger boardings (FY18). The station is also an important hub on the Amtrak system—more than 1,000 passengers board Amtrak regional service each day—and is served by six NJ TRANSIT bus routes. Nearby highways, such as the Garden State Parkway, New Jersey Turnpike, and US Route 1, make the station an important commuting hub.

NJ TRANSIT’s pursuit of the redevelopment project is part of its renewed focus on realizing sustainable economic benefits from its real estate assets. The transit agency aims to enhance the economic development of Woodbridge and the region, maximize ridership at the station, enhance station access, and foster sustainability and smart growth.

In July 2020, NJ TRANSIT engaged a consultant to prepare the Metropark Feasibility Study, which identifies market opportunities and challenges for the redevelopment site.

As a major transportation hub, Metropark sees commuters arriving and departing by bus, private vehicle, rideshare, taxi, and by foot and bike. At peak commute hours, drivers regularly experience congestion on nearby major roadways. In August 2020, NJ TRANSIT issued a station circulation and access plan to guide future development at the site and identify safe and efficient access to and from the transportation facilities and surrounding areas. The plan makes recommendations for enhancing connections with adjacent neighborhoods, which are separated from the station by major roadways, as well as with the nearby office park. Proposed pedestrian improvements include wider sidewalks, multi-use pathways, bicycle lanes, high visibility crosswalks, and improvements to ramp crossings.

Pedestrian and vehicular circulation and access improvements to roads outside the redevelopment site will require coordination between NJ TRANSIT, the Turnpike Authority, Middlesex County, Woodbridge Township and the designated developer

Within the station area, the plan identifies circulation routes for commuter vehicles as well as for development traffic. The study also identifies pick-up/drop-off points for different modes of transportation and makes recommendations for improved bus operations, including bus staging, bus bays, and a designated area for local shuttle routes.

Once developer responses to the solicitation are received, by November 30, NJ TRANSIT and the Township will develop and adopt a redevelopment plan for the designated redevelopment area. With approval from NJ TRANSIT, the selected developer will enter into a conditional redeveloper agreement with the Township.

A Renewed Focus on TOD

The Metropark redevelopment and recent State-level push to advance TOD follow a decades-long effort by NJ TRANSIT and State partners to foster smart growth. In 1994 NJ TRANSIT issued Planning for Transit-Friendly Land Use: A Handbook for New Jersey to clarify TOD best practices. NJ TRANSIT is now working to revamp the Handbook, with the new and improved version set for release in 2021. In 1999, NJ TRANSIT received a Federal Highway Administration grant to create the Transit-Friendly Land Use (TFLU) program to address a lack of TOD knowledge among local communities. The program is situated within the agency’s Planning Department.

In the same year, TFLU partnered with the New Jersey Department of Transportation (NJDOT) to launch the New Jersey Transit Village Initiative. The program came on the heels of the New Jersey State Development and Redevelopment Plan, which called for centered, compact development as a response to growing concern over the financial, social, and environmental impacts of “sprawl” development patterns.

TFLU offers municipalities assistance in developing station area plans. Since 2005, the program has provided technical assistance to over 50 communities. The plans help present a clear vision for development based on public engagement. NJ TRANSIT launched the Transit-Friendly Development newsletter, successor to NJTOD, in 2005 in partnership with Rutgers University. The website and weekly newsletter disseminate information on best practices and promote local TOD efforts taking place in New Jersey and across the country.

The initial focus of the TFLU program was to increase ridership on NJ TRANSIT service. More recent efforts have focused on improving access to transit, first-mile/last-mile connections, and the circulation of vehicles, pedestrians and bicyclists in station areas and near bus stops. NJ TRANSIT is now working to promote development around  high-frequency bus corridors, in addition to commuter rail stations.

Station surface parking lots are a prime target for redevelopment. While recognizing the demand for commuter parking, NJ TRANSIT aims to enhance access to the transit system for all modes of transportation, including bicyclists and pedestrians.

NJ TRANSIT expects partner municipalities and developers to think holistically and apply smart planning practices to projects. Developments should make efficient use of land, create mixed-use, walkable neighborhoods, enhance access to transit, and balance parking with other needs. Both the Planning and Real Estate Departments work with the host municipality to ensure land use regulations, such as zoning ordinances, accommodate the project. NJ TRANSIT requires partnered municipalities to implement traffic parking demand management strategies and curb management strategies to accommodate passenger drop-offs and pick-ups and micro-mobility options like bikes and e-scooters. In addition, NJ TRANSIT requires the developer to maintain pedestrian, bicycle, and automobile access to the transit system during construction.

The Importance of Placemaking for Suburban TODs

April 14, 2015 Stephanie DiPetrillo Comments Off on The Importance of Placemaking for Suburban TODs

June 16, 2021 Noah Harper Comments Off on (Overlooked) Association Between Express Bus Station / Stop Proximity and Multifamily Rents with a Surprise About Transit Mode Synergism and Implications for Transit and Land Use Planning