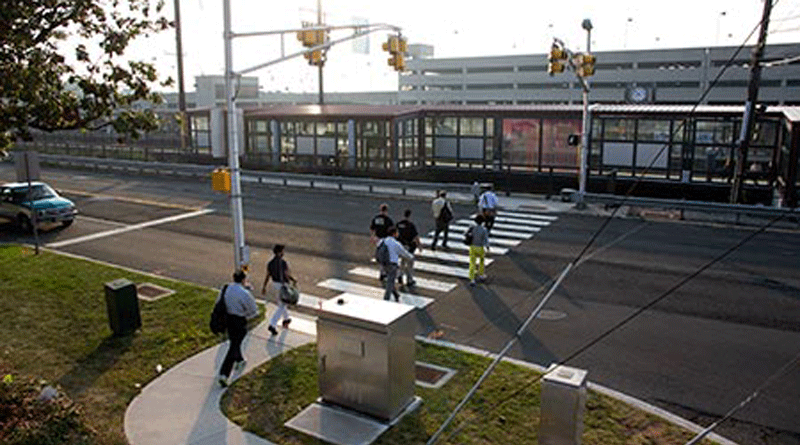 It is perhaps a truism to say that we live in challenging times. We have seen increasing instability in markets, whether in housing, finance or energy. We are left wondering where the bottom is and what steps we can take to improve the future—for ourselves, our families, our region, and our nation. But, while they are tumultuous, recent events also provide direction for future action. When opportunities arise, we need to be prepared to make sound choices. The approach of a new federal administration, coupled with growing widespread interest in energy efficiency and infrastructure improvement, offers promise for policies and actions that encourage more sustainable ways of living. Transit-oriented development is one significant way to achieve our long-term sustainability goals.

Sustainability through TOD means reducing auto dependency, restoring transit infrastructure, and recycling urban land. This can be achieved through the convergence of three policy objectives—energy efficiency, infrastructure efficiency and housing supply. The case for sustainability through intensifying development near our transit stations rests primarily upon the idea that people who work, live and play in transit-rich locations, do so in less resource-intensive ways. The familiar adage of “reduce, reuse, recycle” well describes the impetus behind TOD.

If we as a nation hope to reduce our growing demand for energy, a comprehensive plan that reduces consumption in each major sector of energy use is necessary. Our total energy usage derives from three sources—buildings, transportation and industry. According to the U.S. Department of Energy, transportation (the moving of people and cargo), accounts for 29 percent of total energy use. Activity that takes places in buildings (heating, lighting, refrigeration, etc.), consumes another 39 percent. Industrial activity (the production of goods and services), accounts for the remaining 32 percent of energy consumption. Reducing energy use from any and all of these sectors will help. But reductions in energy usage in one area that necessitate increased usage in another area will not get us to our goal. For example, it doesn’t make much sense to move people to a new, energy-efficient building if the building site is in a distant location requiring higher energy use for transportation. Or, stated another way, any energy savings made by more fuel-efficient vehicles and cleaner fuels could be offset by the fact that people have to drive longer distances. 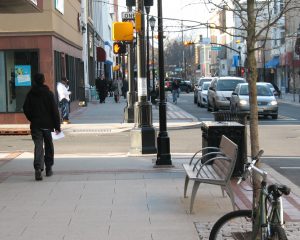 Transit-oriented development represents one form of “sustainable urban development,” achieving twin benefits in energy-efficiency by virtue of both the building envelope and location. Settlement patterns, or where people choose to build their homes and businesses, have been shown to affect overall energy demand (Andrews, 2008). Compact, mixed-use development with access to transit, or TOD, has the potential to reduce energy usage and lower greenhouse gas (GHG) emissions by decreasing vehicle miles traveled and facilitating more walking and biking. According to the recent report Growing Cooler: The Evidence on Urban Development and Climate Change, our sprawling development patterns are largely responsible for the fact that the number of miles driven by Americans has increased three times faster than the population since 1980 (Ewing et al., 2007). See recommended readings in January 2008 issue of the newsletter. In addition, Reconnecting America and the National Housing Trust have reported that the typical suburbanite uses more energy for commuting than on heating and cooling their home (2007). It should further be noted that land consumed by sprawling development also reduces natural habitat that acts as carbon sinks.

Energy savings through TOD are due not only to reductions in miles driven, but also by virtue of what is built. Office and commercial space, whether new construction or retrofit, increasingly is being built to meet stricter energy standards. Housing in TODs is mostly multi-family development, the type preferred by smaller households. This form of housing often shares common walls between units and consumes less energy than typical sprawl development, although there can be a counteracting “heat island” effect (Andrews, 2008). In fact, one study found that compact multi-family developments use 20 percent less energy than single-family detached homes (Ewing et al., 2007). Transit-friendly development in existing downtowns can result in even greater energy savings as rehabilitating existing buildings generally consumes less energy than new construction (Leinberger and Anderson, 2008).

According to the Pew Center on Global Climate Change, well-planned compact growth such as TOD, consumes 45 percent less land, and costs 25 percent less for roadways, 20 percent less for utilities, and 5 percent less for schools compared to sprawl (Brown et al., 2005). Living near transit enables people to own fewer or no cars and to drive less, thus putting less pressure on our road, bridge and parking infrastructure. It also allows us to take advantage of underutilized land in our urban centers. This will help not only to revitalize our cities, but enable us to invest scarce resources where they can do the most good for the most people. However, additional initial costs often are encountered with redeveloping land in urban and sometimes brownfield locations. In addition, TOD projects in urban settings can face difficulties with land assembly or require cleanup stemming from past use.

Greenfield building, however, also incurs costs—costs that usually are borne by our communities, state, and nation, rather than the developer. These costs include the roads to reach those locations, loss of habitat that cannot be easily replaced, and added emissions going into the air. A true cost accounting should also include the time and fuel spent traveling to and from these locations and additional vehicles that might otherwise need not be purchased. This is not to say that residents of TODs don’t own cars or do not drive; rather they tend to own fewer cars and drive fewer miles than those in greenfield locations. 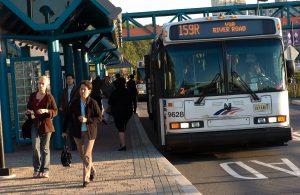 Instead of a two-car family (or more!), a family living in a transit-accessible location can live well with one car. One family member may very well drive to work, but another can commute quite easily by walking, biking, or riding the bus or train. Research has shown that the residents of compact, walkable communities travel 8 to 32 percent fewer miles by car than the typical American and own fewer cars than residents of conventional development (Ewing, 2007). A recent Transit Cooperative Research Program (TCRP) study found that residents of TODs made 44 percent fewer vehicle trips than were predicted by the current ITE manual, the standard used for calculating trip generation. The same study recommended reducing parking ratios in residential TODs, by as much as 50 percent (Arrington, 2008). Researchers in New Jersey also have found this to be the case. For example, our research recently found that residents living in 14 of 19 state-designated Transit Villages owned fewer cars than the state average, traveled to work by transit (12 of 19) more than the state average, and walked to work (14 of 19) more than the state average.

Beyond environmental and infrastructure concerns, sustainability through TOD must embrace the idea of economic sustainability. TOD has the potential to support economic well-being by achieving better balance in housing and transportation costs. For most households, housing is the single largest cost, followed by transportation. Together they consume about 50 percent of household expenditures (Reconnecting America and the National Housing Trust, 2007). For recent generations of homebuyers, the way to get more bang for the buck had been to scour the ever-expanding suburbs for a house that was affordable. For some, the equation was to drive farther to buy more house and more yard. For others, it was merely finding anything that was affordable. In essence, the prevailing logic was that the benefits of living in a suburban location outweighed the costs of gas, the car, the insurance, and travel time.

Recently, however, we have seen a reversal of the “drive ‘til you qualify” mindset. We have seen the future and it is $4/gallon gas. Hitting $4 in mid-2008, gas achieved its all time high both nominally and adjusted for inflation, rising to triple its inflation-adjusted low in February 1999. We also saw more people travel by transit, some for the first time. During the second quarter of 2008, NJ TRANSIT ridership grew by 3.5 percent for rail and 3 percent for bus as gas prices were reaching that $4 mark and despite a slumping economy. Living and working in transit-rich locations will become increasingly valuable as the cost of private travel continues to rise; notwithstanding, the recent collapse in prices, few doubt that high prices will return in the not-too-distant future.

These factors bolster a growing desire to live and work near transit that makes sense for many households. This desire is particularly strong among two segments of the population—baby boomers and Generation Y. As average household size continues to decrease, as the proportions of young and elderly householders grow, and as housing preferences shift toward convenient access to a diversity of activities, housing in transit-proximate locations will be increasingly in demand. Thus, it is in the interest of communities well-served by transit to provide a diversity of housing options bolstered by good access to employment and retail centers.

In addition, affordable housing near transit can help those of modest means commute to work, shop, attend school and play without owning a car or more than one car. With less money needed for transportation, more becomes available to spend on other needs. This idea is behind the concept of “location efficiency”—that is, living and working near transit can allow a household to spend less on transportation, as well as reduce the time spent traveling. At a recent TOD conference, Doug Foy, president of Serrafix Corp. and former Massachusetts secretary for commonwealth development, put the cost of a car into perspective. Owning and operating a conventional car, he said, is the equivalent of carrying a $100,000 mortgage.

The next few years are likely to be difficult—for our nation and for each of us individually. Many decisions will be necessary in the short term for ways to improve our situation and to prepare for the long term when $4-a-gallon gas, or worse, returns. It’s important to remind policy-makers that TOD is one significant strategy to reach our long-term sustainability goals. Living and working near transit not only increases transportation options, it can also increase housing choices, broaden work opportunities, and reduce household costs. It is rare when advancing one’s self-interest can align with good public policy. But by taking the right steps to reduce energy consumption, protect the environment and make the most of existing infrastructure, we can improve our quality of life. TOD has the potential to do just that.