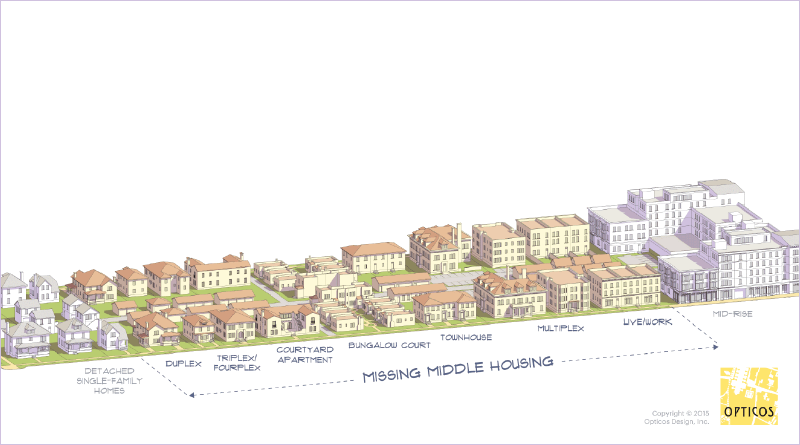 This image was created by Opticos Design, Inc. and used in The Real Estate Mantra by the American Public Transportation Association

As TOD raises the bar (and the rent) for developers, some residents face the threat of displacement. Transit-oriented cities need to preserve and promote affordable housing, too.

A study reveals that it is getting increasingly expensive to live near public transit. As more and more cities invest in mixed-use developments, house prices and rents within a half-mile of transit facilities are increasing at a faster rate than those in neighborhoods farther away.

Earlier this month, The American Public Transportation Association and the National Association of Realtors released The Real Estate Mantra – Locate Near Public Transportation. The report celebrates the recovery of the real estate market since the Great Recession and emphasizes the value of property location with respect to transportation gateways. In fact, transit-proximate properties held their value despite plummeting prices of home and office spaces in 2008. The report presents comparisons of rent prices and property sales from seven different transit-oriented cities across America, comparing neighborhoods that were proximal to heavy rail, light rail, and bus stations to neighborhoods that were transit-distal. In Boston, Hartford, Los Angeles, Minneapolis-St. Paul, Phoenix, Seattle, and Eugene (Oregon), properties are generally more expensive to own or rent if they are located within a transit shed. Results are consistent across residential, office, and commercial spaces.

“Neighborhoods with high-frequency public transportation are in high demand.”

Indeed, transit centers have many appealing qualities for their neighbors. Residents in the area enjoy greater access to employment and reduced transportation costs, employers gain access to talent in and around urban cores, and retail and commercial establishments have the advantage of steady pedestrian traffic.

Mixed-use transit-oriented developments are becoming increasingly more desirable in urban spaces. Apart from increased accessibility to jobs and activities, benefits of these neighborhoods include significant cost-of-living reductions. Transit-rich neighborhoods are often more walkable and have higher retail and amenity density, reducing the number of households that rely on privately-owned vehicles. Across the seven study regions, one in four households did not own a vehicle. On average, a household in a transit-rich area spends $2,500 to $4,000 less on transportation per year.

More than 40,500 occupied units were added near high-frequency public transportation in the seven study areas between 2012 and 2016. Post-recession demands for rental units drove up rent prices all-around, but increases in rents in public transit facility areas were between 2 and 14 percent higher than rent prices in non-transit facility areas. Office spaces per square foot in transit-proximate areas in Boston, Hartford, Los Angeles, and Phoenix are 5 to 43 percent more expensive than offices in transit-distal areas. In Boston, office sales prices increased by 38% in the transit shed while values of office properties in the region only increased by 3 percent. Commercial properties and office spaces in transit sheds in Hartford are 13 to 14 percent more expensive than those in non-transit areas and around the region. Los Angeles saw a 73 percent increase in commercial property values in transit sheds versus 58 percent in the region. In Phoenix transit sheds, median sales price per square foot for office spaces increased by 54 percent , outperforming non-transit areas and regional growth which increased by 49 percent and 50 percent respectively.

Affordability becomes an issue when expensive housing prices and rents push out a large sector of those who most need housing near transit and create a displacing effect on low-to-moderate income renters. Local governments and transit agencies in transit-oriented communities are intervening to prevent further economic segregation and to ensure adequate supplies of affordable housing. Strategies adopted include inclusionary zoning, tax-increment financing and early land acquisition.

Amidst the changing retail landscape and complexities of the housing market near to and distant from transit, local government and transit agencies can—through inclusionary zoning, expedited permit processes, and early land acquisition efforts—reduce barriers to creating affordable housing in transit-oriented areas.