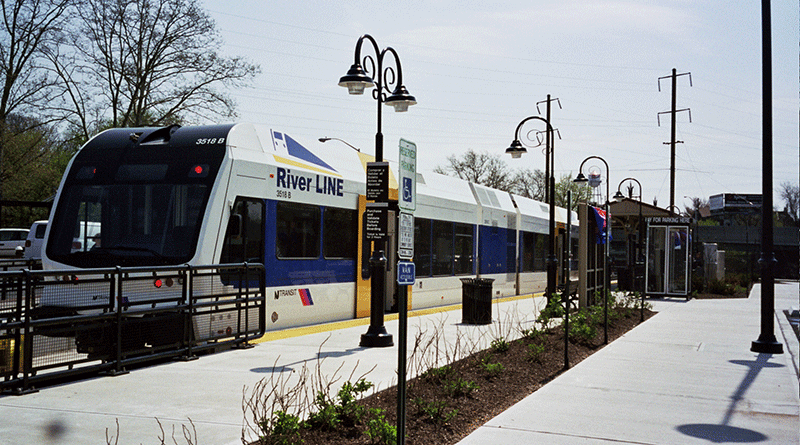 Efforts are underway to capitalize on the $75 million Trenton station improvement project that is scheduled for completion this summer. The renovated station, the Trenton Transit Center, serves as a transit hub providing rail passengers with: access to the Northeast Corridor for NJ TRANSIT rail service to New York City; Newark and intermediate points; SEPTA service to Philadelphia; AMTRAK intercity service to Washington, D.C. and Boston; and the RiverLINE light rail line, where passengers can transfer to the Northeast Corridor as well as travel to Camden and to points in between. In addition, nearly a dozen NJ TRANSIT bus routes serve the greater Mercer County region from the station.

The city recently released its new Downtown Master Plan. The extensive plan, in the works since 2003 and recently completed by the planning and engineering firm, URS Corp., will help advance economic development in the city and serve as a guide for planning and developing projects in six downtown neighborhoods, including the Downtown Transit Village (the area around the Trenton Transit Center). Specifically, the plan calls for mixed-use redevelopment on a number of sites proximate to the station. The plan targets the current Station Plaza Parking Facility for redevelopment and proposes a mid-rise mixed-use tower (residential over two levels of office/commercial) that would wrap structured parking. A large-scale office tower is proposed for a site northwest of Perry and Ewing Streets—about a 10 minute walk from the station. Other recommendations include low-rise (3 to 4-story) mixed-use on other sites, blending more closely with the Ewing-Carroll historic district, located north of State Street. See Chapter 6: Downtown Transit Village for more information.

In addition, the city has hired Basile Baumann Prost Cole & Associates, Inc. (BBPC) to undertake a market feasibility and demand analysis, and has received preliminary findings from the Annapolis-based consultants confirming that the area proximate to the station is the most logical (and viable) location for the city to focus office and subsequent residential redevelopment efforts. BBPC cited New Jersey’s newly enacted Urban Transit Hub Tax Credit, the current station renovations, an interested development community and favorable demographic conditions, as strengths of the station area for redevelopment.

The development community had made its interest known, even before the Urban Transit Hub Tax Credit became law in January and the release of the Downtown Master Plan. Last year, three developers approached the city with plans for projects located near the station. During the summer, the city designated the Capital Real Estate Group to develop within the Trenton Station redevelopment area on the basis of its VISTA Center conceptual plan. Last fall, both Nexus Properties and the Matrix Group were also designated as developers of station area projects.

The Capital Real Estate Group, lead by Trenton-born, former Wall Street financier Dan Brenna, envisions the Trenton station area as a regional destination, situated an hour by rail from New York City, 30 minutes from Philadelphia and 1½-hours from Baltimore via Amtrak—the mode of travel preferred by the elite business community. His firm has proposed several phases of development, beginning with the construction of a 25-story Class A, office building on the Greenwood Avenue (south) side of the station (see conceptual plan below).

The developer believes the office tower would serve as a signature building for Trenton, easily seen from both Route 1 and Route 129, and as a beacon, would draw attention to the rail station. Brenna said the project would meet the nation’s highest environmental standards and earn a Leadership in Energy and Environmental Design (LEED) green building rating of platinum, the first office building in New Jersey to achieve this level of environmentally-friendly building and performance. The Greenwood Avenue project would be Brenna’s second venture in Trenton, the first being the Icehouse Loft project—a residential conversion of a former ice factory in the Chambersburg neighborhood. The new station-area project is currently in final design stage; noted architect Robert Hillier leads the design team. The VISTA group plans to follow up this phase with residential and commercial redevelopment in the same area.

Nexus Properties of Lawrenceville, NJ has proposed commercial development to the north of the station—two 25-story office towers and a parking garage on the block bounded by East State Street, South Clinton Avenue and Raoul Wallenberg Avenue. Nexus is currently in planning and design stages for its “Loft for Living” residential project in the Lee Overall Building, at 576 East State Street – a quarter mile from the station. Units will include studio, one- and two-bedroom units, at 1,500 to 2,000 square feet. Nexus anticipates units to be completed by mid-2009 and to be priced starting in the mid-$200,000 range.

The Matrix Group of Cranbury, NJ, proposed both commercial office and new residential development during its April 8th presentation to the city council. Early planning for the project calls for an eight-story office building, 1,400-space parking garage, housing and retail space on East State Street between South Clinton and Chestnut avenues, located about a quarter-mile from the station.

In other news, Trenton has joined with the NJ Housing and Mortgage Finance Agency to become the first community to adopt the statewide Live Where You Work program. The program provides low-interest loans to homebuyers who wish to live in the city where they work. Homebuyers will also be able to take advantage of downpayment and closing cost assistance. Additional incentives are available to those seeking to purchase homes in targeted neighborhoods, including those proximate to the Trenton rail station. This program may be of particular interest to two-earner households in which one partner works in Trenton and the other commutes by rail.

April 20, 2007 Steph_Admin Comments Off on Maryland — Exploding with TOD Activity