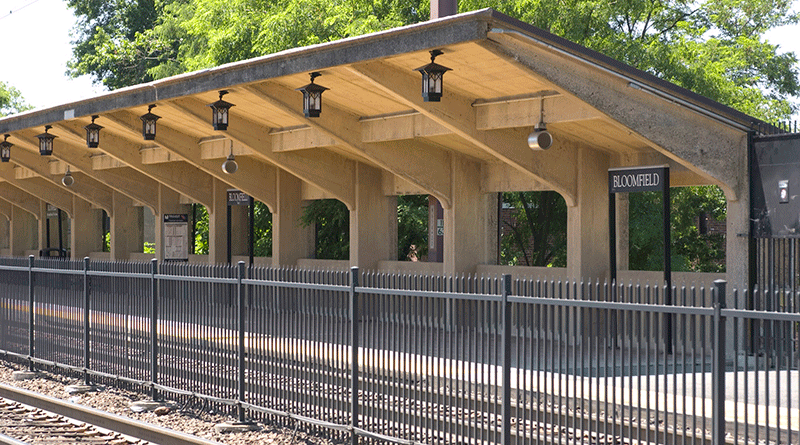 Bloomfield, a New Jersey Transit Village since 2003, continues to make progress on a comprehensive redevelopment plan for its town center, which includes the main rail station at Washington Street. Public meetings throughout the fall and winter set the stage for the current phase of redevelopment planning. Bloomfield officials are now working closely with Newwork, a Newark-based planning firm, and the Value Research Group LLC, of Livingston, to finalize the downtown plan. This marks a renewed undertaking by the community to revitalize its downtown; an earlier plan that centered around a proposal by developer Forest City Daly stalled when conflicts arose over the scope of the project and eminent domain issues.

The recent public workshops focused on community visioning, shaping the downtown, and interactive public design. Each of these sessions helped build consensus between residents, township officials and local stakeholders on the major emphases of the plan. Bloomfield Avenue, Washington Street and Farrand Street, along with portions of Belleville Avenue, have been targeted as the primary improvement corridors. A key concern voiced by all parties was the importance of creating a more walkable, shoppable downtown that retains the neighborhood’s essential character. In keeping with this ideal, a comprehensive vision plan for the area was presented in April.

In May, Value Research Group and Newwork presented the Design Guidelines and Redevelopment Plan to the community. The proposed guidelines and plan specify four districts in Bloomfield’s downtown, each with its own set of building specifications for use, height and form. Planners also developed a set of street typologies – commercial corridor, event street, residential street and mixed retail, each with its own characteristics. For example, a commercial corridor would be characterized by a four-lane roadway, on-street parking, bike signage and a comfortable 15-foot wide sidewalk. Five key intersections were noted.

Providing adequate parking in the station area was another area of resident concern. As part of the overall downtown redevelopment effort, Bloomfield commissioned a parking study by Level G Associates, LLC to determine possible locations and the feasibility of a new parking deck to serve both the town center and the train station. In a study completed earlier this year, Level G recommended the construction of a five-level parking structure on Lackawanna Place. The structure, which would be located across from the station, would replace existing parking and would satisfy the need to be a part of a larger redevelopment effort for the entire block. See the Bloomfield Parking Deck Study for more information.