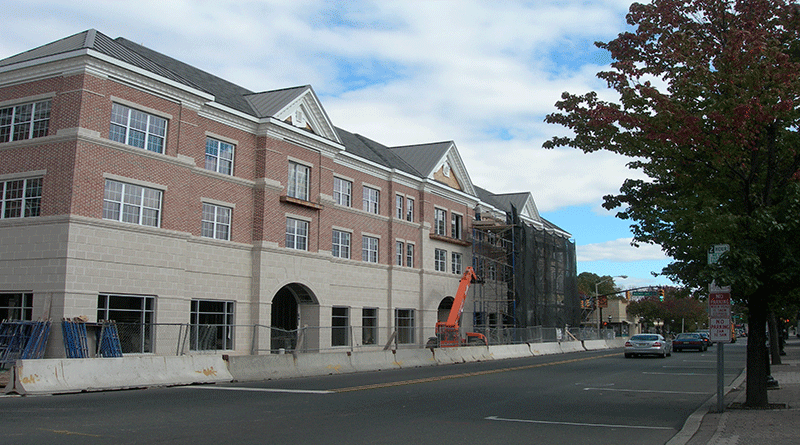 Cranford Township, a designated New Jersey Transit Village, will soon see a rise in its downtown residential population, a trend that its Downtown Management Corporation (DMC) hopes will continue. Units in the new Cranford Crossing development, built by Westminster Communities, will go on sale this fall. The project will consist of 50 luxury condominium units, 22,000 square feet of retail space and a municipal parking garage. The garage was scheduled to open November 11th and will serve both retail shoppers and commuters, with annual passes available.

The development is situated adjacent to NJ TRANSIT’s Raritan Valley Line train and bus station from which transit service is available to Manhattan, Newark and Jersey City. In 2005, the project was one of four honored with a Smart Growth Award from New Jersey Future as a forward-thinking development that will improve the state’s communities while preserving natural areas. In February, town officials began negotiations with another builder for the Riverside redevelopment project at High and Chestnut Streets (see rendering below) . That project stands to add 100 more residential units and 50,000 square feet of commercial and retail space to the downtown area.

DMC Chairman Jonathan Jaffe takes pride in the number of new businesses that have opened in Cranford’s Transit Village district during 2006. From apparel and fine gift shops to ethnic restaurants and ice cream parlors, Jaffe asserts Cranford’s downtown is thriving and ripe for a residential complement to take shape. Kathleen Prunty, downtown director for the DMC, is coordinating a study to determine how partnering with the arts community might further enhance Cranford’s overall attractiveness by providing studios and exhibit spaces for original art. Prunty noted Cranford’s tradition as a haven for artists and is awaiting a planning study conducted by Professor Leo Vazquez of Rutgers University’s Bloustein School. The DMC and its partner, the Jersey Central Arts Studio, allotted $14,000 for the study. Additional private and corporate grants have helped defray the study’s cost.