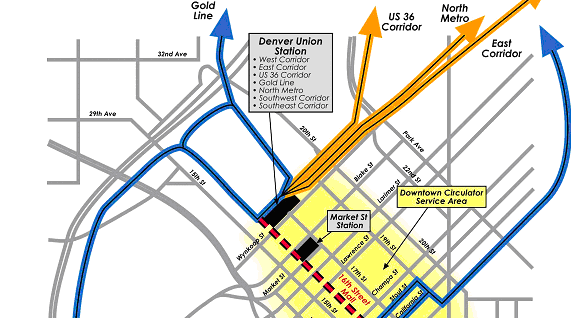 The Denver region stepped to the forefront of TOD and Smart Growth last November when local voters endorsed FasTracks, a decade-long transit development program. By passing a referendum to dedicate local sales tax revenues toward the $4.7 billion endeavor, voters set in motion one of the most ambitious transit expansion plans undertaken by an American metropolitan area in recent decades. By 2016, FasTracks calls for the construction of 119 miles of new light and commuter rail lines, 21,000 park-and-ride spaces, 18 miles of bus rapid transit, and an expansion of regular bus services.

The FasTracks referendum was approved by almost 60 percent of voters supported by a wide-ranging coalition of 30 urban and suburban mayors. In addition, FasTracks and TOD fit into the Denver Regional Council of Government’s MetroVision 2030 plan, which calls for the creation of dozens of distinct urban centers throughout the region to accommodate future growth in a way that lessens the impact of growth on the region’s environment and infrastructure. As seen elsewhere in America, a strong public sector commitment to transit and TOD is often the most crucial piece of the TOD puzzle.

Besides altering daily travel patterns in the Denver region, FasTracks is expected to transform regional development patterns — which will influence travel habits well into the future. A report, completed in October 2004 by Denver’s Livable Communities Support Center and the Environment Colorado Research and Policy Center, found that 51 of the 57 transit stations on the drawing boards have strong TOD potential, with 18 stations having developable areas in excess of 10 acres. The former Stapleton Airport site is the largest such site with more than 10 square miles.

Denver’s light rail system, which began service in 1994, carries over 30,000 riders per day and has spawned successful TODs, such as Englewood City Center with over 400 housing units, as well as office and retail space. Despite strong growth in traditional urban neighborhoods in Denver during the 1990s and early 2000s, most of the region’s growth has come in the form of auto-oriented suburban development. According to a Brookings Institution report on Denver’s growth trends, nearly 50 percent of commutes in Denver today are made from suburb-to-suburb, a travel pattern that is often difficult for transit to serve. The highway congestion that results from such commuting has contributed to Denver’s poor rankings in the Texas Transportation Institute’s 2005 Urban Mobility Study: although it is the 19th largest metro area, it ranks 13th in hours of delay per traveler and 9th in overall travel time.

The sheer scope of FasTracks promises to change how the region develops by strongly influencing future decisions regarding the location of residential and commercial development. By establishing a truly regional network of high-speed transit connections, FasTracks will lay the framework for a regional network of interdependent and interactive TODs, with the area’s largest TOD — downtown Denver — as its anchor. This potential for region-wide TOD goes well beyond the public’s current perception of TOD as a novelty and elevates it to the status and the critical mass necessary to accomplish smart growth objectives.
For more information: