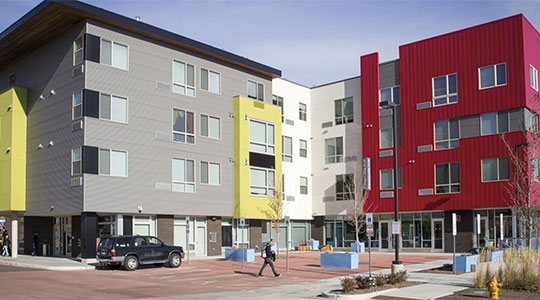 The John D. and Catherine T. MacArthur Foundation in February granted $250,000 to Denver and awarded $2 million in low interest loans to Enterprise Community Partners to help preserve and provide affordable rental housing for working families near public transit. Using the loans, Enterprise will capitalize the startup of the Denver Transit-Oriented Development (TOD) fund to finance the preservation and creation of more than 1,200 units of affording housing within one-half mile of existing and new rail service, and within one-quarter mile of high-frequency bus routes. The MacArthur Foundation funds will be used to leverage additional private capital; currently $15 million in pledged investment has been devoted to the fund. The grant to Denver will enable the city’s Office of Economic Development to establish a national model of public-private partnerships linking housing and transit development.

These funds are part of MacArthur’s “Window of Opportunity” initiative, a 10-year, $150 million effort to improve at least 300,000 affordable rental homes nationwide, as well as bring about policy reforms to preserve a total of a million homes. In the current round of grants, the MacArthur Foundation is distributing $32.5 million nationwide to preserve more than 70,000 affordable homes. The program is designed to counter affordable housing losses through demolition, condo conversion, expiring government subsidies, and rising rents. These threats to the affordable rental housing market affect one-third of all U.S. households that currently rent; it is feared, in the near term, that rental households are expected to grow in number due to rising foreclosure rates, placing additional demands upon the limited supply.

The Denver TOD fund is being established as the Denver Regional Transportation District (RTD) undergoes the largest current public transit expansion in the nation—an effort that may offer an opportunity to ease transportation and housing costs for low-income families. In 2005, RTD began its FasTracks program—a 12-year comprehensive plan to build and operate commuter and light rail; expand and improve bus service; and develop park-and-rides throughout the eight-county metro region.

Recent economic growth and renewed interest in urban living have increased demand for housing within Denver. This rising demand has pushed housing costs out of the reach of many of Denver’s working families—especially in locations with good access to downtown employment. Consequently, Denver families earning between $20,000 and $50,000 spend 59 percent of their income on housing and transportation, according to a 2006 study by the Center for Housing Policy. This situation appears to be worsening as increased demand has raised rents while affordable units have been cleared to make way for higher-priced units. A recent market study by BBC Research and Consulting concluded that at least 25,000 additional units are needed to meet Denver’s low-income housing demand. By providing low-income households access to affordable housing near public transit, the Denver TOD Fund would reduce two of the most important cost burdens faced by families.

Another partner in the Denver effort, the Urban Land Conservancy (ULC), will be the TOD fund’s sole borrower and will be responsible for acquiring property and working with local partners to create and preserve housing. Target properties include existing federally assisted rental properties, unsubsidized affordable rental properties, and vacant or commercial properties in desirable locations. The ULC will be able to hold properties for up to five years in order to maintain flexibility in securing long-term subsidies for affordable housing.