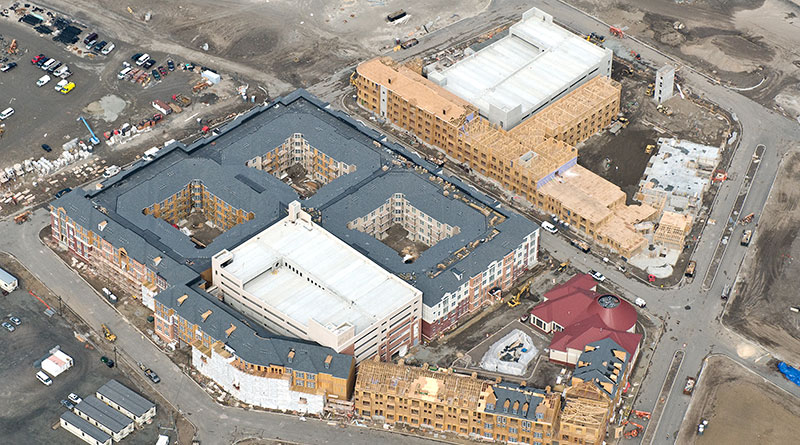 The first redevelopment project at The Peninsula at Bayonne Harbor, Alexan CityView, has been completed at the 430-acre, two-mile long land mass jutting into New York Harbor that once housed the Military Ocean Terminal Bayonne (MOTBY). Plans for The Peninsula call for the creation of six districts featuring residential, commercial, entertainment and recreational uses connected by more than two miles of waterfront walkway. The Alexan CityView is a 544-unit rental community that is located in the Bayonne Bay District within walking distance of the Hudson Bergen Light Rail system’s 34th Street Station. Ferry service connecting the Peninsula with lower Manhattan and Liberty Island is to start this fall. Planners envision a dedicated trolley route that would operate along the spine of the peninsula connecting the various developments with the light rail station. Shuttles now operate between Alexan CityView and the station.

Alexan CityView offers studios, one-, two- and three-bedroom homes; rents range from $1,595 to $3,265.  The first 86 units became available in mid-June and additional units will be marketed in mid-September. More than 100 units have been leased, some prior to their availability. Alexan CityView is a project of Trammell Crow Company, a nationally recognized developer that has also been active in Jersey City and New Brunswick.

The project has been designed to meet the standards required for LEED for Homes Silver certification, and will be the nation’s largest residential LEED-certified community. A small number of apartment and townhomes are oriented to the street, with entrances via stoops. Parking is provided in two garages and on the street, providing 754 residential and 15 guest spots. One parking space per unit is included in the rental fee; leasing an additional parking space costs $125 per month.

Trammell Crow is one of three groups named to redevelop portions of the Peninsula. Atlantic Realty is slated to develop the balance of the Bayonne Bay District, located to the east of Alexan CityView. The Fidelco Group, in partnership with Roseland Property Company, was designated to redevelop Harbor Station, the westernmost district at the Peninsula. The first phase of this project, Harbor Station North, will be a short walk to the 45th Street light rail station via the existing 45th Street Bridge over Route 440. Harbor Station South is located within walking distance of the 34th Street light rail station.  Both the Atlantic Realty and Fidelco/Roseland projects are at the pre-approval stage of the redevelopment process.

For more information about the redevelopment of the former MOTBY, see the Bayonne Local Redevelopment Authority website.