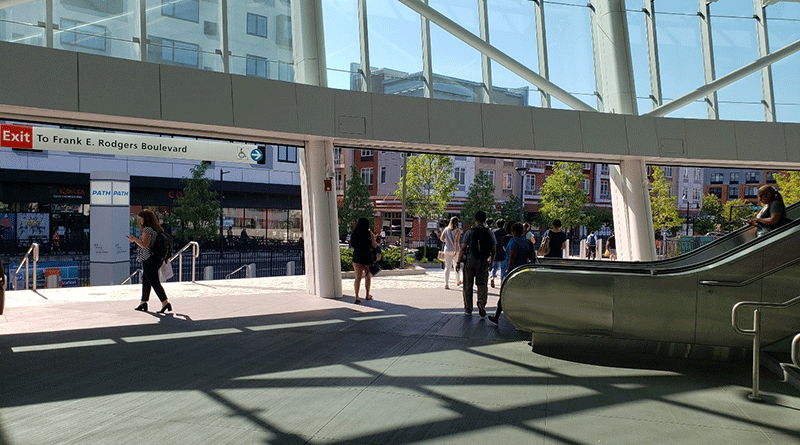 The Town of Harrison was once a manufacturing powerhouse known as the “Beehive of Industry.” Companies such as Crucible Steel, RCA, Hyatt Rollerbearings, Harrison Alloys, and others employed as many as 90,000 workers within the town’s borders. Like much of the Northeast, Harrison saw its manufacturing industry decline starting in the 1970s – along with the jobs the industry provided and much of the town’s tax base.

As deindustrialization took hold, many of the manufacturing facilities were vacated, leaving large tracts of land to the south of Interstate 280 unproductive and contaminated. But members of the town’s political leadership, including then Mayor Frank E. Rodgers and Councilmember Peter Higgins, saw in the former industrial landscape an opportunity to reposition the community to keep up with a changing economy.

Decades after the assembly lines fell silent, Harrison is once again alive with activity. Moving away from—but not forgetting—its industrial past, the town has embraced a vision of a walkable, mixed-use community with prime access to the region’s job market.

The town is strategically located across the Passaic River from downtown Newark and less than 10 miles from the Hudson River waterfront and Manhattan. It is also proximate to major highways, including the NJ Turnpike and the Garden State Parkway, as well as the Lincoln Tunnel. But it was the PATH station in southern Harrison that has been the linchpin in the municipality’s vision. Today, the station provides access to Jersey City, Hoboken, and Lower Manhattan. It also provides direct service to Newark Penn Station, where travelers can catch regional NJ TRANSIT commuter and Amtrak services, as well as transit connections to Newark Airport.

In 1997, Harrison declared a 250-acre area from its waterfront to I-280 an area in need of redevelopment. After more than 20 years of planning work, environmental remediation, and development activity, surface parking lots and former industrial properties have given way to mixed-use residential and commercial buildings with easy access to a recently renovated PATH train station.

The municipality hired Heyer, Gruel & Associates to create a redevelopment plan re-envisioning the area as a vibrant, mixed-use, walkable community. The redevelopment area comprised large tracts of vacant land and abandoned buildings, and a road network designed for manufacturing facilities. Much of the land was environmentally contaminated. There continue to be active warehouse facilities and accompanying truck traffic in the area.

“Harrison realized there was an opportunity because of the PATH station located in the middle of the area,” says Susan Gruel, Principal at Heyer, Gruel & Associates. Gruel’s firm prepared a plan aimed at capitalizing on the PATH station and the Passaic River waterfront.

The plan established a new street hierarchy consisting of “concourses,” “boulevards,” and “streets” that balances vehicular traffic with pedestrian activity. The plan also established regulations and design standards for buildings in the area, as well as streetscapes, open space, public art and other aspects of a transit-oriented community.

The plan also called for an uninterrupted public waterfront walkway and green spaces along the Passaic River. When complete, the walkway will extend from the I-280 Stickel Bridge and terminate at a planned waterfront park near the Jackson Street Bridge (between Harrison and Newark).

Most of the redevelopment area lies within a 100-year flood plain. Rather than blocking public access to the waterfront with a floodwall, the town coordinated with the U.S. Army Corps of Engineers and NJDEP to incorporate the planned walkway into the Harrison portion of the Passaic River Tidal Flood Control Project. Flood control measures will consist of a system of floodwalls and levees that will protect the entire redevelopment area.

The town worked with NJDEP to develop a Municipal Public Access Plan (MPAP) to expand access points to the waterfront. The MPAP requires all development projects to develop, maintain, and manage a section of the walkway and allow unrestricted public access.

Though not part of the original redevelopment plan, the first project to break ground was the Red Bull Arena. Home of the New York Red Bulls of Major League Soccer, the 25,000-seat arena was completed in 2010. In 2018, about 19,000 fans on average attended a Major League Soccer game at the facility, bringing additional transit riders and visitors to the community.

A 1,440-space parking garage opened in early 2011 adjacent to the Harrison PATH Station. The project was completed through a partnership between Ironstate Development and the Hudson County Improvement Authority, which financed the project with $45 million in bonds.

Since then, nearly 3,000 residential units have been built in the redevelopment area. According to Richard Miller of The Pegasus Group, a designated redeveloper, tenants are primarily young professionals who commute into Manhattan. They are drawn to Harrison by the new, high-quality, multi-family housing that is more affordable than options in the Manhattan market.

The first residential development to break ground was Harrison Station. The $750 million project by Ironstate Development and The Pegasus Group is a mixed-used residential and commercial building located at 300 Somerset Street across the street from the Harrison PATH station and parking garage. The first phase was completed in 2011 and was fully leased in less than a year. A second phase added the 138-room Element by Westin hotel.

BNE Real Estate Group developed the 141-unit waterfront luxury rental project Water’s Edge located about a half mile from the PATH station. Adjacent to Water’s Edge along the Passaic River and 1st Street is Riverpark, developed by Riverpark at Harrison LLC and consisting of 172 for-sale units.

Also near the stadium at the intersection of Frank E. Rodgers Boulevard and Cape May Street, the CoBalt Lofts and Steel Works are the first two components of the larger Riverbend District development, a partnership of Advance Realty and DeBartolo Development, LLC. Redevelopment of the site included the demolition and clearance of industrial buildings and removal of nearly 50,000 cubic yards of contaminated soil. Each of the properties consists of 286 apartments. Future phases of the project will include residential, office, and retail.

More development is underway. Ironstate Development is currently completing the second phase of Harrison Urby, which will comprise 381 apartments and a parking garage with 491 spaces. This adds to the 679 apartments, 3,760 square feet of retail space, and 524-car garage included in the first phase. Ironstate’s 330 Harrison is the third phase of the Harrison Station project and added another 329 apartments, with a design that pays homage to Harrison’s industrial heritage. On the waterfront at Harrison Avenue and Dey Street, BNE Real Estate Group’s 257-unit One Harrison opened in May 2019.

Miller attributes development progress to the role of the Harrison Redevelopment Agency in coordinating and pushing forward the development process and a municipal administration that works effectively with developers. The town has also provided long-term Payments-in-Lieu of Taxes (PILOTs) that allow developers to pay a negotiated service fee instead of property taxes.

Miller points out the importance of the redevelopment plan, which establishes clear requirements for development. Having the regulations in place simplifies negotiations between the municipality and developers and makes the development process more predictable.

“In Harrison, they believed in their plan and followed through,” said Miller. “In some other towns, the redevelopment plan is just the beginning of the conversation.”

Retail activity typically lags behind residential leasing in new, mixed-use development. Gruel believes the area is starting to reach the residential capacity needed to bring the retail to life. Parking, which has mostly been accommodated by structured parking, remains a challenge, but the municipality is pursuing innovative solutions. In 2018, the town implemented valet parking requirements for restaurants between the hours of 6pm and 10pm due to lack of proximate parking facilities in some areas.

Segments of the waterfront walkway have been completed along the Hampton Inn and the adjacent site of the Hess gas station at the corner of Passaic Avenue and Harrison Avenue. On the other side of the Bridge Street Bridge, the walkway continues along the One Harrison, Water’s Edge, and Riverpark properties.

Transit ridership in Harrison has increased significantly, thanks, in part, to the new development. In 2018, there were over 2.5 million passenger boardings at the Harrison PATH station. That’s up 23 percent from just over 2 million boardings five years prior.

The Port Authority of New York and New Jersey (PANYNJ) recently completed a $256 million upgrade of the Harrison PATH Station. A new eastbound station was completed in June 2019, following early project phases that resulted in a new westbound station, renovations to existing buildings, and amenities and services in the station.

The renovations feature a light-filled, glass-and-steel design, modern elevators, widened stairs, escalator access to the platform, and countdown clocks that will tell passengers when the next train will be arriving. A lengthened platform will accommodate longer, 10-car trains on the Newark-WTC line in the future, allowing for increased capacity.

The town pursued partnerships with both public and private sector actors to realize the vision for the redevelopment area.

“It takes a lot of partners and leveraging of funding sources,” Gruel said. “Harrison on its own can’t do everything.”

Due to the difficulties of developing on former industrial sites, some projects received support from state agencies. The New Jersey Economic Development Authority supported development of Element by Westin with $7.3 million under the Economic Redevelopment and Growth program.

The developer of Harrison Commons spent $15 million for cleanup at the site, but sewer and water infrastructure in the area was funded through $4.3 million in NJ Environmental Infrastructure Trust low-cost financing. The municipality received a $3.9 million NJDEP Hazardous Discharge Site Remediation (HDSR) loan for investigation and initial remediation of the site of a future development near the PATH station along Frank E. Rodgers Boulevard.

As new housing, retail, public spaces, and other amenities take shape, Gruel believes that residents in areas of Harrison outside the redevelopment area will also benefit.

“The redevelopment area is accessible to areas north of 280, and the housing prices in the northern part [of Harrison] have increased in value” because of the new development, says Gruel.

According to Miller, about a third of the town’s property tax revenue (including PILOT payments) comes from properties within the redevelopment area.

While the studios and one-bedroom apartments that dominate the redevelopment area are mostly intended for young professionals without children, two-family homes are being built in other parts of Harrison. According to Miller, the town is eager to have families put down roots and is investing in schools.

“Harrison wants families. The town is investing to improve the school district in order to attract residents,” says Miller.

The redevelopment plan states that the area was “never intended to be a ‘town within a town,’ but rather a part of the fabric of the existing Town.” Time will tell if the new commuter population will put down roots in the Harrison community.