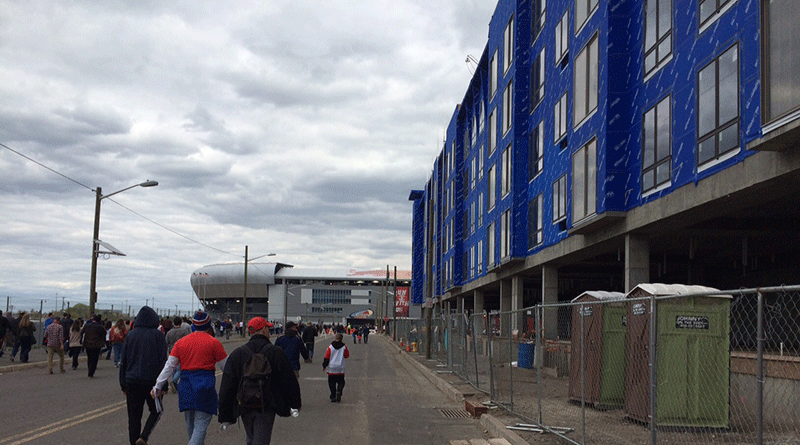 Harrison is steadily moving forward with its TOD redevelopment plan by making the most of its location and its transit assets. Formerly known for its heavy industry – and once home to as many as 90,000 jobs – Harrison has plotted a course of environmental cleanup and diversified redevelopment designed to attract new residents and businesses. In the aftermath of industrial decline, a long-term vision of mixed-use redevelopment – centered on its PATH station and its walkable street network – has arisen.

In 2010 Harrison had a population of fewer than 14,000 according to the US Census. Current estimates indicate that the city’s population has grown to over 15,200, a gain of 11.8%. Some of this growth may be attributable to recently built and planned development near the PATH station. The redevelopment area, designated in 1997, covers 250 acres or about 32% of the town’s 1.2 square miles. As reaffirmed in the 2012 Harrison Waterfront Redevelopment Plan, Harrison has embraced transit-oriented development as one of the core principles guiding its improvement activities. The plan calls for intensive, mixed-use redevelopment near the station, an emphasis on pedestrian amenities to encourage vibrancy at the street level, and parking management.

Transit is one of Harrison’s best assets. More than 7,000 passengers board at the Harrison PATH station each weekday – nearly 2.2 million annually. Riders can take the 20 minute trip to the World Trade Center in lower Manhattan or travel to Newark Penn Station (2 minutes), Journal Square (9 minutes) or Exchange Place (16 minutes) in Jersey City, or Hoboken (27 minutes). During peak hours PATH trains operate about every 5 minutes, and every 35 minutes during off-peak hours. Additionally NJ TRANSIT bus service connects the community to many of the region’s employment centers – downtown Newark, Newark Liberty Airport, downtown Elizabeth, Jersey Gardens mall, Port Newark, and Port Elizabeth.

PATH riders will soon be able to enjoy improvements to the 1936 Harrison Station. Approved in 2012, the $256 million upgrade will add interior waiting areas, extend platforms to accommodate longer trains (10-cars vs 8-cars), improve passenger access and flow, and add elevators to allow ADA accessibility. When completed in 2017, the station will accommodate more passengers and better connect to the community and the region.

The updated 2012 Waterfront Redevelopment Plan calls for the continuing remediation of contaminated properties and implementation of flood control measures. Goals of this latest redevelopment plan continue to promote the Town’s vision and include diversifying the Town’s tax base, increasing employment and business opportunities, expanding public open space and increasing access to the waterfront, improving pedestrian and vehicular circulation, and broadening the types of housing available in the community.

Harrison’s early planning efforts allowed for the development of the Red Bulls Arena, completed in 2010. More than 19,000 fans attend each Major League Soccer game at the facility, bringing additional transit riders and visitors to the community. Other early projects include a 1,440 space parking garage that opened in early 2011 adjacent to the Harrison PATH station. The project was funded by the Hudson County Improvement Authority and developed in partnership with Ironstate Development.

Also completed in 2011 was the first phase of the $750 million Harrison Station project developed by Ironstate Development and the Pegasus Group. This mixed-use building, at 300 Somerset St, stands across from the Harrison PATH station and parking garage. The initial phase offered 275 apartment units and more than 12,000 square feet of retail space. The project was fully leased in less than a year. The second phase was completed in 2014 and added the 138-room Element by Westin hotel to the project. In spring 2014, Ironstate broke ground on the third phase which will add 320 residential units and new retail space. Construction should be completed this fall.

Several other projects are gaining a foothold in Harrison’s burgeoning residential market. Among these is Water’s Edge, a luxury waterfront rental project on Dey St, located about a half mile from Harrison Station. BNE Real Estate Group developed the 141-unit complex, which offers views of the Passaic River. Completed in fall 2014, the project is fully leased.

In October 2014, Hampshire Cos. and CrownPoint Group broke ground on two 52-unit residential buildings on Bergen St, north of the PATH station. Phase One of the project is due to be completed in 2015.

Russo Development is nearing completion of the first phase of Vermella Harrison, which is close to the Red Bull Stadium, south of the Harrison PATH station. Located on Frank E. Rodgers Blvd South between Riverbend Dr and Crucible Dr, the five-story mixed-use project will feature 400 apartments, 15,000 square feet of ground floor retail when finished. The building will wrap a 400 space parking garage. Published reports state that the first 100 apartments should be available to the public in July 2015.

Another project on the horizon is the Riverbend District located at the intersection of Frank E. Rodgers Blvd and Cape May St. The project is a partnership of Advance Realty, one of the five original redevelopers designated by Harrison, and DeBartolo Development, LLC. At completion, the 35-acre Riverbend District property will have 20,000 square feet of retail space, a hotel, and 2,000 housing units. Redevelopment of the site included the demolition and clearance of industrial buildings and removal of nearly 50,000 cubic yards of contaminated soil. The project’s first phase is underway and includes 286 apartment units. Additionally, Advance Realty recently announced plans for an AC Hotel by Marriott as part of the Riverbend District.

These projects are just a start to what will eventually be built in Harrison. Residents and visitors alike recognize the value Harrison offers. More affordable than Hoboken and Jersey City, only ten minutes further along the PATH, Harrison is living up to its potential as a transit-friendly mecca. Station improvements, together with new housing and retail, are coming together to create a richer and more dynamic transit-friendly community.