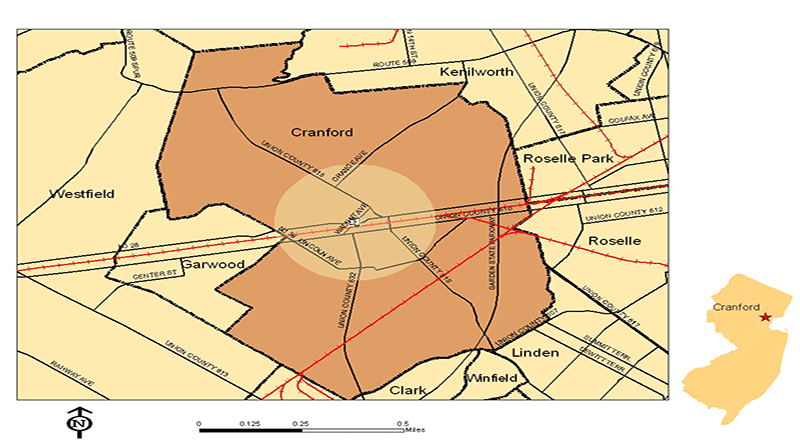 In 1997, Cranford officials came to grips with the fact that $3 million of streetscape improvements and thousands of dollars spent on events and promotions had not resulted in the kind of revitalization this town anticipated when it created New Jersey’s first Special Improvement District (SID) 13 years earlier.

Those activities did not hurt the downtown’s image, but did little to encourage business recruitment, development of new retail and residential spaces, or reinvestment by existing business and property owners. The turnaround began the following year when the township commissioned DANTH, Inc. to assess the business district’s obstacles and opportunities. The report, which has since been leveraged to obtain Smart Growth grants and, ultimately, a New Jersey Transit Village designation, laid out the primary drawbacks of this traditional, suburban downtown located in the heart of Union County.

Most of the retail space was small – less than 2,000 square feet – and located on the northern side of the downtown. The report showed that there were significant opportunities to build larger stores on the southern side of the district. Township officials also began to realize that the Raritan Valley Line, which bisects the downtown, should become the centerpiece that links the district, not divides it.

By 2000, Cranford Township had designated two underutilized sites as “Areas in Need of Redevelopment,” and major projects are now underway in these areas:

Also in 2000, Cranford received a Smart Growth grant that was used to develop a Downtown Vision Plan, a blueprint that identified growth areas for new retail and residential units and provided recommendations for parking, pedestrian and public space improvements. The result is that nearly $20 million in private investment has been made in downtown Cranford, mostly by existing business and property owners for building renovations or opening new stores. These investments have not only included the upgrading of retail space, but also the renovation of previously vacant upper floors into highly desirable apartments due to the proximity to public transportation.

The investment trend has even spilled over to the outskirts of the downtown. The Township designated several areas in need of redevelopment or rehabilitation to encourage development with the ability to set design standards that preserve the community’s history and character. These areas are outside of the SID but still within the Transit Village boundaries. Several projects, including banks, age-restricted housing and a pharmacy chain, are under construction or in planning.

Cranford received a $200,000 grant upon designation as a Transit Village (2003). The funds were used for a year-long study of traffic circulation, parking and pedestrian improvements that would be necessary to accommodate current conditions and anticipated growth. Township officials worked closely with planning and Transit Village officials at the NJ Department of Transportation, NJ TRANSIT and a consultant, Vollmer Associates. The final report has already proven to be a valuable tool for elected officials, the planning board and professional staff.

Mayor George Jorn emphasized this comprehensive approach in a letter to township residents: “We are seeing economic development and downtown revitalization at its best; projects that will bring new retail, people living and working downtown and attractive public spaces for all to enjoy. My colleagues on the Township Committee are committed to sensible and sustainable growth that respects and blends easily into our town.” He added, “Cranford is fortunate to have development partners, State and Transit officials who understand that goal. Development is not short term but something we will live with for a very long time.”

December 26, 2010 Steph_Admin Comments Off on New Mixed-Use Project: The Avenue at South Orange