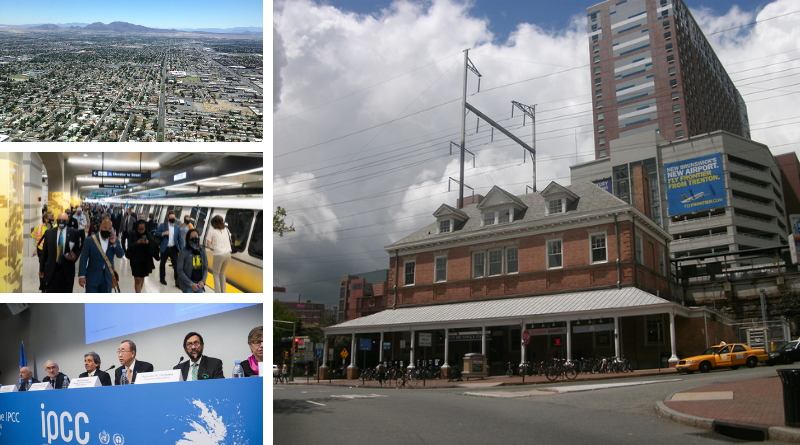 Following the revocation of the mask mandate last week, many medically vulnerable transit riders and operators are rethinking the safety of their daily commute as cities like Boston and D.C. are witnessing a rise in infection rates. While the Omicron variant has faded, the devastation it caused last year, decimating transit agencies while exacerbating driver shortage and pushing employees out of work, still looms large. John Costa, international president of the Amalgamated Transit Union, viewed the lifting of the mandate as a mixed blessing since mask requirements were a source of tension between noncomplying riders and bus drivers who felt obligated to enforce the order, making them targets of violent attacks. However, Daniels-Finegold, an advocate for accessibility on public transit and a highly vulnerable commuter, said she is disappointed the mandate ended as the BA. 2 variant spreads rapidly.

Here’s Why You Might Still Want to Wear Masks on Public Transport
Will Stone & Maria Godoy, NPR, April 22, 2022
Although the risk of COVID-19 infection depends on the mode of transport and the trip duration, scientists advise commuters to keep face masks on irrespective of the rules. Air travel is considerably safer than other modes since the air is exchanged every few minutes. Ventilation is more of a concern on city buses and subways. According to Neil Sehgal, assistant professor of health policy at the University of Maryland School of Public Health, this also raises equity concerns, as most riders of city transit are people of color.

Covid Is Not Over Yet: Need to Wear Masks on Public Transit in These US Cities
Bloomberg Mint, April 20, 2022
Despite the lifting of the federal mask mandate on public transit, many transit agencies, including New York’s Metropolitan Transportation Authority, the Chicago Transit Authority, the San Francisco Municipal Transportation Agency, and the Massachusetts Bay Transportation Authority, still require commuters to wear a mask. Transit agencies in New Jersey and Texas, and services such as Uber and Lyft, made wearing masks optional for their staff and passengers.

NEW BRUNSWICK–Heartland: You Shouldn’t Need a Car to Live in the Suburbs
Maxwell Pociask, The Daily Free Press, April 26, 2022
New Brunswick in central New Jersey, is a transit-oriented suburb where one can function without owning a car. Located on the Northeast Corridor, and with access to the New Jersey commuter rail network, New Brunswick residents can commute to New York City on a daily basis or to travel further to Boston and Washington, D.C. The City has completed a road diet project, a process where larger arterial roads are repaved and redesigned to divert traffic and increase safety. Local events, such as the Ciclovia project, an initiative that opened routes along city streets to only pedestrians and cyclists, encourage residents to live a car-light lifestyle.

JERSEY CITY–Is a New Path for Public Transit Coming to Jersey City?
Al Sullivan, TAPintoJerseyCity, April 24, 2022
Officials, including Mayor Steven Fulop, Hudson County Executive Tom DeGise, and U.S. Senator Bob Menendez, are seeking the construction of a new PATH station to the west of Journal Square to serve the rapidly growing west side of Jersey City. A study of station feasibility supports construction of the new Marion Street PATH station in an area near new development. Mayor Fulop encouraged the Port Authority of New York and New Jersey to explore construction of the new station, which would serve 20,000 residents who live within walking distance, 30 percent of whom do not own cars. He added that the City is looking to developers to finance construction of the two-platform, ten-car above-ground station using existing tracks designed for such a station.

CONNECTICUT–The Freedom to Divide: Zoning and Segregation in Connecticut
Morgan Finn, The CT Mirror, April 28, 2022
The dismissal of H.B. 5429, a bill that encourages transit-oriented development, proves that more needs to be done to advance equitable and inclusive growth in Connecticut. The bill proposed to allow municipalities to build, as of right, an average of 15 homes near at least one train or CTFastrak station and dedicate at least 10 percent to affordable housing. The state has 40 towns with at least one train or CTFastrak station but only large and diverse cities like Hartford and Bridgeport facilitate high-density development around transit stations. Research has shown that restrictive zoning laws maintain economic and racial segregation by limiting people’s housing choice and, in turn, exacerbating health disparities.

FLORIDA–Transportation Equity Will Mean Reducing Overall Costs
Skip Descant, Government Technology, April 22, 2022
Car-oriented planning and low investment in public transit are a barrier to transportation equity: median-wage earners in Tampa spend 25 percent of their income on transportation. Consequently, the Hillsborough County Board of Commissioners recently approved a one percent increase in the sales tax, 45 percent of which will go toward transit improvements. Tampa has also explored the free rides concept, as have cities like Los Angeles and Kansas City. Free rides have been successful in Tampa, where a two-mile streetcar that has been free for about three years, witnessed higher ridership in 2021 than the entire 61-mile SunRail system.

COLORADO—A Massive Affordable Housing Proposal Goes to a Full City Council Vote, as a Parking Feud Foments
Kyle Harris, Denverite.com, April 27, 2022
Over the last decade, Denver has added more than 115,000 residents. According to the Denver Housing Authority, the City is lacking tens of thousands of units of income-restricted housing as well as units for middle-class residents. To address this growing challenge, the Community Planning and Development has been working on draft plans that would reduce obstacles preventing developers from building more housing—plans that would eliminate parking requirements for transit-oriented developments, increase height restrictions, and cut permitting fees. But as the June 6 vote by the City Council nears, the sticking point appears to be whether developers should be allowed to build near high-speed bus lines without providing parking if they create extra affordable housing.

CANADA–Vancouver Council Approves 39-Storey ‘Urban Placemaker’ Rental Tower on Broadway
Mike Howell, Vancouver is Awesome, April 27, 2022
Vancouver City Council approved the construction of a 39-story rental tower at the northeast corner of Broadway and Granville. The mixed-use project will be integrated with a new subway station under construction on the property and will be one of the tallest buildings in the region. The tower will feature 223 rental homes, 45 of which will be rented at below-market rates, as well as retail and office space on the lower floors. However, councilors Pete Fry and Rebecca Bligh voiced concerns about the need for 300 parking spaces in a development designed to encourage people to use transit instead of driving their cars.

International Climate Report Demands ‘Systemic’ Changes to Transportation and Urban Planning
Christian MilNeil, StreetsBlog Mass, April 22, 2022
According to the latest report by the Intergovernmental Panel on Climate Change (IPCC), cities and transportation agencies will need to transform themselves to curtail climate pollution and limit warming to 1.5° to 2° C above 20th-century temperatures. The report’s Summary for Policymakers recommends an immediate shift from car-dependent infrastructure through compact cities, transit-oriented development, mixed land-use and co-location of jobs and housing, and reallocation of street space for active mobility. Policymakers will need to adopt most of the report’s recommendations to reduce greenhouse gas emissions between 23–26 percent by 2050 compared to the business–as–usual scenario.

May 23, 2009 Steph_Admin Comments Off on Battling Sprawl in Tysons Corner, Virginia