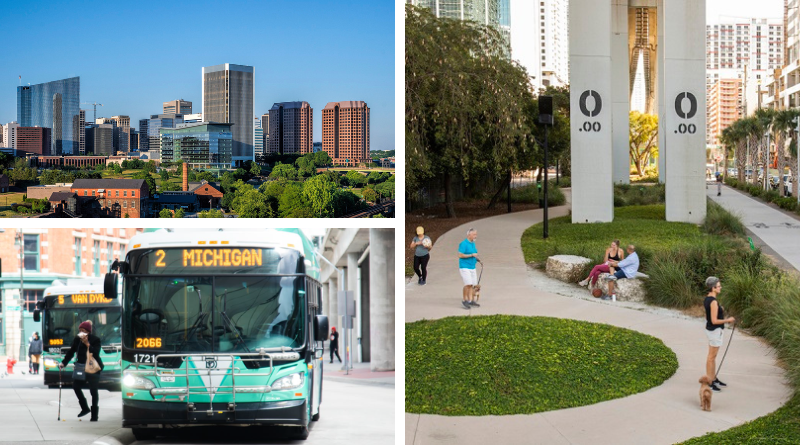 CALIFORNIA—California Fights Its NIMBYs
Conor Dougherty and Soumya Karlamangla, The New York Times, September 1, 2022
State officials have begun to take a more active approach to enforcing California’s housing laws and policies—buoyed in part by a shift in public opinion about affordability. Over the last several years, the state legislature has enacted measures to increase housing supply and affordability through rent control, accessory dwelling units, and changes to single-family zoning rules. Now, rather than looking again to changing law, the state is following a simple policy: laws good enough to sign are good to enforce. Using $4 million allocated to create a housing Accountability and Enforcement unit, the Department of Housing and Community Development has sent letters to local governments about their failure to comply with state housing regulations and conducted an unprecedented review of San Francisco’s housing approval process.

MICHIGAN—Ridership Is Down on DDOT Bus Routes. Here’s Why
Arjun Thakkar, Detroit Free Press, August 31, 2022
Plans to improve bus service frequency and quality are among the issues to be addressed as part of DDOT Reimagined, the planning effort currently under way by the Detroit Department of Transportation (DDOT). DDOT reports that ridership figures for transit services remain at about 40 percent of the pre-pandemic level when the city served about 70,000 riders a day. According to a DDOT official, several factors contribute to this, including the challenge of retaining and recruiting operators. DDOT Reimagined is expected to address how the agency recruits and retains drivers and will provide more seamless and integrated travel throughout the city.

HUDSON COUNTY—Commuter Tunnel Under the Hudson Won’t Be Finished Until 2035
Dana Rubinstein, New York Times, August 31, 2022
Expected costs for the Gateway infrastructure project linking New Jersey commuters to Manhattan have recently risen to $16.1 billion: an amount that is $2 billion more than previous expectations. An official from the Gateway Development Commission cites “market volatility and inflation” for $1 billion of the increase but the new estimate also includes an expectation that the project will take three additional years and will be completed by 2035. This unfortunate timing draws attention to the planned 2034 shutdown of the existing tunnel to address damage accrued over a century of use. Still the project continues to enjoy political commitments on both sides of the Hudson River and from Amtrak.

JERSEY CITY—Via Jersey City Surpasses One Million Ride
Al Sullivan, TapInto, August 30, 2022
Looking to provide transit options to residents who live a distance from Jersey City’s numerous bus and light rail stations, the city launched its microtransit service in February 2020, in collaboration with Via. That service recently reached a milestone—having provided more than a million rides. The on-demand service focuses on areas once considered “transit deserts” and is designed to expand the reach of existing transit services and provide fairer access to work, school, and medical facilities. Jersey City transit hubs are common drop-off and pick-up points, showing the promise of the service as a tool that allows for transit-oriented living beyond circumscribed transit areas.

WOODBRIDGE—Downtown Woodbridge to Get Splashes of Color
Tony Gallotto, TapInto Woodbridge/Cateret, August 28, 2022
Investing in a beautification project in its downtown, Woodbridge plans to soon greet train commuters with murals by local artist, Olga Muzician. The two separate sites include a $9,500 mural within sight of the NJ TRANSIT rail station and a $5,000 exterior wall painting located at 117 Main Street. Olga Muzician has previously painted for the Edison Community Beautification Project, and it is hoped her work will support a sense of place in Woodbridge’s transportation center.

FLORIDA—How Miami’s New Linear Park Is Using ‘Community-Centered Technology’ to Bridge the Digital Divide
Meg Daly, Brookings, August 30, 2022
The City of Miami is using a 10-mile stretch beneath an elevated Metrorail line to build a public space called the Underline that will provide free high-speed internet. More than 30 percent of Miami households lack internet access, leading the city to expand its equity vision for the Underline. Nearly a dozen wi-fi access locations serving up to 2,200 users are already available as part of its first phase, which opened in February 2021. Plans for the Underline also call for walking trails, biking infrastructure, and local art to promote the City’s goals of social cohesion and inclusion.

INDIANA—State Budget Committee Approves Seven Transit Districts
Andrew Steele, The NWI Times, September 1, 2022
The Indiana State Budget Committee has endorsed the creation of Transit Development Districts around seven stations on the South Shore Line, a commuter line connecting South Bend and Chicago, and the West Lake Corridor, a commuter line that will connect Lake County to Chicago. In each district, a one-half square mile area, property and local income taxes will be used to accelerate development and support public infrastructure investment around the commuter rail stations.

NEW YORK—MTA Announces Opening of Second Section of LIRR Main Line Third Track
Mass Transit, August 31, 2022
Only two weeks after opening the first section of a third track to the Long Island Railroad (LIRR), the Metropolitan Transit Authority (MTA) has announced the completion of the project’s second section. In addition to many improvements, such as upgrading 36 stations and 17 bridges, the completed project will allow the LIRR to increase its service by 40 percent. Having begun construction in 2018, the LIRR is set to finish construction on time by the end of 2022 and $100 million under budget.

TEXAS—El Paso Aims for Streets That Are Friendly for All Users
American Heart Association, August 31, 2022
The City of El Paso has voted unanimously in favor of its Complete Streets policy to improve street safety and walkability in their community of 670,000. The city’s new policy will analyze all future road work to see how it promotes a safe, equitable multimodal transportation network. The policy came about in part through a two-year long partnership between the city and the El Paso Complete Streets Coalition, led by the American Heart Association. Smart Growth America ranked El Paso the 18th most dangerous city for street safety in its most recent Dangerous by Design study. The city is set to receive more than $20 million in federal funding to support transportation and infrastructure improvements, including funds to support transportation equity.

VIRGINIA—City Looks to Extend TOD Zoning Along Southside Commercial Corridors
Jonathan Spiers, Richmond Biz Sense, August 29, 2022
Stakeholders in the capital of Richmond are looking to expand transit-oriented development southward in the city, past the James River. A committee of the city council has endorsed a resolution that would change zoning along Richmond Highway (US-1), Midlothian Turnpike, and Hull Street to TOD-1 or “Transit-Oriented Nodal District.” Currently bus rapid transit (BRT) service operates north of the river, but this push by the council signals their intentions to upgrade these corridors with “sidewalks, bike lanes, [and] good roads that also support pedestrian crossing” to ultimately support further high-frequency transit, according to Councilmember Andreas Addison.

Too Many Americans Live in Places Built for Cars — Not for Human Connection
Muizz Akhtar, Vox, August 25, 2022
By prioritizing automobile travel over human scale design, American cities have created alienating built environments that limit opportunities for social interactions. The sprawl of Sunbelt cities has resulted in spatial barriers between neighbors, friends, and families. Autocentric sprawl also reduces the mobility and social freedom of the young, the elderly, and those with disabilities by requiring driving as a prerequisite for independent travel.

INDONESIA—TransJakarta to Help Manage Greater Bandung Bus Rapid Transit
Dewa W., Kenzu T., Antara News, September 1, 2022
As Greater Bandung in West Java continues to urbanize, its commitments to bus rapid transit (BRT) will have a new ally through a new partnership with PT TransJakarta, a bus service company from the capital city of Jakarta. Jakarta city officials made strides in orienting urban development toward TOD approaches with electric buses, representing a benchmark for other Indonesian cities to pursue. PT TransJakarta’s experience could help Greater Bandung better handle the unique learning curves of BRT and speed up the region’s transition away from private vehicles.

CANADA—Do SkyTrain Expansions Really Better Vancouver’s Affordable Housing Problem?
Howard Chai, Storeys, August 30, 2022
The 16-km expansion of the Surrey-Langley SkyTrain, which will result in eight new stations, has generated a significant sense of optimism by being ahead of schedule and under budget. However, critics remain skeptical of its impact on affordable housing in the Vancouver region. SkyTrain expansions have historically facilitated transit-oriented development, as envisioned by local transit authority, TransLink, but studies looking at local markets suggest that previous expansions have increased housing prices after completion.