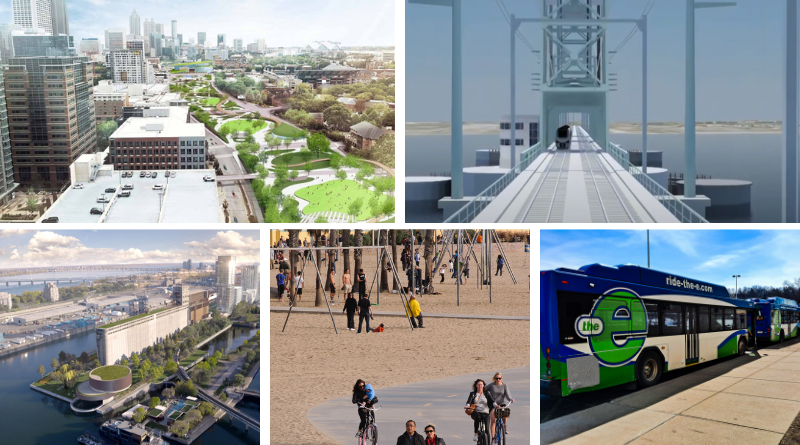 GEORGIA—Official: Midtown’s Ambitious Highway Cap Has ‘a Lot of Momentum’
Josh Green, Urbanize Atlanta, August 10, 2022
The Midtown Connector has been announced as the third highway capping proposal for the “city in a forest.” The 25-acre park project would connect downtown Atlanta’s Stitch greenway proposal to the HUB404 Conservancy, curving over a freeway with elevated pathways. Proposed amenities include cafes, dog parks, playgrounds, and an amphitheater. The project would also fully reconnect the Georgia Institute of Technology and improve pedestrian connectivity where freeway exits presently hinder on-foot travel.

Group of 23 States Tells U.S. Court CDC Lacks Authority to Set Transit Mask Rules
David Shepardson, Reuters, August 9, 2022
Legal battles have intensified over the authority of the Centers for Disease Control (CDC) to set mask mandates for those riding public transit. Attorneys General in 23 states, led by Florida, have claimed in federal court that the CDC does not have the legal power to impose national transportation mask mandates. After a January 2021 federal mandate, there have been conflicting efforts within the justice system on whether the CDC can require masks on airplanes, buses, trains, in ride-share vehicles and in transit hubs lawfully. Beyond COVID-19, legal deliberations on this matter will shape how public health emergencies on transit can be dealt with by the federal government in the future.

PENNSYLVANIA—Over $6 Million in Federal Funding is Headed to the Erie Metropolitan Transit Authority
Erie News Now, August 9, 2022
The Erie Metropolitan Transit Authority (EMTA), which operates in northwest Pennsylvania, will receive more than $6 million in COVID-19 relief funds authorized by the Infrastructure Investment and Jobs Act (IIJA). The Authority plans to use the funds to cover gaps in operating budgets and maintain pandemic-related safety protocols. Senator Bob Casey referred to this funding as a “significant investment” that will help the EMTA keep fares stable and affordable for its customers.

N.J. Ranks 19th Worst for Pedestrian Deaths, Study Says
Larry Higgs, NJ.com, August 9, 2022
A report by Smart Growth America ranked New Jersey as the 19th worst state for pedestrian fatalities. Examining pedestrian fatalities on a per capita basis, the “Dangerous by Design” report noted an 18 percent increase in such deaths between 2016-2020 nationally, despite a 13 percent decrease in driving within the same time period. Smart Growth America cited the cause as misguided road design that prioritizes vehicle speeds over safe crossing for pedestrians. The organization advocates for greater attention to design measures (such as road diets and curb extension) to rectify this imbalance in priorities.

PERTH AMBOY—Trains have had to slow down on this N.J. bridge since Sandy. A new span will replace it.
Nicholas Fernandes, NJ.com, August 5, 2022
NJ TRANSIT has made progress this week on the new Raritan River Bridge, which will replace a 1908 railroad bridge on the North Jersey Coast Line. Damage from Superstorm Sandy means that trains must operate at speeds slower than called for on the original bridge, making its replacement more than a preventative measure. Work on the new bridge is roughly half complete and incorporates consideration of risks posed by the floodplain. The project is expected to be finished by 2026.

BAYONNE—Bayonne Planning Board Approves 18-Story Silk Lofts Tower
Daniel Israel, Hudson Reporter, August 10, 2022
The recently amended Silk Lofts redevelopment plan will now allow for two major mixed-used residential and commercial buildings on the Bayonne site. One building will be 18-stories in height—notable as the structure will replace a five-story multifamily building, and will not require a variance. The redevelopment will utilize local union labor and convert much of the site’s current parking into additional residential buildings.

OHIO—Maintaining Transit Equity Amidst the Transition to Digital Ticketing
Leah Hockley, Intelligent Transport, August 10, 2022
This interview with Katherine Conrad, Director at NEORide, discusses the future of smart ticketing, which includes contactless, mobile payments and account-based on-demand ticketing. Conrad talks about how equity is paramount in the provision of public transportation and how NEORide works to ensure that any switch to credit card and smartphone payments does not present a barrier to riders who do not have access to those options. NEORide plans to implement smartcards for riders without other payment options and has begun efforts to cap fares through their EZfare payment system.

U.S Department of Transportation Announces Research Funding to Improve People’s Access to Transportation
Federal Transit Administration, US Department of Transportation, August 9, 2022
The Federal Transit Administration (FTA) has announced $6 million in funding for projects and research to improve people’s access to affordable transportation. To realize the equity aims of the current administration, special focus is to be given to areas that currently lack efficient and convenient transit options. FTA Director Nuria Fernandez stated that “transit is the great equalizer” and conveyed that the funding will ideally break down barriers that stifle social, employment, and educational opportunities for socioeconomically vulnerable Americans.

ILLINOIS—Parsons Apartments Affordable TOD Developer Bickerdike Will Build New eTOD at City Lit Site
Courtney Cobbs, Streetblogs Chicago, August 5, 2022
The creation of more equitable transit-oriented development (eTOD) housing continues to be a chief concern in Chicago. Work by affordable housing developers such as the Bickerdike Redevelopment Corporation is helping to address this need. Bickerdick has been chosen by the Chicago Transit Authority (CTA) to develop a site near the Logan Square Station, which formerly housed the original station entrance. This project would be Bickerdike’s second all-affordable TOD project near the Logan stop, following the May 2022 completion of the Lucy Gonzalez Parsons Apartments. The CTA will lease the site to Bickerdike for 105 years. Birkerdick plans to build 105 units and 6,000 square feet of street-facing retail space.

CALIFORNIA—The ‘Nuclear Option’ in L.A.’s War to Rein in the Mighty Car, Make Streets Safe
Rachel Uranga, Los Angeles Times, August 10, 2022
Los Angeles may soon have to implement walkable and bikeable street features each time the city repaves a street, which would fast track the city’s 20-year plan to create hundreds of miles of more walkable and bikeable streets. Seven years into the plan, Los Angeles has met only three percent of its goal—a result that confounds stakeholders. The proposed 2024 voter initiative has drawn support and criticism among bike advocates, some of whom cite the need to address issues of inequity when making such improvements. The measure cleared approval with the city clerk and now the City Council must decide to send the initiative to voters or adopt it.

RHODE ISLAND—$22.37 Million Federal RAISE Grant Will Enable All Newport-Based Transit Services to Be Electric
Ryan Belmore, What’s Up Newport, August 10, 2022
Federal funding in the form of a $22.37 million Rebuilding American Infrastructure with Sustainability and Equity (RAISE) grant has been afforded to the Rhode Island Public Transit Authority (RIPTA). With this support, RIPTA plans to convert Newport’s diesel buses into an entirely electric service. A press release notes that the grant will pay for charging infrastructure, facility upgrades, and the procurement of approximately 25 electric buses.

Why We Can Fix Big-City Transit — and Why We Need To
Aaron Renn, Governing, August 8, 2022
Transit services represent an issue where local governments can make direct positive impacts on the lives of residents through singular construction projects. Improved transit services could build faith in the processes undertaken by governments, but American cities continue to grapple with globally low frequency transit service and abnormally high transit infrastructure costs. Overcoming these hurdles and improving transit could help legitimatize the public sector to Americans, facilitate urban developments, and spark broader economic growth.

COLORADO—In Colorado Mountain Towns, “Even Living Out of Your Car Is Gentrified”
Bruce Finley, The Denver Post, August 7, 2022
The growing recreation economy in the mountains of Colorado continues to drive demand for housing, displacing locals and employees whose wages have failed to keep up with the cost of living. Many have resigned themselves to sleeping in their vehicles or in recreational vehicle parks. These residents vie for space with tourists traveling the country in their vans and RVs, particularly in towns that place restrictions on sleeping in one’s vehicle.

MASSACHUSETTS—Could Trolleybuses Be the Incredible Solution for Greener Public Transit?
Henry Pan, The Guardian, August 5, 2022
As the Massachusetts Bay Transportation Authority (MBTA) discontinues use of its decades-old electric trolley bus service and adopt the use of battery-electric vehicles, debate has arisen regarding whether it is the environmentally and technically correct decision. Critics note that trolley buses are more energy efficient and do not rely on supplemental diesel fuel to warm batteries in below-freezing temperatures as is the case with non-trolley EV buses. Other American cities such as Dayton, Ohio, and San Francisco remain more committed to the use of trolley buses, citing their increased power and better resilience in colder temperatures.

CALIFORNIA—These Developers Want to Build a Lot of Housing at the North Concord BART Station
Shomik Mukherjee, The Mercury News, August 1, 2022
Seeking a route to developing the North Concord Bay Area Rapid Transit (BART) station’s sprawling parking lot, BART is accepting unsolicited development proposals from parties interested in the site. Charging $25K for BART staff’s time in reviewing proposals, the process is meant to encourage “fresh ideas,” which ideally will differ from previous proposals for the spacing surrounding the North Concord BART station. Affordable units remain a critical consideration for the project, as well as for San Francisco broadly, and many developers jockeying for the site will likely have to make major commitments to this housing to achieve success with their proposals.

CANADA—Industry Alliance Planning a Massive Revitalization of Areas Near Old Montreal
Grant Cameron, Construct Connect, August 10, 2022
An association of developers, architects, builders, and planners is developing a plan to revitalize the 2.3 sq. km. Bridge-Bonaventure and Pointe-du-Moulin region near old Montreal. Their vision calls for more than 1,400 family units, 7,500 new housing units, retail businesses, and significant redevelopment in the vicinity of the docks. The plan attempts to balance growing housing needs and employment opportunities while providing community spaces, REM light-rail services, and the development of a transit hub. The residents will have access to a diverse range of active transportation and mass transit.

INDIA—Phase-1 of Bengaluru Airport City to Open by 2025
S Lalitha, The New Indian Express, August 8, 2022
The 463-acre Smart City along Kempegowda International Airport (KIA) premises will serve as a transit-oriented development model, providing access to airport terminals, roadways, Metro, Suburban rail, and the proposed hyperloop. The public realm will comprise a concert arena, retail, dining, and entertainment (RDE) Village, a business park, and a hotel that provides a continuous link to transit, facilitating employees’ and visitors’ movement throughout the development.