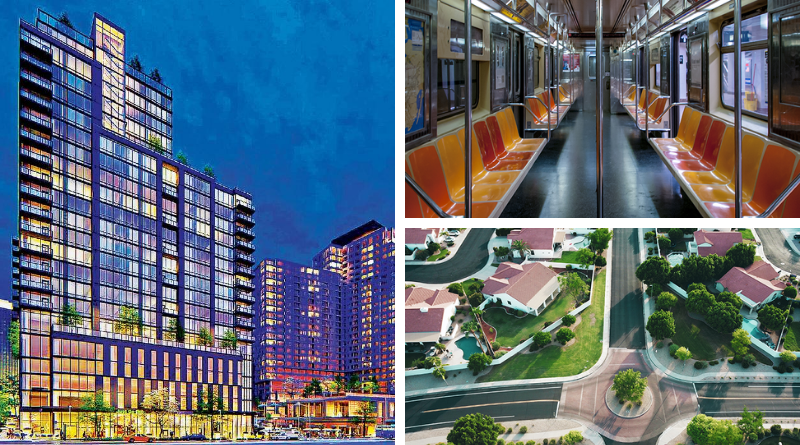 Five Ways to Staying Safe on Public Transport During the COVID-19 Pandemic
Travel News Daily, August 10, 2020
As some countries begin to ease COVID-19 lockdown measures and travel regulations are opening up for domestic travel on trains, buses, and taxi­s, Travel News Daily compiles five ways that Americans can travel more safely when using public transportation. Wearing masks and washing hands or using hand sanitizers remain at the top of the list, as well as social distancing and using contactless technology. Another way is opting for off-peak travel times and using alternative routes to avoid crowded rush hour periods.

NEW YORK—What Happens to Viral Particles on the Subway
Mika Grondahl, Christina Goldbaum and Jeremy White, The New York Times, August 10, 2020
This interactive feature demonstrates the importance of good air flow (in addition to masks and social distancing) to reduce the risk of exposure when traveling on public transit vehicles. Aboard New York City’s subways, ventilation units fully replace air in a car with outside air about every three minutes and 20 seconds, or at a rate of 18 times an hour – much higher than the recommended exchange rate for offices (6-8 times an hour) or classrooms (3-4 times an hour).  While the ventilation and air filtering help to limit exposure, masks remain essential. Moreover, increased crowding, such as would limit the ability for riders to distance themselves, may increase risk of exposure.

Why It’s Not Quite Time to Give Up City Living
Kaley Overstreet, ArchDaily, August 10, 2020
Despite speculations that urban spaces were doomed to be abandoned for more spacious suburban and rural areas, industry experts believe that a mass exodus from the city is unlikely, even as the pandemic continues. Reportedly, some suburban towns are seeing “an uptick in real estate activity.” However, data from Zillow home searches show that often urban dwellers are searching through listings in other similar cities, not suburban spaces. Though the COVID-19 pandemic has been a shock to real estate sales, rental markets in cities continue to grow overall.

In Atlantic City, Developers Envision Attractions Beyond the Boardwalk
Deborah P. Carter, New Jersey Monthly, August 5, 2020
The current issue of New Jersey Monthly Magazine looks at the developers behind Atlantic City’s revitalization of The Orange Loop, located a short walk from the NJ TRANSIT Atlantic City bus and train station. Pat Fazano of NY Orange Deeds is looking to change perceptions and “bring the fun and excitement back to Atlantic City.” He, in collaboration with other developers, are focused on 20 contiguous properties where new and updated establishments are now going up. Together they aim to transform Atlantic City’s entertainment, dining, and hotel experience by closing down strip joints, crumbling hotels and apartments, and replacing them with upscale residential spaces, artisanal coffee shops, restaurants, and bars with live music.

Ground is broken on the new $40 million Pawtucket/Central Falls Transportation Hub, for both trains and buses. Expect service after construction’s finishing in Spring/Summer 2022. The full story 5:30 PM on NBC 10 News, WJAR-TV Providence pic.twitter.com/MHZoeaQ5mg

RHODE ISLAND—Pawtucket Receives $400,000 to Promote Sustainable Development in Train District
Kayla Panu, The Valley Breeze, August 12, 2020
Last June, the Rhode Island Department of Environmental Management awarded Pawtucket a $400,000 grant, which the city plans to use to bolster development in their transit-oriented development (TOD) district and improve green storm water infrastructure (GSI) along Pine Street. Since 2018, the City has planned for the construction of a train station and surrounding TOD as part of a larger effort to create a green corridor. Since taking his position last June, City Engineer David Kurowski has been working to bring sustainable development to the City and anticipates the addition of crosswalks and the improvement of sidewalks and pedestrian infrastructure with ADA accessibility. The funding will also go towards the addition of new trees along the streets.

PENNSYLVANIA—Philly Developers Propose Thousands of New Apartments in a Rush to Beat the Tax Abatement Change
Inga Saffron, The Philadelphia Inquirer, August 10, 2020
Developers and Philadelphia’s Civic Design Review Board will be working closely together over the next few months as companies rush to present their project proposals and gain construction approval before the City’s 10-year tax abatement policy expires at the end of this year. This month alone, the board will review plans for riverfront developments, glass skyscrapers, block apartments, and mid-rises that could bring 3,600 new apartments to the city—just slightly less than the total number of housing units approved in 2019. More applications are scheduled for review in September.

MARYLAND—Montgomery County Takes a Major Step Toward Ending a Housing Moratorium
Jane Lyons, Greater Greater Washington, August 7, 2020
Montgomery County Council will review a proposal for a new policy, the Subdivision Staging Policy, following sign-off by the Planning Board earlier this week. The policy would end the moratorium on development in areas with overcrowded schools and allow denser development for high growth areas, especially those within 500 feet of existing and future bus rapid transit (BRT) lines. The policy also seeks to lower school impact taxes and transportation impact taxes in desired growth areas and Opportunity Zones. The County hopes that the reduction in taxes and fees for developers will translate into lower rent costs for residents. The review process will begin in September and voting will take place by November 15, 2020.

Why Sprawl Could Be the Next Big Climate Change Battle
Lauren Sommer, NPR, August 6, 2020
The battle over zoning codes continues even as many municipalities and states shift towards eliminating single-family zoning restrictions in American suburbs. Single-family zoning is seen by many as part of a legacy of systemic discrimination and racial and economic barriers that kept homeownership unattainable for many lower-income households. This feature by NPR examines the effects of sprawl in California and the message that it sends with its resistance to densification. “Even in California’s liberal suburban enclaves with Black Lives Matter signs everywhere, residents and local elected officials are still hostile to opening their communities up to housing that would bring people with diverse backgrounds and incomes,” writes Director Ethan Elkind of UC Berkeley’s climate program and law school.

NEBRASKA—$500 Million Plan in Place to Transform Omaha’s Crossroads Mall Area
Cindy Gonzales, Omaha World-Herald, August 5, 2020
After a decade of “fits and starts of redevelopment” for a dying shopping mall, Mayor Jean Stothert and developers Lockwood Development and Century Development have reached agreement on a plan for Omaha’s Crossroads. Plans for the 40-acre site call for 500,000 sq. ft. of offices, 250 apartments, 130 senior living spaces, 150 hotel rooms, 200,000 sq. ft. of retail stores and venues for fitness, dining, and entertainment as well as a stop on the planned Omaha Rapid Bus Transit (ORBT) route. The mayor anticipates using $12.5 million in redevelopment bonds for infrastructure improvements and the Lockwood-Century group plan to seek City approval of tax-increment financing and an occupation tax to help fund the project. The groundbreaking is expected to be held in October.

Want More Housing? Ending Single-Family Zoning Won’t Do It.
Emily Hamilton, Bloomberg Citylab, July 29, 2020
What does it take to build more equitable development? This transformation has just begun as more communities move to abolish single-family housing and combat inequitable zoning laws. Drawing on examples from Minnesota, Oregon, Texas, and New Jersey, Emily Hamilton, Research Fellow and Director of the Urbanity Project with the Mercatus Center at George Mason University, explores the challenges to building more equitable housing and the places where these challenges are starting to be overcome. To support affordable housing and the development of more compact, mixed-use spaces, cities still need to change legislation on parking and building and lot sizes. Changes such as these encourage the kind of infill development that cities need to meet the demands of growing populations at all income levels.

THAILAND—Thailand to Develop Central Province of Ayutthaya as National High-speed Rail Hub
Xinhua News Agency, August 13, 2020
On Thursday, the Ministry of Transport announced that a consortium of public-private partnerships will invest 31.9 billion baht (US$1 billion) to develop the Central Province of Ayutthaya as a national high-speed rail hub. The project will connect Bangkok in the country’s south to Nakhon Ratchasima in the northeast, via Ayutthaya, a UNESCO World Heritage Site that was once the capital of the Kingdom of Siam. The construction project will make infrastructure improvements, such as double-track, a high-speed railway station, and sidewalk and road upgrades, and promote transit-oriented development through the construction of station buildings, offices, shopping centers and condominiums.

Transport and Inequality: Why Disparities in Access Matters in Cities
Anjali Mahendra, Darío Hidalgo and Schuyler Null, The City Fix, August 10, 2020
A fare increase in public transportation sent people to the streets last year in Chile, as residents could no longer take the inequities and accessibility issues in the nation’s capital. Chile is not alone in its public transportation woes, and the added strain of a global pandemic has brought to light inequities in the disproportionate effect of lockdowns on low income and high income parts of cities. This report by researchers from the World Resources Institute argues that disparate transit systems that provide transportation for only some parts of a city are not just inconvenient for individuals, but are “bad for the whole city.”