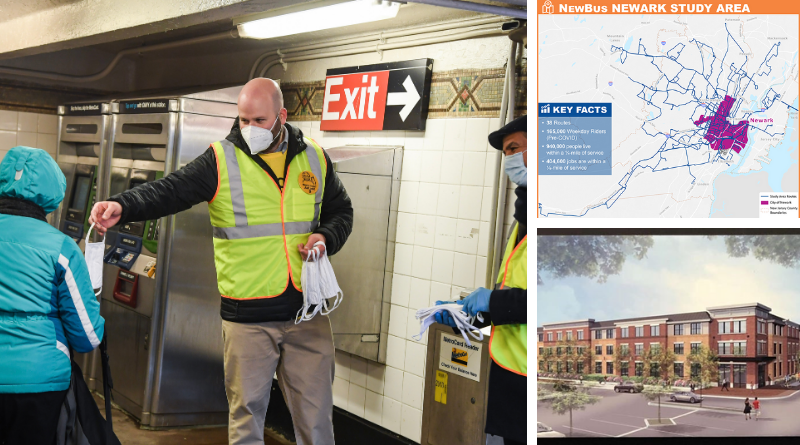 In this opinion article, Ben Adler, Senior Editor at City & State, discusses how the Biden administration has embraced a uniform approach toward addressing climate change across the executive branch of government. Adler views this as correction over the tactics of the Obama administration, which initially sought to advance environmental policy through legislation, and only used the power of executive action in his second term. Biden appears to recognize that most Cabinet departments can help reduce greenhouse gas emissions and improve climate resiliency. Among the most significant players in this shift are Transportation, and Housing and Urban Development which, when working in tandem with the Environmental Protection Agency, can help ensure investment in ecologically efficient programs such as building housing where it is well served by transit.

Today is the official launch of the Mask Force initiative & we want to thank everyone who has been involved so far. Please join us in doing your part to keep transit and each other safe by properly wearing a mask whenever you ride. #maskforcephilly pic.twitter.com/ltLeoxjeTc

IDAHO—Pocatello Regional Transit Offers Seniors Rides to COVID Vaccinations
Kalama Hines, EastIdahoNews.com, January 28, 2021
Pocatello Regional Transit (PRT) is preparing to transport older Idahoans to locations administering COVID-19 vacations. Working in partnership with the Area V Agency on Aging’s transportation program, PRT will offer all seniors 60 or older with door-to-door rides to their vaccination appointments. More than 250,000 Idahoans are over the age of 64, according to the state’s COVID dashboard, and they are expected to begin receiving the vaccination on February 1st. The rides are free, but a donation of $2 per trip — $4 per round-trip is suggested.

NEW YORK—MTA Mask Force Pays Off: New Survey Shows Higher Than Ever Mask Usage in MTA System
MTA Press Release, January 27, 2021
The Metropolitan Transportation Authority (MTA) kicked off the first Mask Force event of 2021, its seventh since inception, with the announcement of record customer mask usage. The MTA frequently surveys mask usage and observed a 97 percent mask usage rate among subway riders and a 99 percent mask usage rate among bus riders. To date, the MTA has acquired more than 21 million masks for distribution to customers and employees. The masks are distributed in many ways including the Mask Force, ambassador programs, free availability at stations, mask dispensers on buses, and PPE vending machines found throughout the MTA network.

Survey of Smaller Transit Operators Reveals Need for Additional COVID Relief
Community Transportation Association of America, Roads & Bridges, January 25, 2021
The Community Transportation Association of America (CTAA) released results of a recent survey of its rural and small-urban transit system members which identified a need for additional COVID-19 funding aid for such public transportation systems. The survey indicated that many CTAA members have spent down their CARES Act funding more slowly than the nation’s largest metropolitan transit properties, but are starting to run out of those funds. CTAA argues that without additional federal funding support, many small-urban and rural transit systems will face major service cuts.

Berkeley Heights Approves Affordable Housing at Former Kings Site
Mike Deak, MyCentralJersey.com, January 28, 2021
At its January 20th meeting, the Berkeley Heights Planning Board gave final approval of a plan from Berkeley Heights Redevelopers (part of JMF Properties) to build the Stratton House project on the former Kings shopping center site. Two four-story buildings will comprise a total of 211 apartments, with 32 affordable units. Plans also call for a five-story parking garage providing 394 parking spaces and a dozen charging stations. As part of a PILOT agreement, the developers will pay 10 percent of the project’s annual gross revenue to the municipality. Stratton is located within walking distance of the township’s commercial core and the Berkeley Heights Station on the NJ TRANSIT Morris & Essex Line.

Pleasantville Receives $250,000 Transit Village Grant
Vincent Jackson, The Press of Atlantic City, January 25, 2021
The City of Pleasantville will receive a $250,000 NJDOT Transit Village grant to enhance the corridor connecting to the Lakes Bay marina district, from the Black Horse Pike to Ansley Boulevard. Pleasantville was designated a New Jersey Transit Village in 1999 and concentrated its redevelopment efforts in the area near its bus terminal at Main Street and West Jersey Avenue.

NJ Transit Trying to ‘Reimagine’ Bus System in Newark
Eric Kiefer, Patch (Newark, NJ), January 25, 2021
On Monday, NJ TRANSIT announce the launch of the “NewBus Newark” initiative, an effort to redesign bus service in the greater Newark area. The area is served by 38 local bus routes and had up to 165,000 weekday riders before the pandemic. The redesign will closely examine the routes and neighborhoods serviced to create a “new intrastate bus network” to serve the region and accommodate changing travel patterns. NJ TRANSIT wants to hear from the community and has launched a customer survey and informational website available at njtransit.com/newbus.

WASHINGTON, D.C.—See the New Tysons Pedestrian Trail Connecting the McLean Metro with Surrounding Neighborhoods
Libby Solomon, Greater Greater Washington, January 28, 2021
Residents of neighborhoods near the McLean Metro station in eastern Tysons have a new option when traveling to the station. The Scott’s Run Trail, a curvilinear pedestrian walkway through Scott’s Run Park, is now open. Construction of the half-mile trail included a 10-foot wide ADA compliant paved path with lighting, signage, and handrails, and two steel frame pedestrian bridges to allow travel over a stream and tributary. The curvy design is intended to discourage its use by those on bicycles. The trail advances the Tysons Comprehensive Plan, which calls for a network of walkable routes and prioritizing access to Tysons’ four Metro stations.

FLORIDA—County Drafts Downtown Miami Transit-Oriented Revamp
Jesse Scheckner, Miami Today, January 26, 2021
After pandemic-imposed delays, Miami-Dade plans to advance a planned redevelopment of 32 acres in the downtown Government Center area. A report, meant to be a conceptual roadmap for the use of 34 county properties, should be completed by summer. These properties include the Stephen P. Clark building housing County Hall and the central hub of Metrorail and Metromover and are located within the Government Center Subzone, one of five subzones in the Fixed-Guideway Rapid Transit Zone county lawmakers created in 2014 to reclaim regulatory jurisdiction of Metrorail-adjacent properties within City of Miami limits. The vision for the future calls for a dense, pedestrian- and bicycle-friendly neighborhood with affordable housing and public amenities such as a modernized library and a new park.

PENNSYLVANIA—Study Looks at the Intersection of Transit and Land Use Planning
William O’Boyle, Times Leader (Wilkes-Barre, PA), January 24, 2021
A recent study by researchers at the Institute for Public Policy & Economic Development at Wilkes University explores how public transit has been disregarded in favor of passenger cars in recent decades, and how communities have begun to view the dominance of cars as a barrier to achieving sustainability and equity goals. Teri Ooms, Executive Director of The Institute, said the purpose of this report is to examine the practices, design schemes, and policy tools which municipalities can utilize to increase transportation options (including public transit) and thereby reduce inequity in transportation.

AUSTRALIA—Expressions of Interest Sought for Gosnells Town Centre Development Site
City of Gosnells, BusinessNews, January 27, 2021
The City of Gosnells, Western Australia, seeks Expressions of Interest for the development of a 3,391 sq. m. (0.84-acre) site located opposite the Gosnells Train Station. The site is city-owned and zoned as “Urban” under the Metropolitan Region Scheme and “District Centre” under Town Planning Scheme 6. According to Mayor David Goode, the site is suitable for multi-story mixed-use development with ground floor retail and a residential component. The City is interested in joint ventures or private development. Gosnells (population 133,000+) has made substantial investment in the area, including relocation of the train station, creation of Main Street, and streetscape and public art upgrades. Gosnells Station provides a direct railway link to downtown Perth.

CANADA—Rental Housing Proposed to Replace 7-Eleven at Kingsway and Joyce Street Corner
Kenneth Chan, Vancouver Urbanized, January 22, 2021
Local developer Hudson and design firm Yamamoto Architecture have submitted a rezoning application to replace a 7-Eleven with a new 74-foot-tall, six-story building called J@K. If built, the project will comprise 79 market-rate rental units and about 6,100 sq. ft. of ground floor commercial space. The site is accessible by Kingsway buses, Joyce Street buses including the R4 RapidBus, and is an eight-minute walk to SkyTrain’s Joyce-Collingwood Station. The proposal calls for a single underground parking level for 31 vehicles. Parking is supplemented with 91 bike parking spaces and a bike repair space.